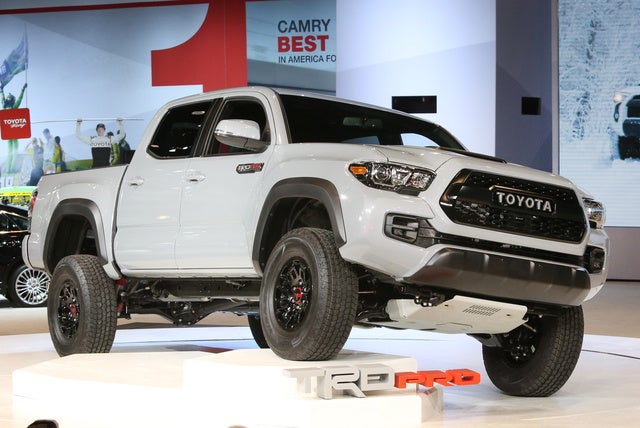 Serious off-roaders who—for whatever reason—don’t want to pull the trigger on a new Jeep Wrangler are going to find themselves looking a pretty small market segment, especially if they expect to spend about what they would have spent on a Wrangler. One option they might consider, however, is waiting around until fall 2016, when the new Toyota Tacoma TRD (Toyota Racing Division) Pro shows up on dealer lots. The Tacoma received a major redesign for 2016, and Toyota is following up with major upgrades to the TRD Pro off-road-oriented trim for 2017, basically creating a new generation-within-a-generation. Already a solid off-road performer, the reworked Tacoma TRD Pro should be able to handle most of the same extreme terrain as the Wrangler, but with a little more versatility, thanks to the fact that the Tacoma also happens to be a popular pickup truck and not a tunnel-vision off-roader like the Jeep.

Let’s start with the exterior. The Tacoma is a midsize pickup comparable to the likes of the Chevy Colorado, GMC Canyon, and Nissan Frontier, and it slots below the full-size Tundra in the Toyota lineup. The front end bears a resemblance to the 4Runner, a full-size Toyota SUV that also sports a TRD Pro trim, noticeably in its slanting headlights, upper grille line, and skid plate (regular Tacomas don't get a skid plate). Special to the Tacoma TRD Pro for 2017 are 16-inch black alloy wheels with Goodyear Wrangler all-terrain Kevlar-reinforced tires, LED daytime running lights, black bezels on both headlights and taillights, and a number of special TRD/4x4 badges. The Tacoma TRD Pro is essentially an upgraded version of the Tacoma TRD Off-Road 4x4 Double Cab Short Bed trim.

Putting the Tacoma TRD Pro’s off-road performance on par with that of the Wrangler requires an impressive lineup of drivetrain and handling technologies, beginning with a special TRD-tuned suspension. Part-time 4-wheel drive (4WD) comes standard, with an electronically controlled transfer case and automatic limited-slip differential. Trims equipped with the 6-speed automatic transmission include a crawl-control system that automatically adjusts the throttle and brakes using five low-speed settings, allowing the driver to keep his or her attention on the terrain. If equipped with the 6-speed manual, the Tacoma TRD Pro features an active traction-control system that uses the antilock brakes to regulate power flow to the front and rear wheels, creating traction where it’s most needed. Hill-start assist and a multi-terrain select system also come standard on automatic trims, keeping the truck from rolling backward or spinning out.

The Tacoma TRD Pro features a standard towing package with a Class-IV towing receiver hitch, transmission-fluid cooler (with the automatic), engine oil cooler, power steering cooler, 130-amp alternator, 4- and 7-pin connector, and trailer sway control. Max towing capacity should be the same as the 6,800 pounds you’ll find for other V6 Tacomas outfitted with the trailering package.

The Tacoma lineup offers two engines. The smaller of these is a 2.7-liter inline 4-cylinder (I4) that produces 159 hp and 180 lb-ft of torque, smallish numbers for a midsize pickup. But there’s also a 3.5-liter V6, thankfully, which is the engine you’ll find on the TRD Pro. The V6 produces 278 hp and 265 lb-ft of torque. This engine is the first Atkinson-cycle engine in its segment, using variable valve timing and advanced fuel-injection technology to improve gas mileage. Mileage estimates for the V6 engines are often as good as or better than estimates for the I4s; for instance, 2016 I4 Tacoma Access Cab trims outfitted with 4WD and the automatic transmission posted mileage numbers of 19 mpg city/22 highway/20 combined, while V6 trims with the same setup posted 19/23/20. Trims equipped with 5- or 6-speed automatics tell a similar story. The TRD Pro’s Double Cab configuration is somewhat larger than the Access Cab, and the EPA only rated the 2016 edition with the 6-speed manual, for 17/20/18.

The Tacoma’s interior was redesigned for 2016 just as much as the exterior, gaining a cleaner layout and some much-needed technology upgrades like Bluetooth hands-free integration and Siri Eyes Free. Toyota’s Entune infotainment system also includes a robust suite of apps such as Pandora and Yelp. Entune comes standard on the TRD Pro, along with an integrated navigation system, and is optional across the rest of the lineup. The seats and steering wheel in the TRD Pro are leather-trimmed (the seats are heated), the shift knob and floor mats are TRD-specific, and there’s even a GoPro camera mount on the windshield for documenting those particularly adventurous drives.

The Tacoma does offer helpful driver-assistance technologies like rear-park assist, blind-spot monitoring, and rear cross-traffic alerts—all of them, of course, standard on the TRD Pro. All Tacoma trims include a standard rear-view monitor, as well as the Toyota Star Safety System, which adds vehicle stability control, traction control, antilock brakes, electronic brakeforce distribution, brake assist, and brake-override technology. There’s also a standard full suite of airbags should a collision actually occur. The 2016 Tacoma scored 4 out of 5 stars on rollover tests with the National Highway Traffic Safety Administration, and the Insurance Institute for Highway Safety gave it scores of Good on the moderate front-overlap and side-impact tests.

Toyota has not yet announced pricing for the 2017 Tacoma lineup, including the TRD Pro. The priciest trim for 2016 started just south of $34,000, so we expect the TRD Pro to run a bit higher, putting it more or less on par with some of the pricier Jeep Wrangler or Wrangler Unlimited trims.

Josh it is allot better than previous models. but the motor is still outstanding. keep it up.

Guru32VDH have 2005 version, top paint is rusting off, so is the undercarage. What u don't here is all the other problems. Don't buy current versions of the truck because of transmission issues.

Users ranked 2017 Toyota Tacoma against other cars which they drove/owned. Each ranking was based on 9 categories. Here is the summary of top rankings.

Have you driven a 2017 Toyota Tacoma?
Rank This Car

What Is The Orange Traiangle With An Exclamation Point?

An orange triangle with an exclamation point in the center. What does the symbol mean? It's just shown up on my dash board.

Is There A Phone # To Talk About Prices

My 2017 TRD Sport Is Showing Check Eng Light And The Cruise Control Will No...

My 2017 TRD Sport is showing Check eng light and the Cruise Control will not go on also Trac Off light stays on till I get up to 40MPH , Can anyone tell me what it may be and the fix ?

449 views with 5 answers (last answer about a year ago)

what is the oil capacity for a 2017 toyota tacoma with a 2.7L engine