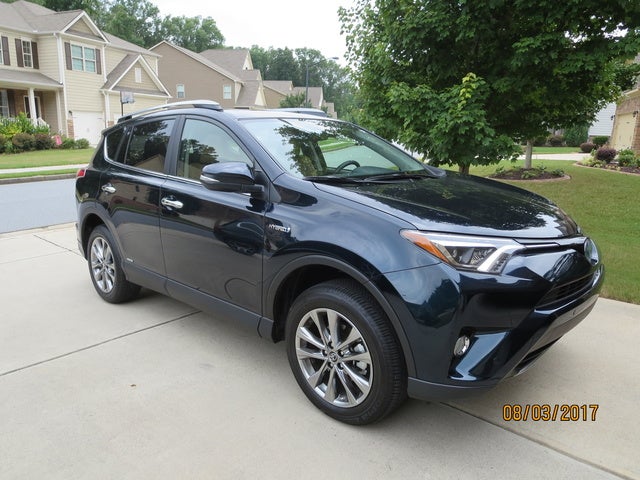 Average user score
4 ⁄ 5 stars
Based on 6 reviews
Review by GuruMV7DP — Love this car. Just wish it had a CD player. Read more
Review by Janeplus — It did have a nice smooth ride, but didn’t buy the one that I took for a test drive because the backseat doesn’t fold down flat. The battery pack because of the hybrid model created a bump under the ... Read more

If you're looking for a small crossover with great fuel economy, the Toyota RAV4 Hybrid could be just your ride. Coming back for its second year, the 2017 RAV4 Hybrid looks set to continue impressing and will add a new base trim, making the car more affordable.

Long one of Toyota's most popular cars, the RAV4 made a name for itself as a small crossover with a large amount of cargo room. While the conventional RAV4's small stature made it quite fuel efficient to begin with, Toyota decided to offer a more environmentally friendly version of the car and last year rolled out the first RAV4 Hybrid. The RAV4 Hybrid does offer slightly less cargo room than its non-hybrid sibling (35.6 cubic feet behind the rear seats and 70.6 with the seats down, compared to 38.4 and 73.4, respectively), but its fuel-economy numbers are significantly better than those of the non-hybrid version. Hop in a new RAV4 and you can expect to see mileage figures up to 24 mpg city/31 highway/26 combined—not too shabby for a 5-seat crossover. Hop in a new RAV4 Hybrid, however, and you can expect those numbers to climb to 34/31/33.

Under the hood of the RAV4 Hybrid you'll find a 2.4-liter 4-cylinder hybrid engine pumping out 194 hp. Thanks to the RAV4 Hybrid's standard all-wheel-drive system, that power will go to all four wheels via a continuously variable transmission (CVT).

Toyota has also slotted a new base trim into the lineup: the LE Plus. Sitting just below the XLE, the LE Plus should come with many of the niceties found on the non-Hybrid LE, with a few additions. This means you can expect a backup camera, Toyota's Entune infotainment system with connected navigation, SiriusXM satellite radio, remote keyless entry, 8 airbags, 4-wheel antilock brakes, traction control, and electronic stability control. For an extra fee, you should also be able to add an upgraded Entune system with integrated navigation. The LE Plus should also come with three driving modes—ECO, Sport, and EV. These will allow you to adjust the car's driving feel and fuel consumption.

Step up to the XLE and you can expect everything on the LE Plus, along with a power moonroof, dual-zone automatic climate control, 17-inch alloy wheels, a power liftgate, and a smart key, which allows you to open doors and start the car with just one touch. Those who want a little more safety tech can also add the Convenience Package, which gives the XLE blind-spot monitoring, rear cross-traffic alert, front and rear parking sonar, the upgraded Entune system with integrated navigation, and Toyota Safety Sense, which boasts pedestrian detection, lane-departure alert, automatic high beams, radar cruise control, and pre-collision preparation.

Want even more? Consider the range-topping Limited, which adds 18-inch SuperChrome alloy wheels, LED headlights, SofTex seats, upgraded Entune with integrated navigation, a power driver's seat with memory, a smart key, and Toyota Safety Sense. If that's not enough for you, you can also add the Advanced Technology Package, which includes a 360-degree camera and a premium JBL sound system.

All in all, the Toyota RAV4 Hybrid is a great choice for those looking for a small crossover that can do it all and still return excellent fuel-economy numbers. With its large rear cargo space and seating for 5, there's plenty of room in the RAV4 Hybrid for you, 4 friends, and all your gear—and with Toyota's impressive hybrid system, you won't use all that much fuel getting wherever it is you want to go.

Guru9FWHQ Own the Rav4 Hybrid, 6.7 litres/100 Km just suits me fine. However the rear seats do not fold down flat enough.

bubbleboyx Bought a 2017 Limited Hybrid back in December. The CRV was a strong consideration and I must admit to some buyers remorse for a period of time. However, over the 7 months of ownership, I have come to love the RAV Hybrid. I'm averaging 37 MPG. I don't do a lot of highway driving. Since I'm not a boy-racer anymore, most of the critic's negative comments (mostly about handling) aren't really relevant to me. The car handles fine, the ride is quiet and comfortable .. I don't know what else you could ask for.

Users ranked 2017 Toyota RAV4 Hybrid against other cars which they drove/owned. Each ranking was based on 9 categories. Here is the summary of top rankings.

Have you driven a 2017 Toyota RAV4 Hybrid?
Rank This Car

How Do You Remove The Rear Seat

How do I remove the rear seat?

Hi , This is my buying 2 nd car through the Cargurus ; but the experience with the first car was great ( with the autobargain of wayzata in MN ) but with the latest buy from RACINE HYUNDAI was very...

I have been searching for cars on your web site do you keep a running history of the cars I looked at?