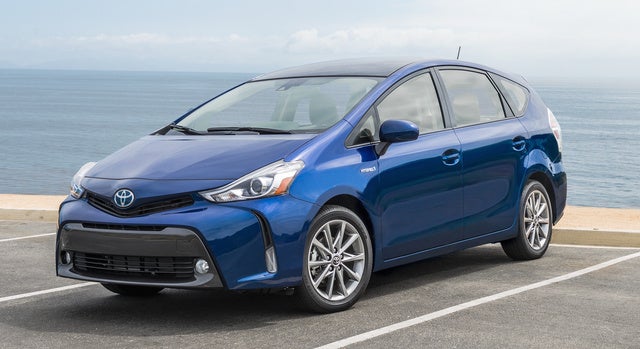 Toyota’s Prius lineup has quickly become a household name, but many buyers may be unaware that there are actually multiple flavors of Prii available at their Toyota dealership. Skewed more toward practicality than styling, you have the Prius v.

Based on the now-last-generation Prius “liftback,” the mainstream hatchback version of the Prius, the v has a roomier cargo area and higher roof that straddle the line between car and crossover. But even though it may cut more of a crossover shadow, the Prius v is decidedly car-like, since it doesn’t offer all-wheel drive, a third row of seats, or a meaningfully higher seating position. Instead, there’s more room inside—at the expense of fuel economy.

The Prius v is has more than 97 cubic feet of interior volume, however, or 34.3 cubic feet with the second row left upright. That's just five cubes behind Toyota's own RAV4.

Just one engine is available, a hybrid powertrain that combines a 4-cylinder gas engine with an electric assist motor powered by a nickel-metal hydride battery rather than the lithium-ion units seen in fresher designs. Like other Prii, the Prius v can scoot along using solely electric power at low speeds, during deceleration, or under low-load situations such as simply keeping pace with suburban or urban traffic. When more power is needed, the gas engine silently kicks on to provide some added oomph.

Combined, the two engines are rated at 134 net hp, not exactly a substantial figure for a vehicle that tips the scales at 3,340 pounds. As a result, acceleration is leisurely at best: 0-60 mph takes over 10 seconds, making this one of the slowest new cars money can buy. But speed isn’t the goal with the Prius v. Fuel economy is, and to that end, the Prius v is rated at 44 mpg city/40 highway/42 combined.

That’s a bit lower than the standard Prius, but it isn’t much of a surprise given the v is slightly less aerodynamic due to its different proportions. With low-rolling-resistance tires and a suspension tuned more for soaking up pot holes than carving corners, the Prius v isn’t even remotely sporty to drive. Those looking for a little more scoot or a little more handling prowess might want to check out the redesigned-for-2017 Prius. Whether or not Toyota will again create a larger version is up for some speculation.

That said, a host of Prius v trim levels are on offer, beginning with the confusingly named Prius v Two. That value-oriented trim comes nicely equipped, with automatic climate control, cruise control, a backup camera, and power windows and locks. Stepping up to the Prius Three brings a proximity key system, power lumbar support, automatic headlights, a touchscreen audio system, and a few cosmetic goodies. The Prius Four and Five top the line with luxuries like SofTex synthetic leather on the seats, a power driver’s seat, and a navigation system. The Five stands apart from the Four thanks only to its LED headlamps and 17-inch (versus 16-inch) alloy wheels.

All Prius v trim levels come identically equipped with the expected array of safety equipment: 7 airbags, including a knee airbag for the driver, stability control, and anti-lock brakes. Toyota restricts a full safety suite with adaptive cruise control, lane-departure alert, automatic high beams, and a system that primes the brakes (but does not apply them) in the event of an impending collision to the Advanced Technology Package, which is optional only on the Prius v Five.

Users ranked 2017 Toyota Prius v against other cars which they drove/owned. Each ranking was based on 9 categories. Here is the summary of top rankings.

Have you driven a 2017 Toyota Prius v?
Rank This Car