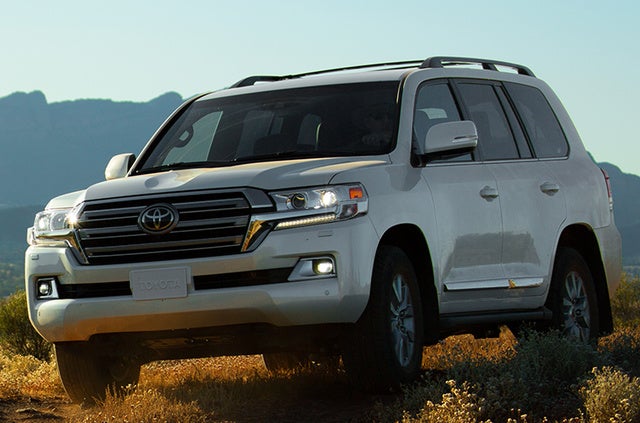 Like the Jeep Wrangler, the Toyota Land Cruiser is one of the few SUVs with a reputation for being able to reliably tackle any terrain. First introduced in the early ‘50s, the Land Cruiser has morphed from a rough-and-tumble SUV into a luxury-oriented vehicle that can still handle whatever you throw at it. For 2016, Toyota made a series of improvements to the Land Cruiser that included a new transmission, updated safety features, and a revised interior, so the 2017 model will not see any notable changes.

With a starting price of $84,325, the 2017 Land Cruiser is the most expensive model in the Toyota showroom. Its exterior design can be summed up with one word: boxy. The front features a large grille, projector-beam LED headlights, and a reshaped bumper, while the rear has a split-opening tailgate and LED taillights. It gets 18-inch wheels with standard off-road tires.

The Land Cruiser’s interior is made up of leather upholstery and other high-quality materials, although some may be disappointed that it doesn’t feel as premium as the new Mercedes-Benz GLS-Class or the Cadillac Escalade. A revised dashboard provides a more convenient layout, a larger 9-inch touchscreen, and Toyota’s Entune infotainment system. The Land Cruiser seats 8 people across 3 rows, although the cramped third row is best reserved for small kids or simply folded to the vehicle’s sides for increased cargo room. Those sitting in the second row have their own set of climate controls, heated seats that slide fore and aft for more legroom, and a rear entertainment system with a pair of 11.6-inch displays. Compared to its competitors, the Land Cruiser’s cargo capacity is small at 16.1 cubic feet, but folding the third row leaves 43 cubic feet, and stowing the second row, too, brings total cargo space to 81.7 cubic feet.

The Land Cruiser is powered by a 5.7-liter V8 engine that produces 381 hp and 401 lb-ft of torque and is paired with an 8-speed automatic transmission. Fuel economy is slightly disappointing for the class‚ with EPA figures of 13 mpg city, 18 highway, and 15 combined, although maximum towing capacity stands at an impressive 8,100 pounds.

Along with a full-time 4-wheel-drive (4WD) system, the Land Cruiser has a 2-speed transfer case that varies power delivery depending on whether you’re driving on the expressway or tackling a rocky trail. Toyota’s Kinetic Dynamic Suspension System allows the stabilizer bars to decouple for better wheel travel. Other clever features include Multi-Terrain Select, which adapts throttle response, shift points, and brake control for off-road driving; Crawl Control, which acts as a low-speed cruise-control system for tackling difficult terrain; and the Multi-Terrain Monitor system, which provides a 360-degree view of the vehicle’s surroundings.

What's your take on the 2017 Toyota Land Cruiser?

Have you driven a 2017 Toyota Land Cruiser?
Rank This Car

What octane gas should you put in a 2017 landcruiser?