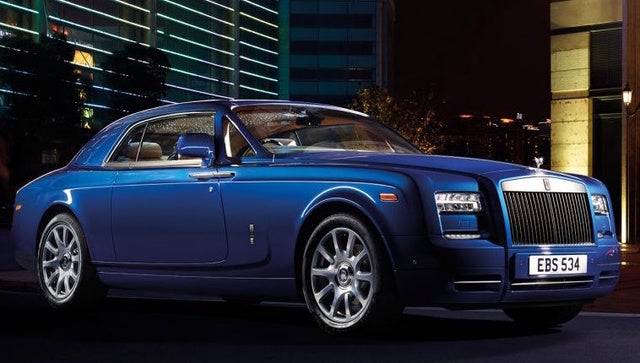 The Rolls-Royce Phantom Coupe reaches its zenith in 2017—literally—with a final, special-edition run named the Phantom Zenith Collection. This year marks the tail end of its seventh generation, and early production versions of an all-new, eighth-generation Phantom have already been spotted on the roadways of Great Britain, though heavily disguised. When the new Phantom finally gets unmasked, possibly sometime later in 2017 for the 2018 model year, it will do so as a sedan only. Rolls-Royce has announced that the Phantom Coupe and its convertible companion, the Phantom Drophead Coupe, will end their runs as the current generation closes out.

To ensure the 2-door Phantom Coupe goes out in style, the British automaker has spruced it up for a final big splash in 2017 as the Phantom Zenith Collection, equipped with a number of upscale features and unique upgrades. Rolls-Royce will limit production of Zenith editions of the Coupe and Drophead Coupe to 50 units each. When they come off the assembly line at the automaker's production facility in Goodwood, England, they'll be the last vehicles of their generation, and likely the last of their kind for a while.

In upgrading the Phantom Coupe for its final year, Rolls-Royce aimed for perfection—and it’s hard to dispute their success in achieving that goal. The Phantom has always been a vehicle in its own class, and it gets even more rarefied with the Zenith Collection. The upgrades start right at the front, with a unique Spirit of Ecstasy hood ornament, and end at the rear, where the automaker has equipped the trunk, or boot, with a fold-out picnic setup complete with an illuminated glass shelf, a champagne holder, a cooling box, and a 2-person leather seat. The addition of the Picnic Hamper, as Rolls-Royce calls it, gives the automaker an opportunity to spotlight its Bespoke division, which is devoted to creating customized vehicle editions and add-ons. Designers hand-craft the Picnic Hampers to fit each Phantom Coupe, matching the color to the vehicle’s interior and using materials like natural-grain leather and American Walnut trim. Artisan tableware and an engraved plaque are also included.

The Phantom Coupe’s interior gets an upgrade as well, with a Starlight headliner, which mimics a star-filled sky, and three new color schemes inspired by Rolls-Royces of the past. The original 1925 Phantom provides inspiration for a navy and white interior, while a red and black theme commemorates the 1929 Phantom II. The automaker also offers a more subtle seashell and gray palette drawn from the 1911 Silver Ghost. Other highlights of the Phantom Coupe's Zenith edition include customized instrument gauges, laser-etched armrests, and a presentation box in the center console, called a Z Box, which contains an actual piece of the Phantom's assembly-line rail—polished, finished in black enamel, and specially engraved with the serial number and coordinates of the car's production site.

Other than the Zenith upgrades, the hand-built Phantom Coupe rolls over into the new year with all the features that have made it one of the world's most desirable vehicles—starting with the iconic single-piece Pantheon grille framed by rectangular LED headlights. The long nose and hood, with their conservatively sculpted lines, provide a definite statement and establish the Coupe's lineage and dominance on the road. Visible exhaust pipes at the rear and massive 21-inch wheels distinguish the Coupe from the Sedan, which has hidden exhaust pipes and sits about 2 inches higher, and give it a sportier, more aerodynamic ride. Two rear-hinged, power-operated doors further establish the Coupe's uniqueness.

Power for the rear-wheel-drive (RWD) Phantom Coupe continues to come from a hand-built naturally aspirated 6.7-liter V12 engine, which pumps out 453 hp and 531 lb-ft of torque. The engine mates to a specially tuned 8-speed automatic transmission and drives the Coupe from 0-to-60 in a respectable 5.6 seconds. Fuel-economy numbers remain relatively skimpy at 11 mpg city, 19 highway, and 14 combined.

On the Phantom Coupe’s interior, standard features include hand-stitched leather upholstery and wood trim. Both rows of seats are heated, with embossed headrests and a 10-way power-adjustable driver's seat. Drivers can choose from three rear-seat configurations: a 3-passenger bench seat, 2 individual seats with a third central fold-down seat, or 2 individual seats with a fixed armrest and console in between. Beyond that, just about anything is possible, thanks to the plethora of available upgrades, customizations, and options.

Tech features center around the Phantom Coupe’s 8.8-inch touchscreen, which provides access to navigation, satellite radio, a 6-CD/DVD changer, and a premium 15-speaker Surround Sound system. Multi-zone climate control, a power tilt/telescopic steering wheel, and a surround-view camera system are among the other standard interior items.

The Phantom Coupe rides on a stiffer suspension than the Sedan, making for a sportier ride, and comes with sport-tuned brakes. Still, the Coupe emphasizes comfort, smoothness, and refined handling over any hard-charging, curve-hugging capabilities. The V12 does a good job of moving the 5,688-pound vehicle along at an acceptable pace, but some reviewers say its emphasis on refinement means the Coupe doesn't quite have the driving dynamics required to push it to the extreme. That's no doubt of little concern for those buyers lucky enough to get their hands on one of these exclusive vehicles, however, which are, in every way, the last of their kind.

What's your take on the 2017 Rolls-Royce Phantom Coupe?

Have you driven a 2017 Rolls-Royce Phantom Coupe?
Rank This Car