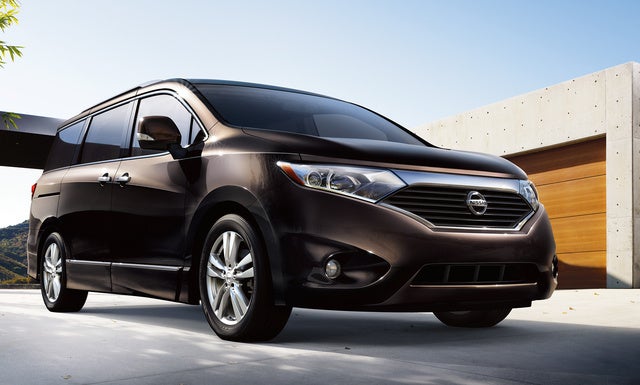 The Nissan Quest will be back for 2017 and should sport some new features. While the fourth generation of this popular minivan has been around since 2011, we don't expect to see a completely new Quest and anticipate Nissan will release an updated, slightly refreshed version of the 2016 later this year.

Under the hood, expect the 2017 Quest to be offered with the same 3.5-liter 260-hp 6-cylinder engine found in last year's model. That power will go to the front wheels via a continuously variable transmission and should return fuel-economy numbers of approximately 20 mpg city/27 highway/23 combined.

Nissan will continue to offer a Quest for everyone, ranging from the base S to the range-topping Platinum. In between sit the SV and SL, the SV being slightly more posh than the S, but not as much as the SL.

Take a look at an S and you'll find a well-equipped minivan designed to fit tighter budgets. For 2017, expect the S to come in around the $27,000 mark. While Nissan still has not released information on what equipment different Quest trims will be offered with, we expect the 2017 S to come with much of the same equipment found on the 2016. This means you can expect push-button start, a permanent rear storage well, power mirrors, flat-folding second- and third-row seats, and dual sliding rear doors.

If the SV isn't enough for you, step up to the SL and you'll get leather seats, a power liftgate, heated front seats, 18-inch alloy wheels, an auto-dimming rear-view mirror, and automatic headlights standard. If you want even more, you can, for a fee, add the DVD Entertainment System Package, a 13-speaker Bose sound system, and dual opening glass moonroofs.

Those who really want to be pampered (and can shell out over $43,000 for the privilege) can opt for the Premium, which adds navigation with an 8-inch color display, a 360-degree camera, blind-spot warning, the DVD Entertainment System Package, and xenon headlights. If you want just a little more, you can also add the dual opening glass moonroofs.

All in all, the Quest is an able people hauler with a range of trims to fit all budgets. While there are a few tweaks we hope to see Nissan make this year, if you're looking for a comfortable minivan that can fit an adequate amount of gear, the Quest could be for you.

Sean The main benefits of the Quest are the permanent rear storage well and the fact that, despite the decreased overall room, you don't have to take out any of the seats to get a flat, stable load floor. And the less complex third row seat means that you get some of the best third row legroom in the segment, second only to the ridiculously long Honda Odyssey. I don't know if you've noticed, but the people who drive Quests generally appear to be about a decade older than drivers of other minivans. This is because of the ridiculously heavy center seats that can't be moved by an older parent with a bad back, and can barely be moved by someone without one, but have to be if you want a flat load floor on most other minivans. All of the neat sliding tricks of the second row seats also wouldn't be possible if the third row seat folded below the floor. If they go through with making the cargo area of the Quest more like that of the Sienna, I think they'll see their already niche market evaporate, and Nissan marketing likely knows that. They might increase cargo room by making all 3 rows level instead of the theater seating layout they currently have, but I just don't see them doing anything as drastic as what you're suggesting.

Guru91KP6 I have been waiting on one for one year n nissan has giving me the run around won't give an answer too if they are going to release it they want ppl to buy up the inventory the only problem with that, is there is none !

Kerry this review is deceiving, because the numbers don't tell the truth in real world usage. although the Oddyssey and Sienna have more cubic feet of capacity the quest actually works better in real world usage for a number of reasons. 1.) its shape: the shape of the quests has two benefits. you can load cargo up from floor to ceiling without losing width. in other minivans the roof tapers in which causes a loss in storage as you begin stacking. the other benefit is that although minivans like the odyssey may beat it in 3rd row leg room, the quest will give passengers better overall comfort due to the greater headroom (because the roof doesn't taper in) and the theater. style seating. the latter gives the 3rd row a much more airy and less claustrophobic feel 2.) its height: the height of the quest give you more headroom inside the vehicle and more ease in filling it up with stuff. 3.) it's seats: the seats don't need to be removed or stowed away to get a flat cargo area. for owners who aren't strong enough or may have back problems this makes ease of use a major advantage. Also, even after you've folded the 3rd row seats, you still retain the cargo well for extra storage. 4.) size: minivans like the honda odyssey are not mini. in order to get the extra cubic feet of space the odyssey has become a seriously long vehicle and you feel it when behind the wheel. the turning radius, smoothness and ease of parking are all strengths of the quest. 5.) interior quality: the quest by far has the nicest interior of any minivan. other minivans of its timer were riddled with hard plastics and rattling interior pieces. yes this includes the odyssey and sienna. I only know the above because of extensive research when i was looking for a van. most publications do not cover real world usage and just go by the spec sheet which does not tell you the whole truth. so in the end while the quest is indeed smaller inside than some vans, it tends to have more usable and easy to use cargo space overall. what i do fault it for is the fact that they could have easily made this an 8 passenger vehicle but they chose not to. this coupled with public perception of space based on publications, and polarizing styling (i personally think it's one of the best looking minivans) is probably why it didn't sell well.

Have you driven a 2017 Nissan Quest?
Rank This Car

My 2017 Nissan Quest has an O/D overdrive on the stick shift.. It is always on, the van runs fine.. or so it would seem, but when you take the overdrive off, a light comes on telling you its off, an...