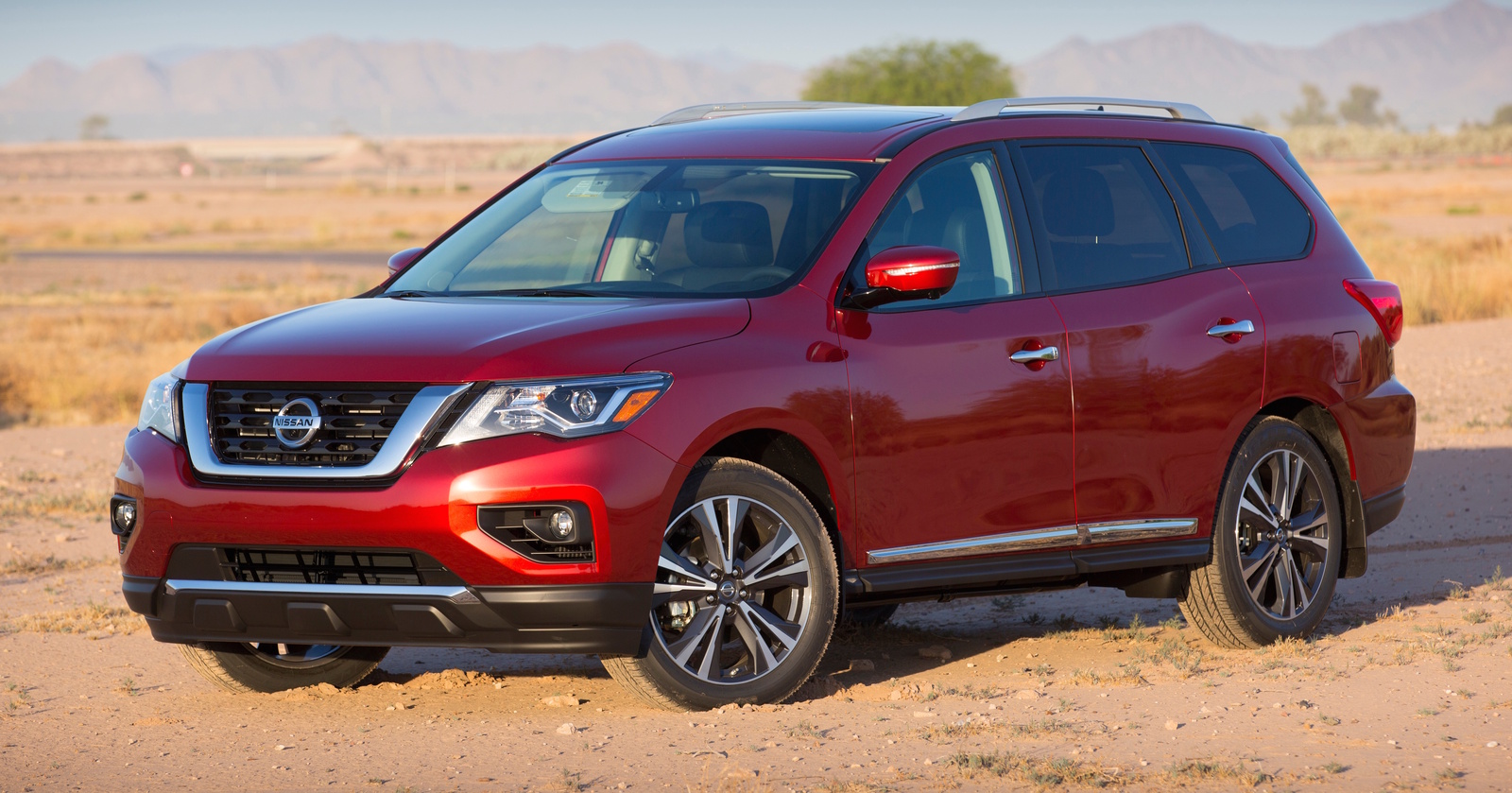 There was a time when SUVs like the Ford Explorer and Nissan Pathfinder were truck-based machines. They got through EPA loopholes for fuel economy and provided families added space as well as a 4-wheel-drive power train that could handle a variety of road and driving conditions.

The Explorer, Pathfinder, and others have moved to car-based platforms, and that’s not necessarily a bad thing. The new Pathfinder isn’t as rugged as it was in the past, but it can do everything that’s asked of a family hauler.

The Pathfinder is in its fourth generation after debuting in 1985 as a 2-door SUV that was very nearly a pickup with a hardtop. The first-gen eventually picked up a second set of doors, but never added more interior comfort. A second-generation model was introduced in 1995 as a far more refined vehicle, with 4 full doors. The third-generation model was introduced for the 2005 model year and was as rugged as it was comfortable, sharing a platform with the Frontier pickup truck.

In 2013, the Pathfinder got completely redesigned, using a platform shared with the Altima, Quest, Maxima, and others. That allowed Nissan to maximize the space provided by the platform, making for tons of cargo and passenger room. 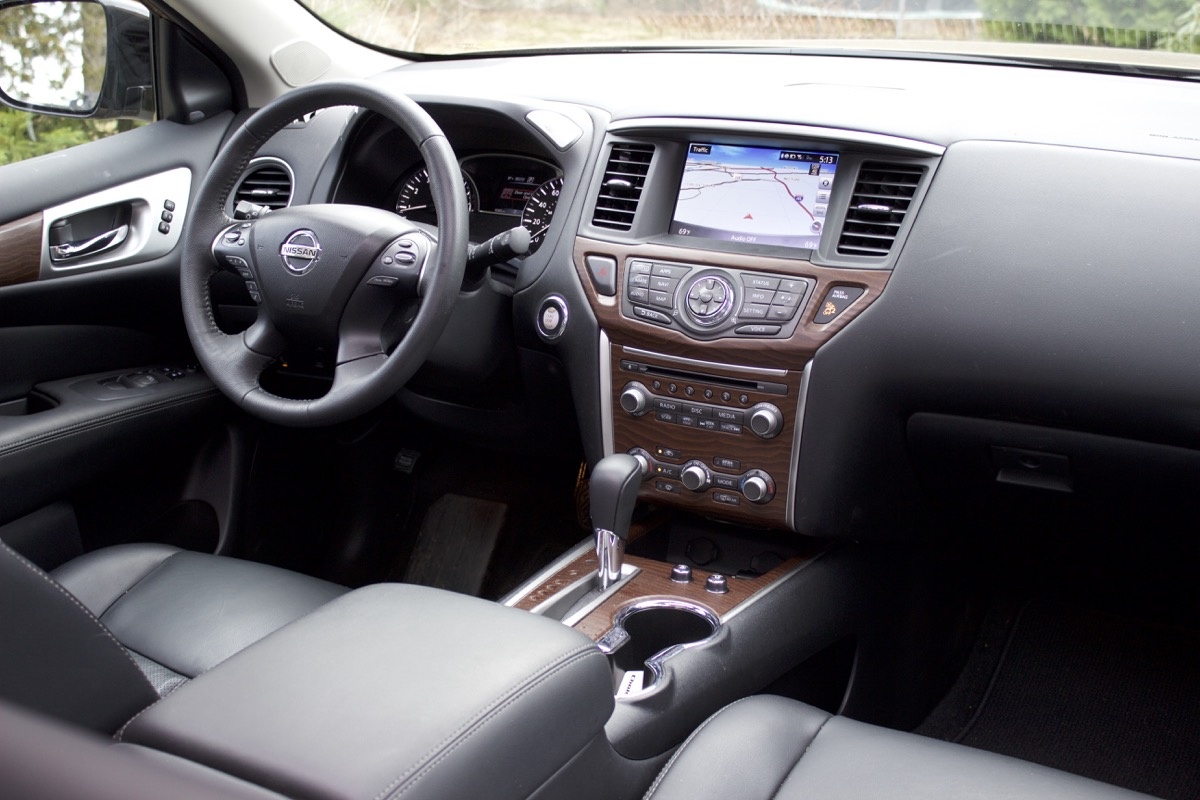 For 2017, Nissan has updated the Pathfinder again. The new vehicle tightens up the headlight design and adds a more aggressive grille, all of which falls in line with the look introduced by the eighth-generation Nissan Maxima, which arrived for the 2016 model year. The new look also features redesigned taillights, which are not very noticeable, but look sharp nonetheless.

Inside, things look very much the same as the 2016 model. One of the only changes is this added space between the cupholders. And it’s fine that little has changed here, because the Pathfinder has a great interior layout.

While automakers have been pushing form over function for cabin controls, Nissan doesn’t try to push any styling boundaries on the Pathfinder’s controls. They feature a traditional layout, with a familiar position for dials for the climate and audio controls. Above them is the 8-inch touchscreen that’s standard across all trims. In its base form, it operates the radio and other basic functions, but it can be outfitted with Navigation in more expensive versions. 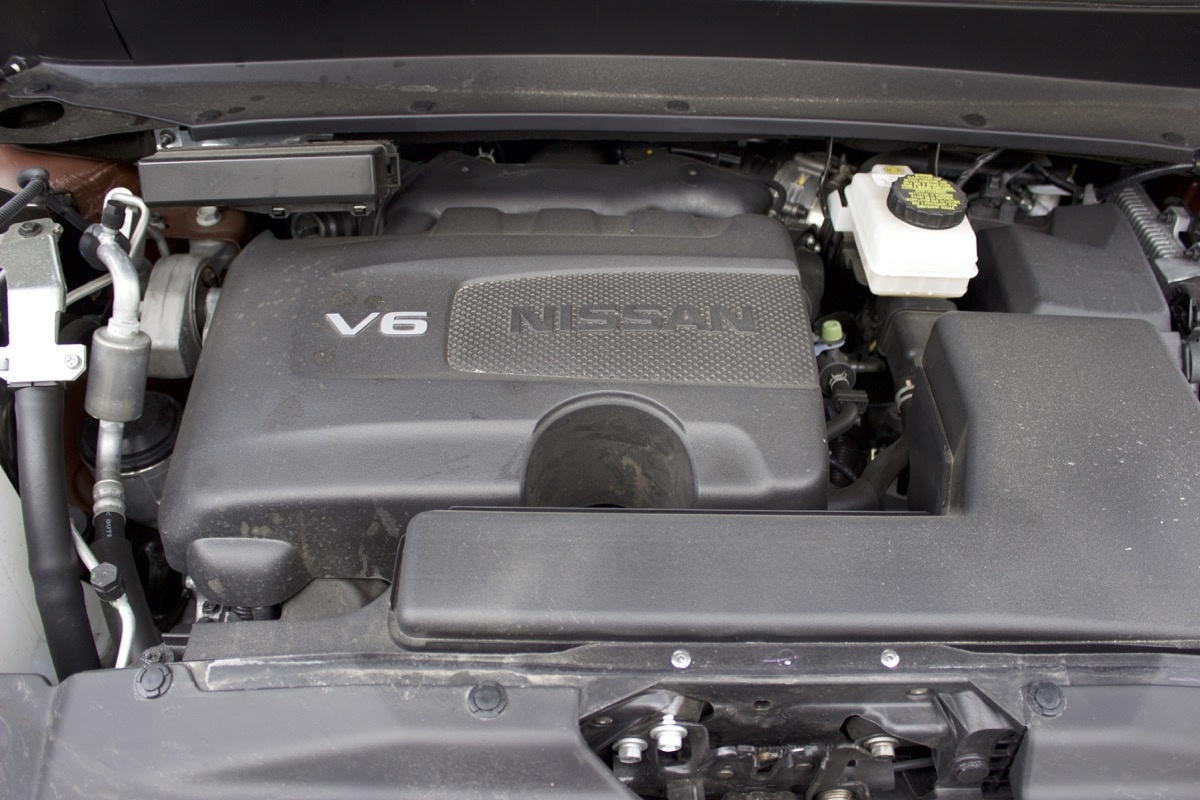 The Pathfinder gets a 3.5-liter V6, which has been updated for 2017. It should be noted that some SUVs in the class, such as the Toyota Highlander, come with an inline 4-cylinder (I4) as the base engine. But unless you’re talking about a turbocharged 4-cylinder, like the one powering the new Mazda CX-9, an I4 will be underwhelming for a vehicle this size—the V6 is close to necessary.

The updated 3.5-liter V6 makes 284 horsepower—up from 260. This is a noticeable bump in power, and not just on paper. Lay your foot into the accelerator, and the V6 provides some serious acceleration. Whether it's pulling away from a stop light, getting up to highway speeds, or even making a pass at highway speeds, that added power is noticeable, and it also means a larger 6,000-pound towing capacity. It’s not quite the 7,400-pound capacity of a V8 Durango, but it’s a thousand pounds more than the Pilot and the Highlander can manage.

Power gets sent through a continuously variable transmission (CVT) to the front wheels or available all-wheel drive, as found on our test car. Nissan calls it 4x4-i, but it isn’t the transfer-case/low-range setup you might find in a truck—it’s a full-time 4-wheel-drive (4WD) system that’s really an all-wheel-drive (AWD) setup, but it does have a dial that allows the driver to select a drive mode.

One can switch the Pathfinder into 2-wheel drive for better fuel economy, leave it in Auto, or lock it into 4WD for getting off the beaten path. It also has also hill-start assist and a hill-descent-control button, which will maintain the Pathfinder’s speed using the brakes and throttle with your feet completely off the pedals, allowing you to focus on the trail.

How much use this system will receive is entirely up to you—maybe the head of the bike trail or the launching spot for your kayaks is down a remote road. If anything, leaving the system in Auto will ensure great traction when the weather gets rough.

As for driving the rest of the time, the Pathfinder isn’t that special. It’s not bad, per se, but its handling and cornering are vague. On the plus side, it has little body roll through corners, and most shoppers should find its ride relatively comfortable. 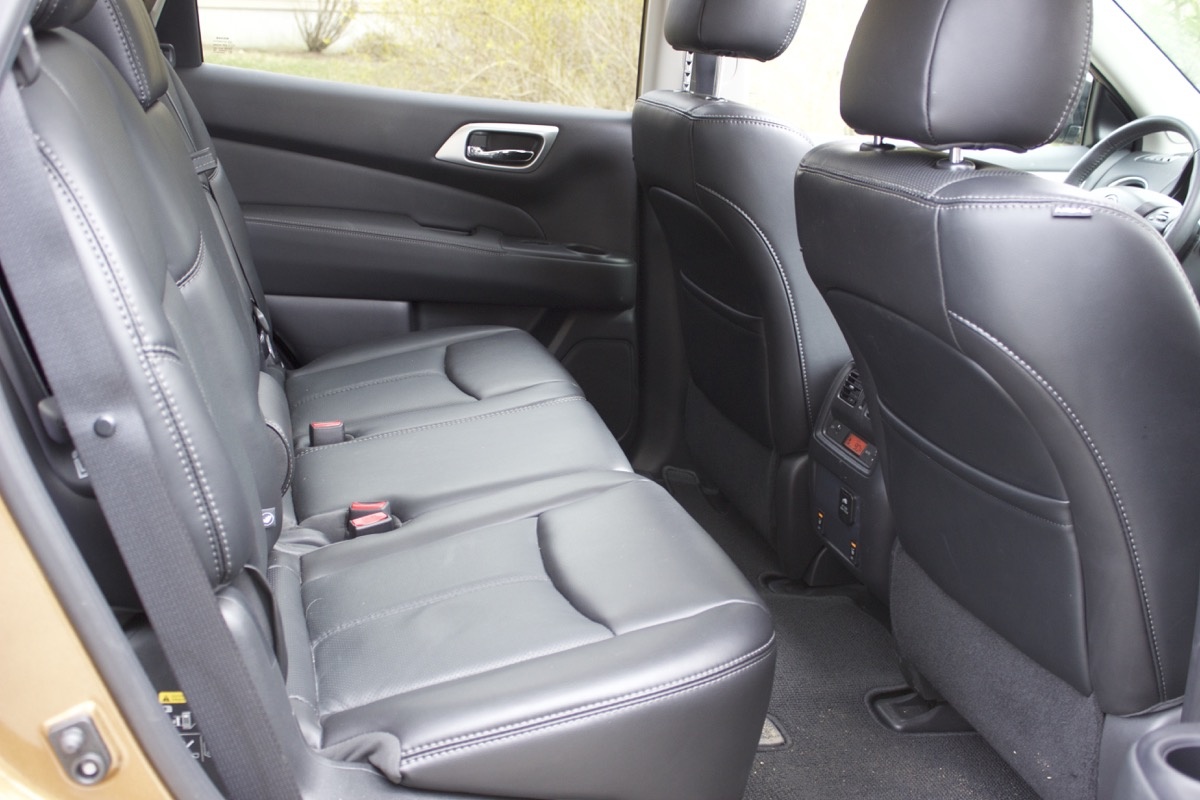 The Pathfinder provides 8 cup holders and 6 bottle holders, as well as plenty of cubbies and compartments for all your stuff. And no matter which trim you choose, you get 7-passenger seating with a middle bench and a 50/50-split third row. Drop the second and third rows and you get 79.8 cubic feet of cargo space. That’s less than the Toyota Highlander and Honda Pilot, but only slightly. If you like the Pathfinder, that marginal drop in cargo space won’t be a deal breaker.

The same cannot be said of all three rows of seating. Access to the third row is easy enough, though as third rows go, it’s middle of the pack. The Highlander has a more cramped third row, and the Honda Pilot is one of the few vehicles in this class with a third row that fits adults. But if you’re mainly hauling kids around, that shouldn’t be a huge deal, either. 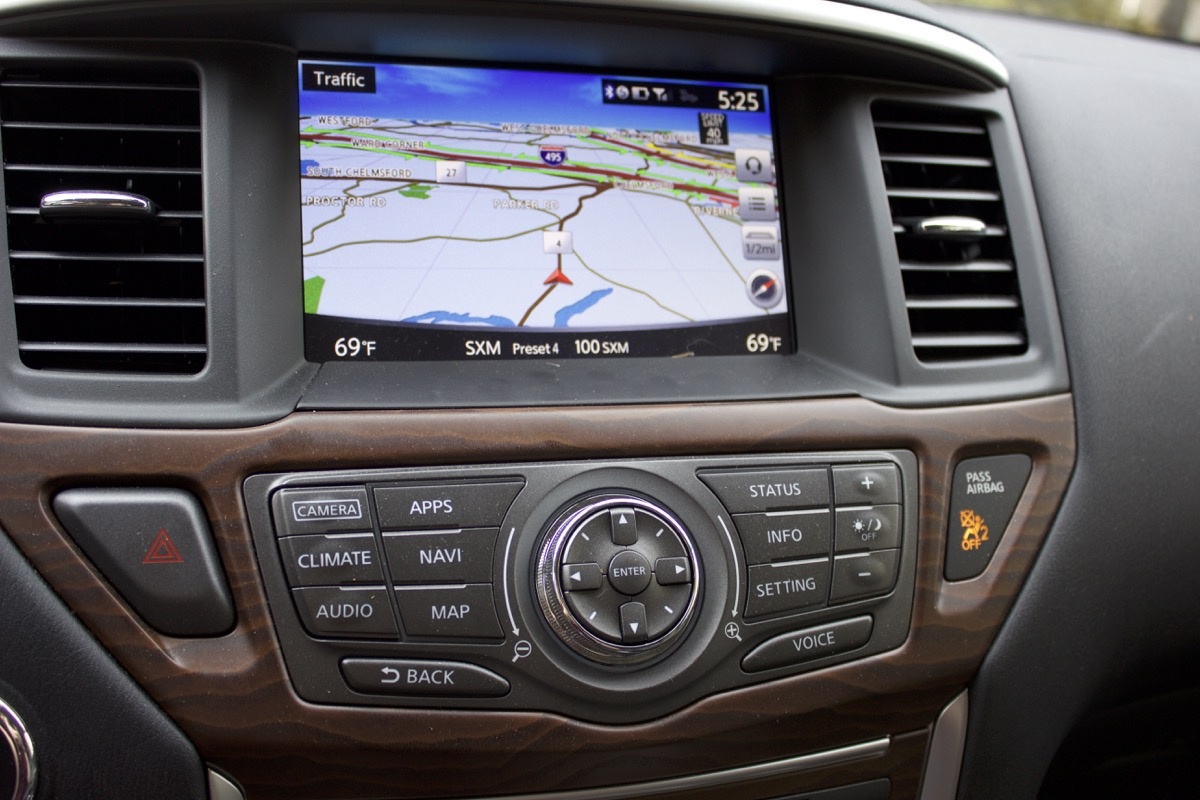 As stated already, the Pathfinder has an 8-inch touchscreen as standard equipment, and moving up to the Platinum trim adds navigation with real-time traffic and weather. One great thing about Nissan products is their redundant controls. You can use the touchscreen or the many buttons down below, including a large dial in the middle to zoom in and out of the map.

A tray for your smartphone displays the ambient light below the center stack. You can plug your phone into one of the pair of USB ports located on the center console. Pairing a smartphone for Bluetooth hands-free calling is easy enough, and you can click through to your phone’s music simply by pressing Media. It is a straightforward layout, though it lacks Apple CarPlay and Android Auto. They might be available in the future, but not on the 2017 model. That’s more than we can say for the Toyota Highlander, which has no plans to get those systems. 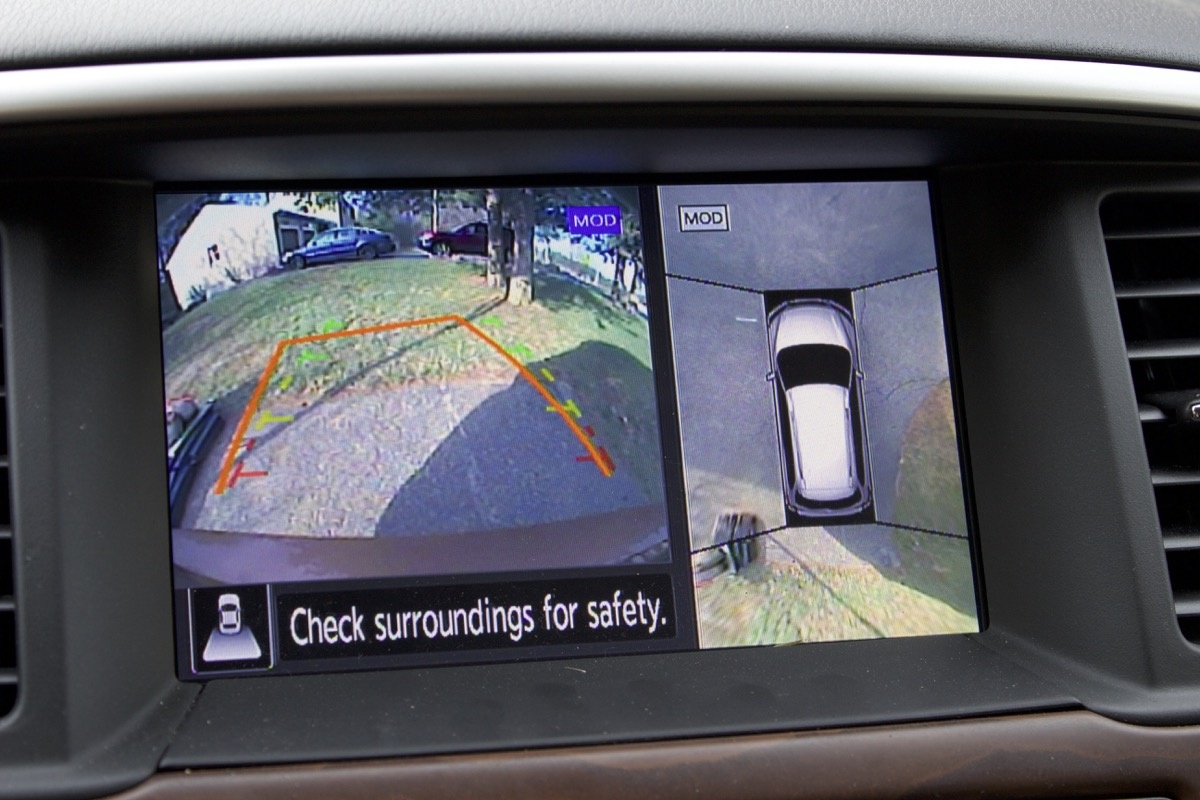 The Pathfinder comes standard with a full array of front and side impact airbags, Vehicle Dynamics Control with traction control, front and rear crumple zones, and the LATCH child-seat anchoring system. The Pathfinder also comes standard with a tire pressure monitoring system and Easy-Fill Tire Alert. When you fill the tires with air, the car automatically honks the horn when you’ve reached the ideal tire pressure. This is a great system to keep tire pressures normal, as most folks don’t typically carry a tire-pressure gauge.

A crossover like this often has to carry plenty of kids and their gear, and the Pathfinder delivers peace of mind via its strong safety scores. It earns 5 stars in National Highway Traffic Safety Administration (NHTSA) crash testing, and it’s a Top Safety Pick from the Insurance Institute for Highway Safety (IIHS). Optional safety tech, like forward-collision warning, blind-spot warning, and rear cross-traffic alert are also considered Superior by the IIHS. 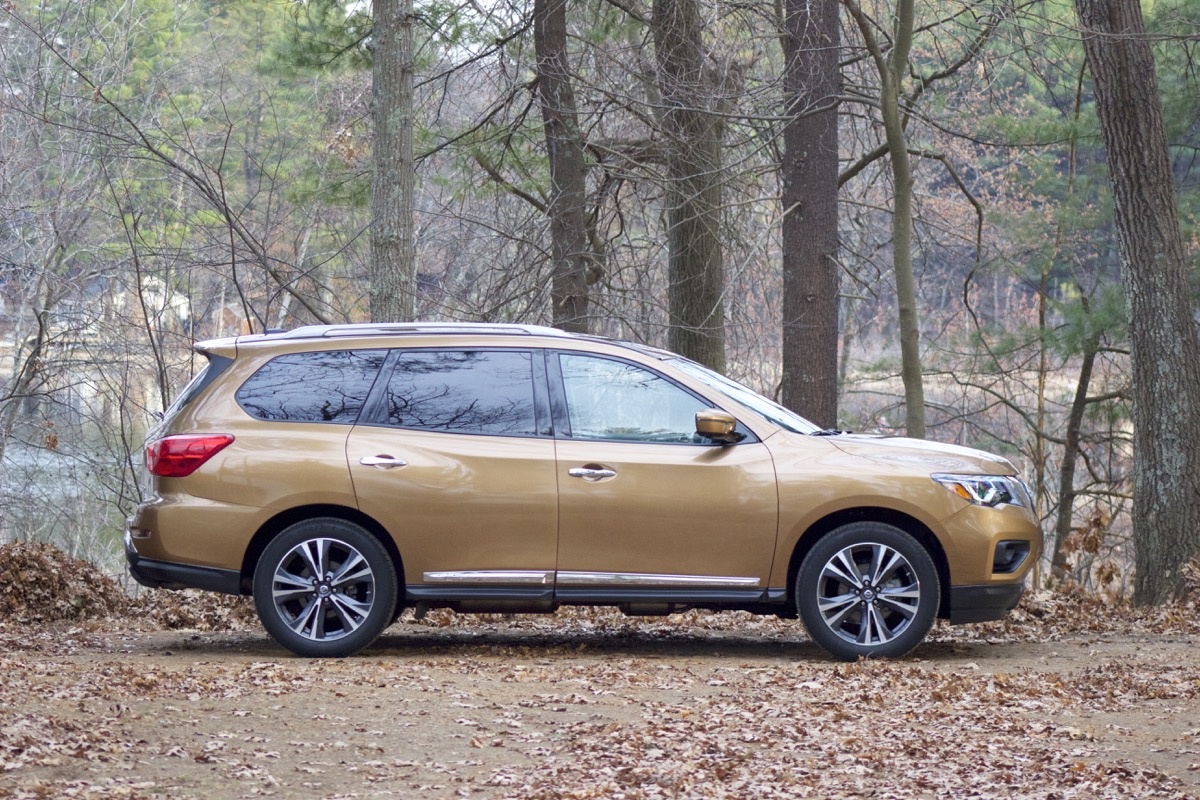 The Nissan Pathfinder comes with a 3-year, 36,000-mile basic warranty and a 5-year, 60,000-mile powertrain warranty. These figures are in line with its biggest competitors, the Honda Pilot and Toyota Highlander.

The Pathfinder breaks with the Pilot and Highlander to offer a compelling third option in this group of family-hauler SUVs. It doesn’t excel at any one thing, but instead is a very well-rounded vehicle. I have no problem calling the Pathfinder a smart choice as an all-around family-friendly vehicle.

What's your take on the 2017 Nissan Pathfinder?

TheHorror Nissan: You may be a credit criminal, but still demand a Japanese car!

Have you driven a 2017 Nissan Pathfinder?
Rank This Car

Is There A Lemon Law Or Other General Protection I Have As A Buyer?

I bought a used car from a dealer in central Virginia. The engine seized up in 33 days.

why is my car still say processing and doesn't show for sale and we paid for the listing $ 24.95

How Can I Tow My 2017 Nissan Pathfinder FWD Behind A Motorhome?

I have a 2017 Nissan Pathfinder SV. I need some clarification on how it can it be towed on a tow dolly.

Can I Get The Pricing Ad?

There was a 2017 red color Nissan Pathfinder in Warner Robins at five star could you email that ad back in March around the 10th . My email is ieacha86@gmail.com

Will Putting Those Huge Eyelashes On My Car Damage It In Any Way?

I live in Vancouver, so not super extreme temperatures and they would only be on for less than a month.