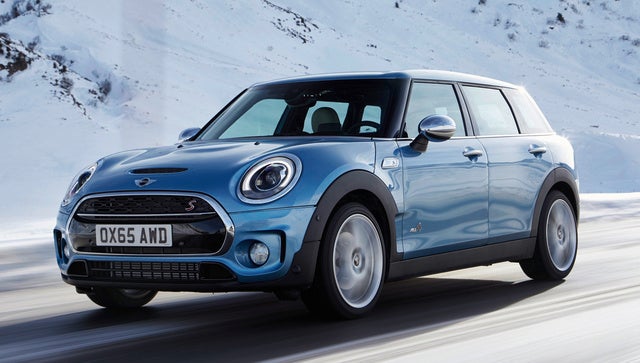 While still called "MINIs," the cars bearing that nameplate actually seem to be getting bigger with each new model. This trend started with the Clubman, which first saw the light of day in 2007 and was available for the 2008 model year. After the new MINI had been out for a while, parent company BMW had to keep the brand fresh by introducing new versions of the MINI, such as a convertible. But while the convertible was little more than a soft-top version of the MINI hatchback, the Clubman was a longer, more practical car. Identical to the normal MINI from the B-pillar forward, the Clubman had a longer tail, with rear barn doors instead of a hatch (an homage to the Traveller and Countryman versions of the old MINI) and a suicide door on the right side of the vehicle for rear passengers.

The new MINI Clubman is considerably different from the first generation, with a slightly longer footprint and a more traditionally wagon-like silhouette. It is both the longest and widest version of the MINI, and forgoes the single suicide door (which was controversial in right-hand-drive markets because it opened towards the road) in favor of four regular doors. The distinctive and useful rear barn doors, however, are retained. Optional extras include adaptive LED headlights, LED foglights, and a panoramic sunroof. The big news for the 2017 Clubman, though, is the availability of All4 all-wheel drive (AWD).

Engines for the 2017 MINI Cooper Clubman include the familiar 1.5-liter 3-cylinder or the 2.0-liter 4-cylinder from the Cooper S. The base 3-cylinder makes 134 hp and 162 lb-ft of torque. The Cooper S offers considerably more performance, with 189 hp and 206 lb-ft of torque, enough to get the relatively large car from 0 to 60 mph in the mid-6-second range and on to a top speed of 140 mph. The Cooper is available with either a 6-speed manual or an automatic transmission, while the Cooper S can be had with either a 6-speed manual or an 8-speed Steptronic transmission with paddle shifters. An even speedier John Cooper Works version will likely arrive later, but for now, the base Cooper and performance-oriented Cooper S are the only versions of the Clubman available.

The new Clubman's suspension was revised for added stiffness, and both a sport suspension and Dynamic Damper Control come optional. Despite its larger size, a more extensive use of aluminum means the new Clubman isn’t any heavier than the previous generation, and the AWD system adds just 134 pounds. It's worth noting the All4 system used to be available only on the MINI Countryman and the similar Paceman, before moving to the new Clubman. Under normal road conditions, the front wheels still get 100% of the torque, but power can be sent to the rear wheels if any slip is detected. Combined with its bigger profile, this extra road-holding makes the Clubman more appealing to a wider range of buyers, including those living in colder climates or near rougher roads. MINI also claims the AWD system improves high-speed handling.

The 2017 Clubman might be a larger car than you’d expect from a company called MINI, but that means it’s more roomy inside as well (with capacity for 5 passengers). The luggage compartment has 17.5 cubic feet of cargo space that is expandable to almost 48, and the larger doors make entering and exiting easier. An optional head-up display features info like navigation, and new interior options include “atmospheric lighting”, electrically adjustable seats, chrome trim, and different upholstery combinations.

The MINI Cooper Clubman comes standard with eight airbags, run-flat tires, traction and stability control and ABS, and optional safety equipment includes a rear-view camera and parking sensors. While the first MINI Cooper Clubman was really an elongated version of the hatchback, this new version is more of a true 4-door wagon, and the newly available AWD broadens the car’s appeal even further. Growing its models' appeal is something MINI needs to continue to do in order to keep its brand relevant--even if the cars keep getting less and less, well, miniature.

What's your take on the 2017 MINI Cooper Clubman?

Have you driven a 2017 MINI Cooper Clubman?
Rank This Car

What Color Is Caribbean Aqua Metallic On A Mini Cooper Clubman

How To Install Trickle Charger On 2017 Mini