Kia keeps chipping away at the compact competition with a monster of a mid-cycle refresh for the Forte. 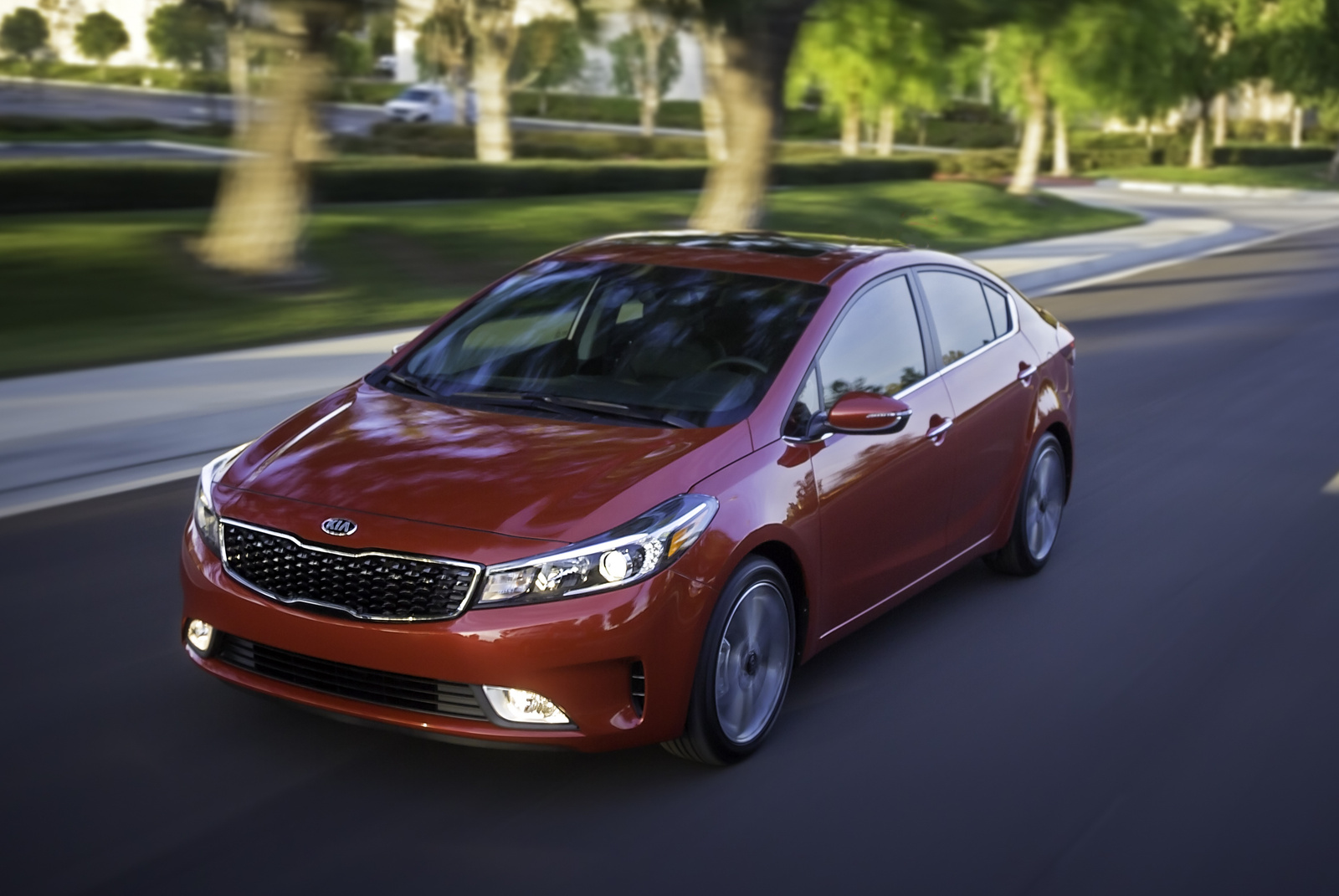 In the extremely competitive compact sedan segment, the Forte has to deal with the Civic, the Mazda3, the Jetta and the Focus, just to name a few. Because of this, staying relevant means near-constant updates and improvements. For 2017, Kia has taken the Forte and restyled the front end, tossed in some new lights front and back, added a more efficient 2.0-liter engine and a sport trim, and made more features standard throughout the trim lineup. 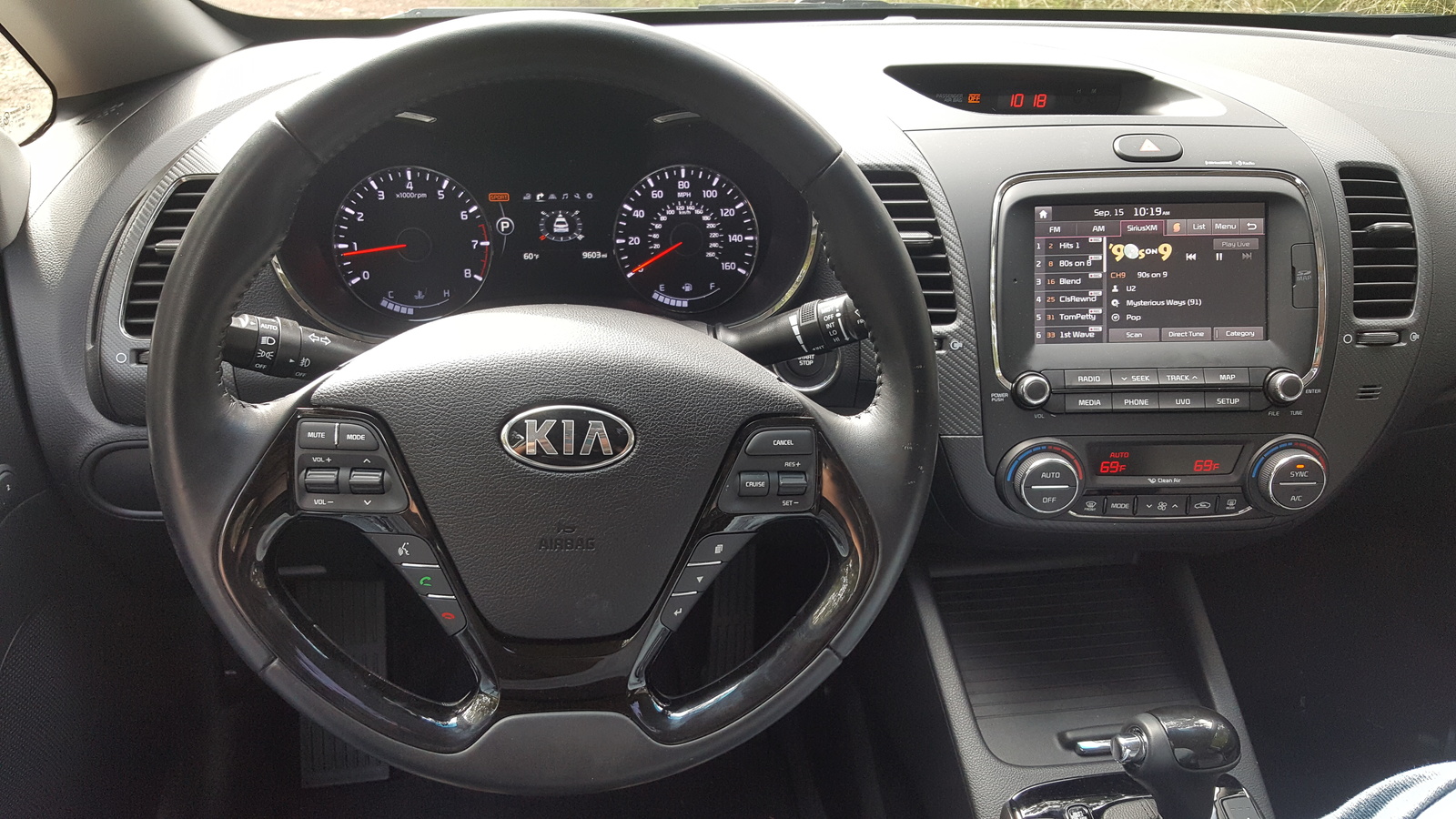 With a reworked front end and new lights front and rear, the Forte presents a fresh face for the compact sedan segment. With fog lights pushed inward to make room for new air inlets at the side and headlights that now connect fully with the grille, the effect is immediately evident up front, if not transformative.

A starting price of $16,600 for an LX presents a very attractive entry point, but this can be slightly deceiving. Features normally considered expected, like an automatic transmission, will run you another $1000, while cruise, auto headlights, a 4.3-inch touchscreen with reversing camera and more will tack on another $900 through the Popular Package. Popular indeed, and most would be shocked to purchase a new car in 2017 and find it doesn’t come with cruise or auto headlights. Thankfully, the $900 package also adds upgraded upholstery and trim, an upgraded stereo and center armrests front and back, making a better case for an MSRP that jumps to $19,690 with these options plus destination.

Of course, this is already surpassing the new S trim’s $19,300 starting price. Here you’ll get 16-inch alloy wheels, selectable drive modes, a sport suspension, unique trim and upholstery, and a 7-inch touchscreen with Apple CarPlay and Android Auto. That’s a great deal, though as we’ll discuss later, I’m not sure the sport suspension is what the Forte needs. A $1500 Technology Package piles on keyless entry and ignition with pushbutton start, rear LEDs, and LED turn signals integrated into the side mirrors, and most impressively, a suite of autonomous safety features including lane-departure warning and prevention, blind-spot monitoring with rear cross-traffic alert, and a forward-collision warning system with auto brake and pedestrian detection.

To further outfit your S trim, you can also add the S Premium Package for another $2500, giving you a power sunroof, heated front seats with 10-way power and a memory system for the driver, navigation, and alloy pedals. Check all that and you’re sitting at $24,185, well beyond the EX’s $21,300 MSRP. This is the trim Kia provided for my review, which gets the carryover 2.0-liter engine as opposed to the “new” Nu Hyundai engine that powers the rest of the Forte lineup. The EX drops the sport pretension of the S trim but carries over the rest of its features. Here, the final options are grouped into a single package—the EX Premium Plus Package—which for $4490 will bring along all the safety features mentioned, plus the sunroof, heated power seats with added ventilation, HID headlights with “Dynamic Bending Light” to follow around corners, an auto-dimming rear-view, and a color LCD meter cluster. Check every box and you’re at $26,980 including destination—fully outfitted but skirting the purchase price of some of the segment’s more expensive entrants. 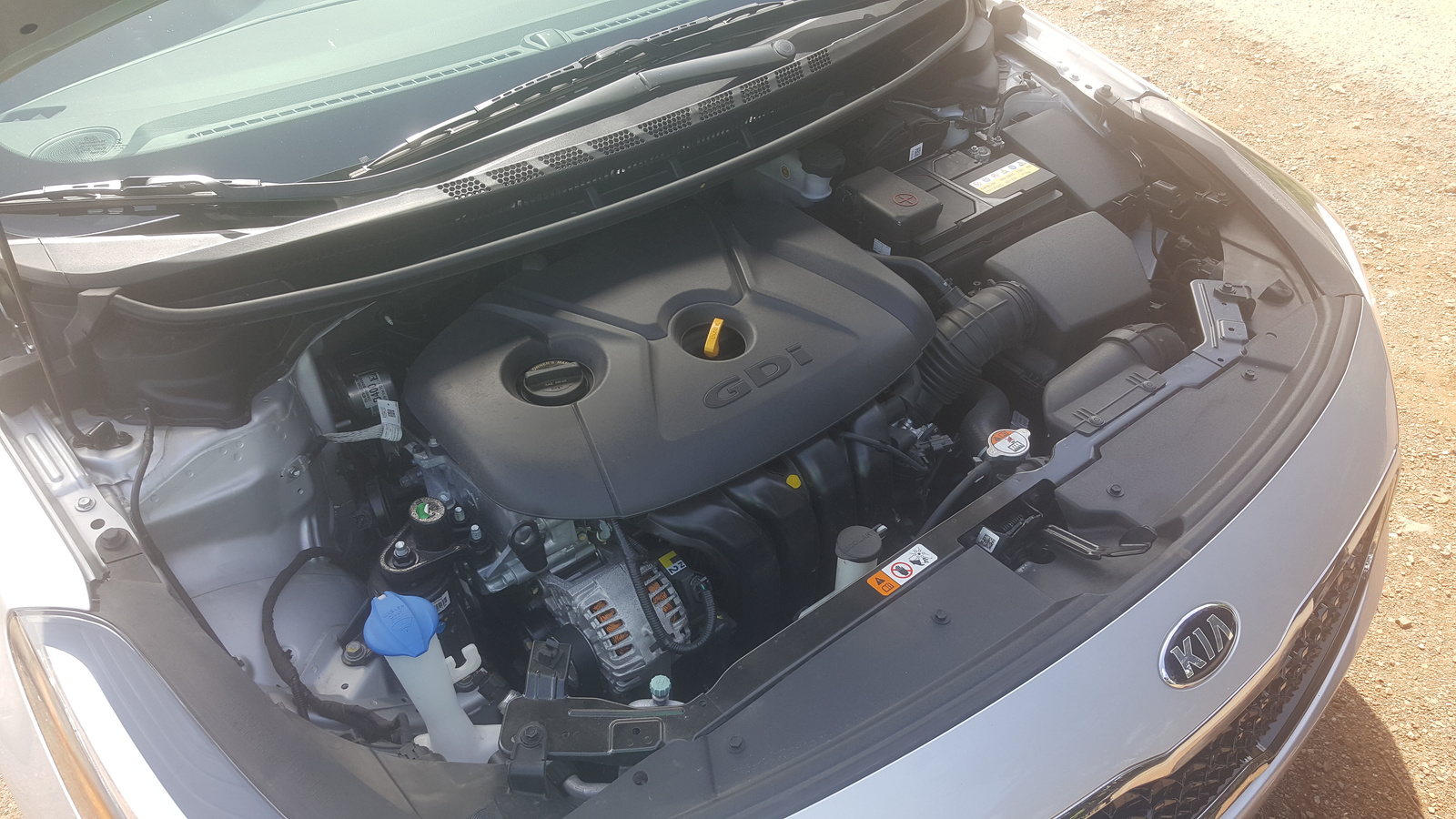 This year the Forte boasts an updated version of the 2.0-liter Hyundai Nu engine we’ve seen in numerous Hyundai and Kia applications for half a decade. With 147 horsepower and 132 pound-feet of torque, it represents a modest power increase for the Forte over the old 1.8, but the big news is in efficiency. Three mpg better in the city coupled with 1 mpg gained during highway travel means the Forte gets a nice bump at the pump. EPA estimates put the new 2.0 at 29 mpg city and 38 highway for a combined rating of 32. If you go with the base LX, you can go with a manual transmission that will drop mileage ratings to 25/34 with 28 combined—a shocking departure from the automatic’s performance.

With the EX, Kia offers a carryover version of the old 2.0, delivering 164 hp and 151 lb-ft of torque, but producing similarly abysmal fuel-economy numbers to the new 2.0 with the manual, with an additional 1 mpg penalty on the highway. Estimates of 25/33 would’ve been impressive 10 years ago, but today they leave you at the bottom of the pile.

Thankfully it provides enough oomph for the little Forte, never feeling particularly strained or overworked. It even has enough zip to encourage some speediness when the road gets curvy, but that’s where you can get into trouble. The suspension on the Forte ends up being a bit stiff when you’re pushing it hard or even going over broken surfaces at medium speeds. The rear gets especially busy over bumps, jumping left and right when encountering anything other than smooth roads through corners. It’s not worrisome in the regular trims, but with the sport suspension in the S, I’m worried that stiffer springs will only exacerbate the problem. That said, switch out the shocks for something with a bit more dampening, and you should have a competent little corner carver. 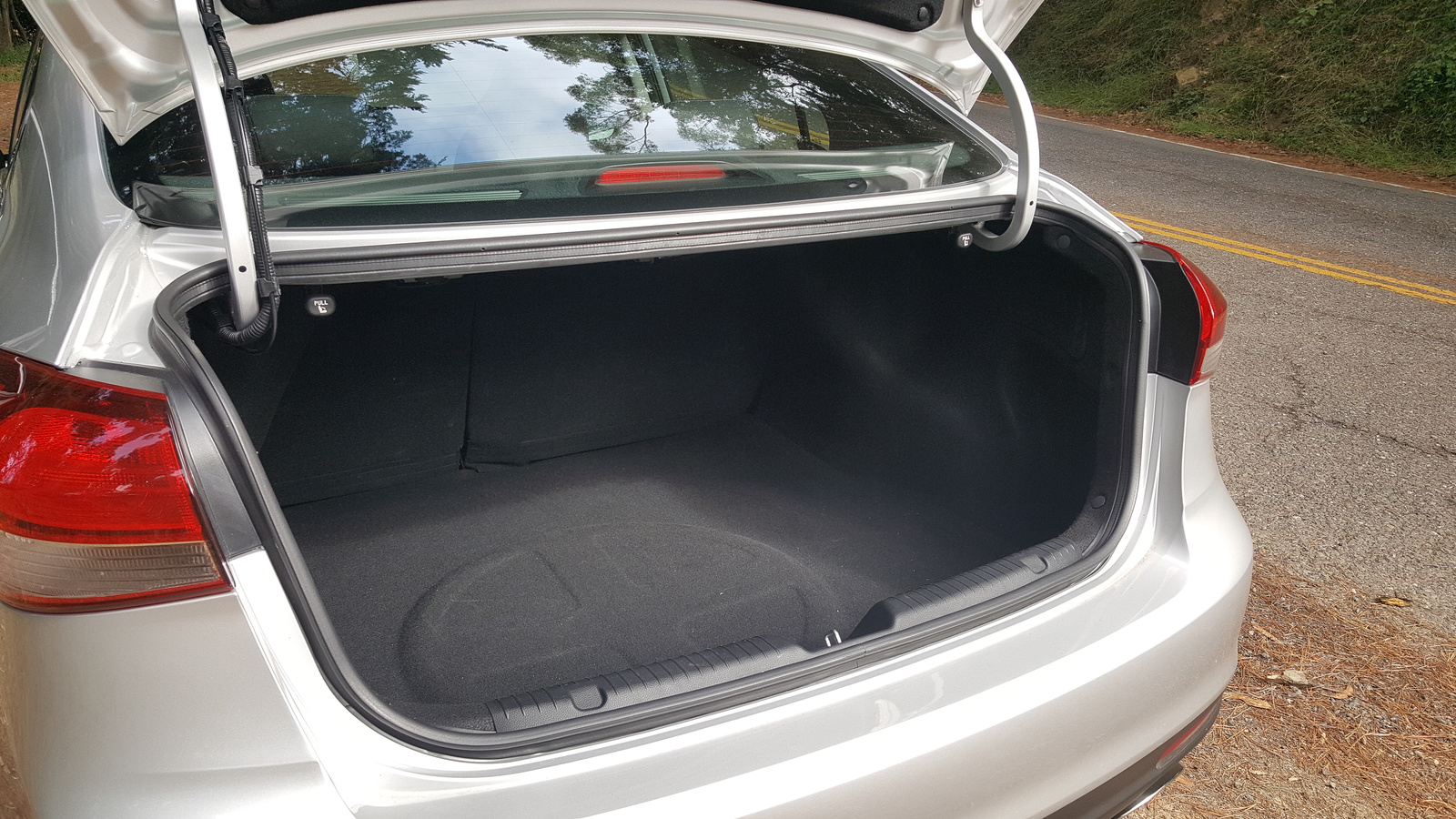 This is where the Forte shines. A 17.4-foot turning radius, ample interior space, and midsize-level trunk capacity all slot the Forte near the head of the pack, where often a model seems to excel in only one or two categories. For an easy example, the back seat here dwarfs that of the Mazda3 and the Focus, though both are more athletic than the Forte, but with 14.9 cubic feet in the trunk, it’s only the Civic’s 15.1 and the Jetta’s 15.7 that manage to do better.

It’s this “total package” quality that makes the Forte jump in the ratings for me. There are options in the segment that can do any one thing better than the Forte, but nearly all of them fail at another, still-important aspect. My one gripe is in how the trims and packages are laid out. Right now, the S seems the most attractive trim—able to tack on safety systems and luxury options if needed or wanted, while still well-equipped even without—but it’s the sport suspension that gives me pause. The EX is a great alternative, but it’s not the easiest pill to swallow given that it still comes with the carryover 2.0. Toss the new mill in there, and Kia has a winner. 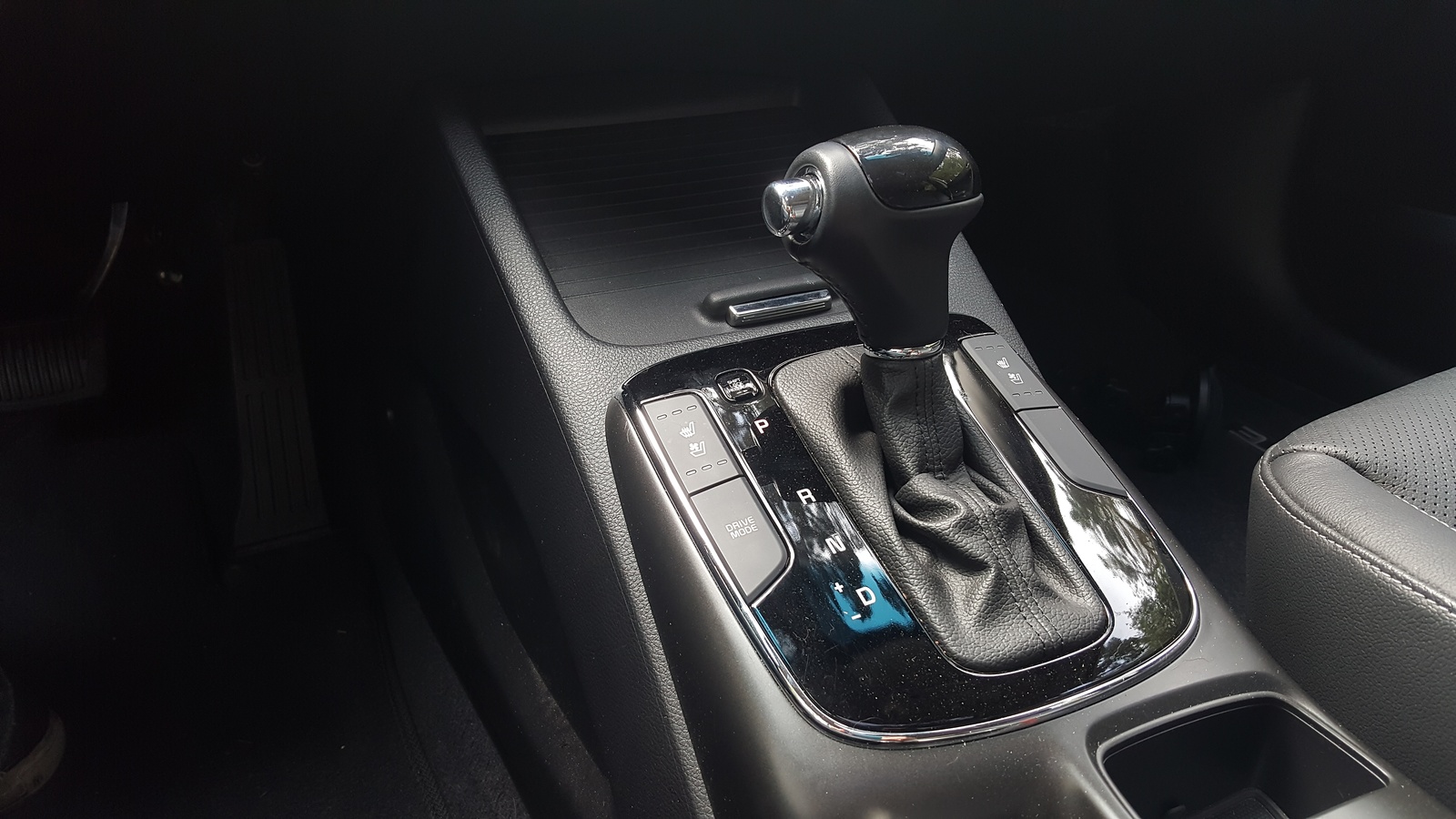 A base LX Forte is about as technology free as allowed by government standards at this point—you have to pay for the relative privilege of a 4.3-inch touchscreen, which is smaller than most smartphones in 2017. But making Apple CarPlay and Android Auto standard for S trims and above is a smart move and one that keeps the Forte competitive.

Moreover, the 7-inch touchscreen and Kia’s UVO infotainment system are a pleasant combination, providing simple, easy connectivity with a classic, logical layout. The upgraded color LCD screen between the gauges in the EX is a nice touch, but hardly a game-changer if you’re choosing between trims.

What I love is that the safety systems here are available in any trim above the base LX. Personally I feel they should be available even at that level, but the S is a good place to start as well. I found the Kia’s safety systems less intrusive than on a lot of other manufacturer's offerings, though you’ll have to decide if that’s a good or bad thing, given the relative exchange rate of prevention to cure.

A couple of small caveats: The 4-speaker stereo in the base LX trim struggles with the job it’s supposed to do. The upgrade of the 2 additional speakers makes a difference at highway speeds, especially for conversation, though the Forte seemed surprisingly quiet even at 70 mph. Additionally, the directional headlights were a dubious upgrade at best, and I found it difficult to gauge the benefit of their crossing left and right as I went through turns. Test them out beforehand to see if you feel they’re worth the upgrade. 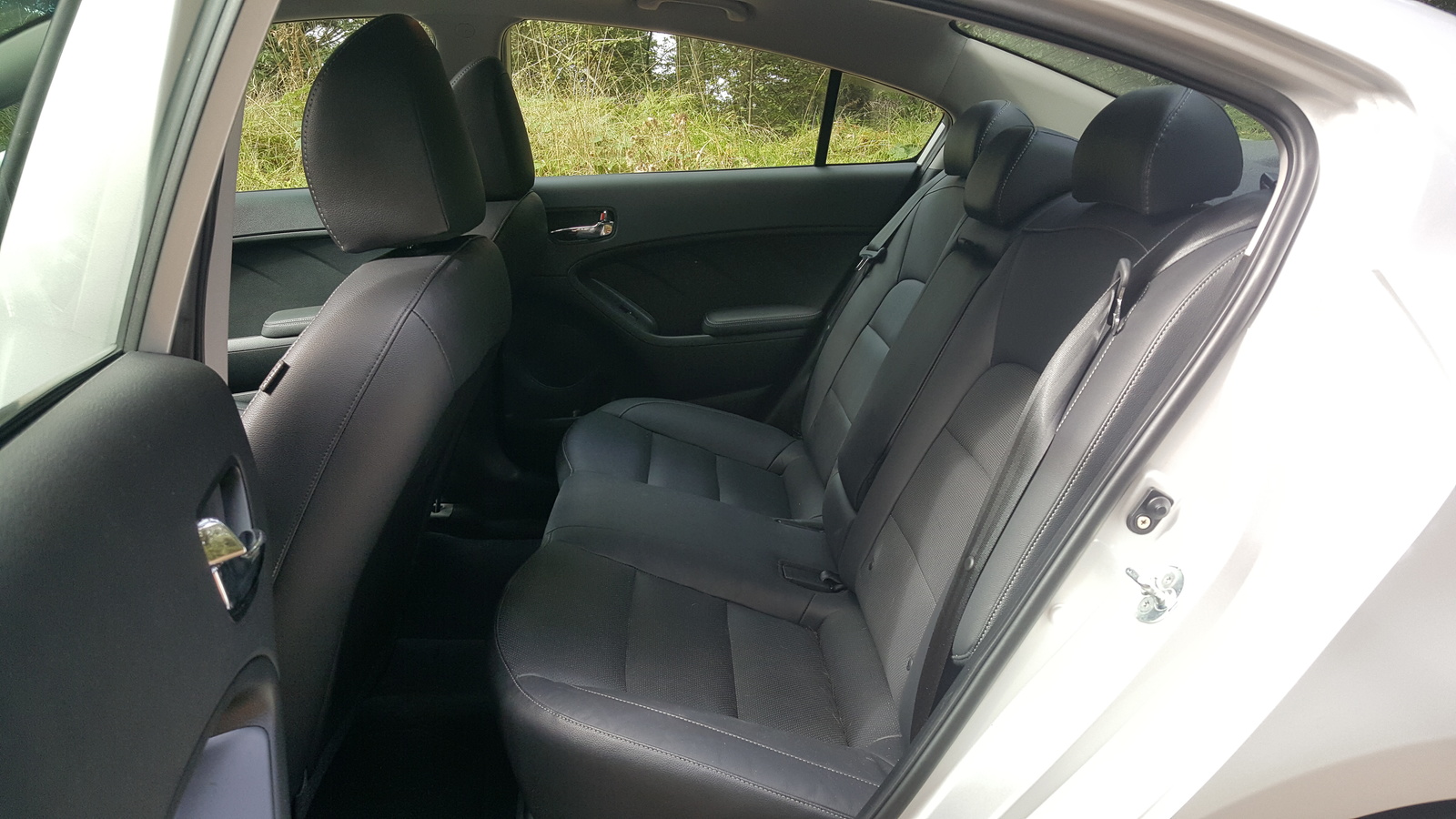 The Forte's wealth of available safety features is backed up by an impressive 60-0 stopping distance of 120 feet that puts it second in the segment. This is perhaps the most important statistic, especially for families. While blind-spot monitoring, rear cross-traffic, forward-collision and lane-departure warning and prevention systems are nice, if the car can’t brake well, early warnings don’t help as much.

While the overall rating from the government’s National Highway Traffic Safety Administration (NHTSA) stands at 5 stars, it should be noted the Forte received a 4-star rating in overall front impact tests—a not uncommon result for the segment. Additionally, the EX’s software allows for teen driver notifications when speed, distance, or time limits are exceeded. 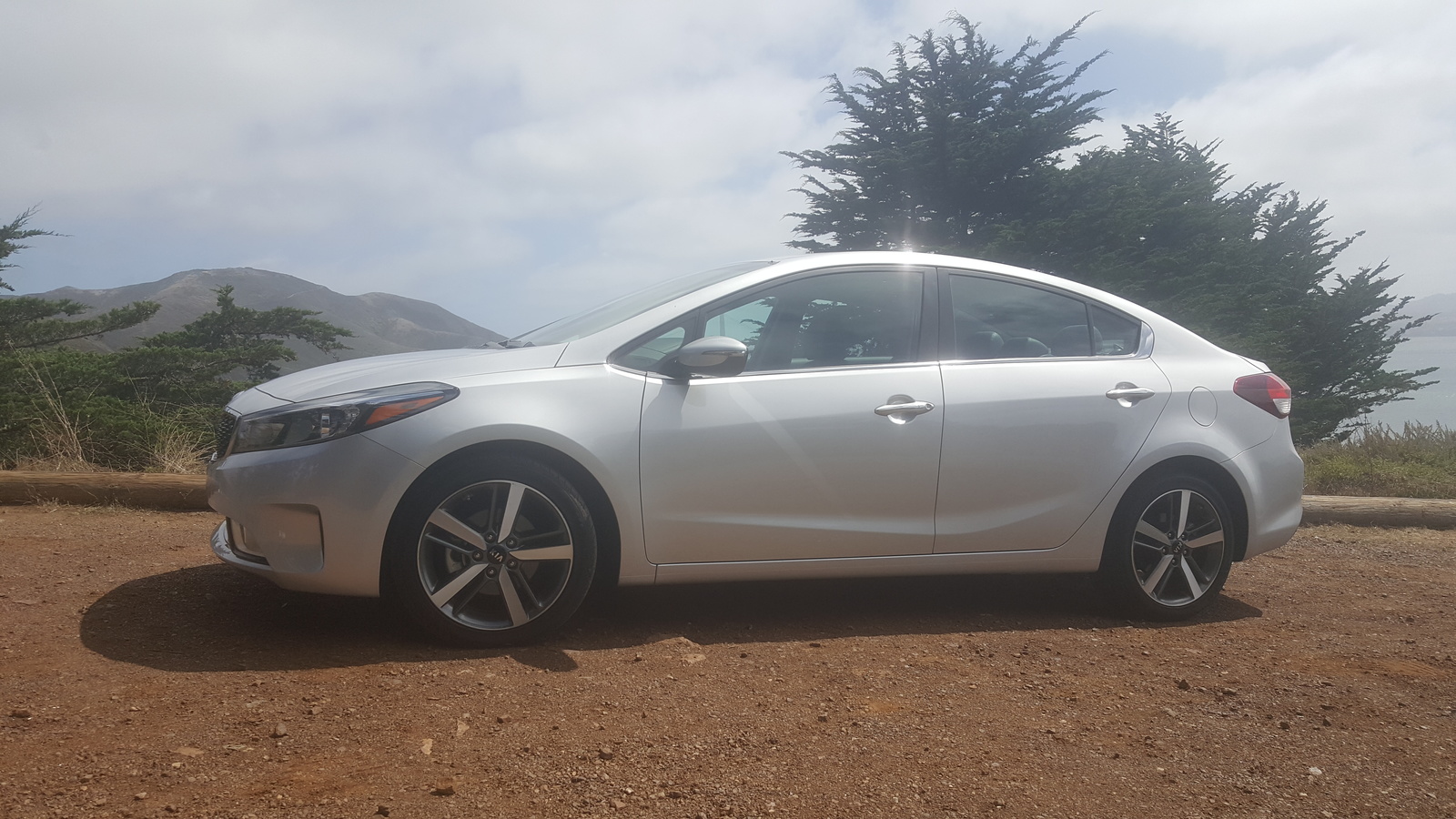 Load up your Forte and you’ll have to pay just as much as you would for some of its most expensive competitors, but you can get a very well-equipped Forte for under 20 grand, a stripper for under 17, and a sporty version with all the trimmings for under 25. What’s more, you’re not sacrificing anything other than your preconceptions when you do. After all, Kia and Hyundai vehicles have been popular residents of reliability lists of late, not to mention those manufacturers' legendary warranty terms.

Kia is currently offering a long list of special financing rates and lease cash incentives, up to 0% and $4000 depending on trim, and lasting until the end of October. If you’ve been thinking of checking out Kia in addition to the usual Honda/Ford/VW offerings, now seems a good time.

Guru5M4WZ Bought our daughter a 2015 Kia Forte LX from North Texas Autos in Denton, TX. Great car, great service and so happy to find something that will be low on the budget for maintenance.

GeorgeLTKF bought a 17 LX. absolutely love it! getting 36mpg in the 5 months that i have owned it.not a single problem with it.was a tough decision between this and the corolla, and i have owned toyotas my whole life.

Guru9X9X62 Drove 17 lx base for over 3 years. Very reliable and mpg friendly. Plenty of space in the trunk. That's the only positives I have for it as the lack of features in the base model made me hate it after awhile. Who offers a car without cruise control nowadays? For a starter car that is reliable and easy on the gas budget, it's perfect. For people wanting some creature features, look elsewhere.

Users ranked 2017 Kia Forte against other cars which they drove/owned. Each ranking was based on 9 categories. Here is the summary of top rankings.

Have you driven a 2017 Kia Forte?
Rank This Car

Why Are Headlights Keep Going Out

Why is kia not recalling the car since the headlights keep going out on everyone cars.

I noticed after it rained the passenger back floorboard is wet. The front is a little damp but nothing else is wet. No seals are broken as I can tell and all glass is factory. Not sure what the iss...

Both headlights all of sudden aren't working! High beams and parking lights work fine. Im confused on the fuse abbreviations. Which fuse am I supposed to check?

I'm having to replace the headlights and brake lights in my 2017 kia forte lx manual 6 speed every 2-3 months. The fuses aren't blowing, no other obvious problems. What are my possible fixes?

What Is Going On With My Gas Gauge?

I have a 2017 kia forte LX. Long story short, I was driving the other night and my low fuel light came on. I had stopped and put $10 in the tank and my gas range had stayed at 36 miles until empty. ...