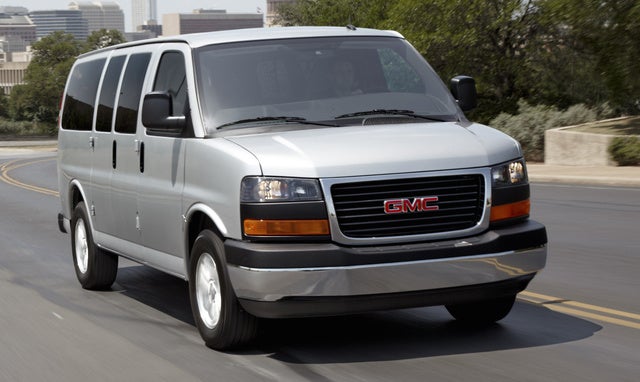 Getting a bunch of folks from here to there is what GMC’s Savana full-size passenger van is all about. But the Savana is beginning to show its age, and competitors are beginning to leave it in the dust. Of course, the Savana can still carry 12 to 15 passengers to the airport or a hotel; it's just that other vans do it using less gas and in greater comfort. There may, however, be a change in the air.

GM, admittedly concerned about dwindling sales figures for its fleet-oriented passenger and cargo vans, has recently hinted of a pending partnership with Nissan that will allow the Savana to ride atop the Japanese automaker’s capable NV platform. With the possibility of styling updates, a new turbocharged gasoline engine, and a debuting 8- or 10-speed automatic transmission, the next-gen Savana's new underpinnings would give it a bit more cache in this limited market--but not until the 2018 model year at the earliest.

There are, however, a few downsides to this potential future. Nearly all reviewers maintain that Nissan’s similarly sized NV is becoming almost as dated as the Savana, and a high-roof option for Jimmy’s hefty hauler, almost a necessity these days, does not seem to be in the works.

At any rate, the 2017 Savana is slated to bring a couple of minor tweaks to the optional MyLink infotainment feature, and redesigned front seats are expected to offer a bit more padding and hip room.

At least one reviewer has claimed the 6.0-liter V8 will be replaced by a turbocharged gasoline engine in the 2017 Savana, but others don't expect this more fuel-efficient option to appear until 2018. Assuming the 6.0-liter V8 does soldier on into 2017, look for a compressed natural gas (CNG) version that puts out 282 hp and 373 lb-ft of torque, with the standard 6-speed automatic.

Meanwhile, a 6.6-liter turbodiesel V8 powerplant is also an option on the 3500 and 3500 Ext trim levels, and is also mated to the 6-speed automatic, its power numbers coming in at 260 hp and 525 lb-feet of torque. Mileage estimates are not available (the turbodiesel is over the weight limit for EPA testing), but look for a 10,000-pound maximum towing capacity from the turbodiesel with the available heavy-duty towing package installed.

All 2017 Savana trims come with a rear-wheel drivetrain (RWD) only.

For 2017, the Savana is anticipated to remain eligible for a wide selection of optional features, including heated power-adjustable mirrors, side steps, a sliding passenger-side door, rear parking sensors, and Bluetooth-integrated MyKey infotainment with 4G LTE WiFi Hotspot capability and a 6.5-inch touchscreen display that interfaces with the standard OnStar system. Other options include GPS navigation (with MyLink), satellite radio, and a rear-view camera.

The 2017 Savana is scheduled to begin showing up in dealer showrooms in late 2016. Competing models include the Ford Transit, Ram ProMaster, and Mercedes-Benz Sprinter.

Have you driven a 2017 GMC Savana?
Rank This Car

Where Is The Spare Tire Located?