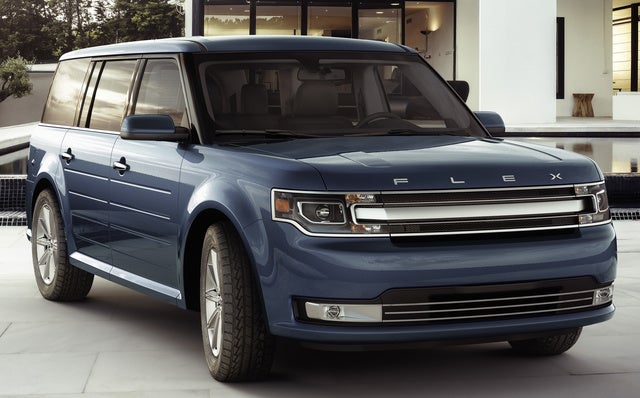 Now in its eighth year and last updated for 2013, the Ford Flex carries on into 2017 largely unchanged. This 7-passenger crossover is unique in sitting far lower to the ground than most other vehicles with a similar capacity. The Flex may feature the retro, squared-off styling of a vintage station wagon, but it also offers modern options like the Sync 3 infotainment system and all-wheel drive (AWD).

For 2017, the only major changes to the Flex involve paint. Ford has added a new light gold finish (White Gold) and a dark blue (Blue Jeans) to replace the bright Kona Blue, the subdued Too Good to Be Blue, and the golden-brown Bronze Fire. The car continues to be available in SE, SEL, and Limited trims. All trims come with 3 rows of seating for 7 passengers, a 6-speed automatic transmission, a leather-wrapped steering wheel, and Ford’s MyKey setup, which can be used to limit the speed, location, and radio settings for certain drivers.

The entry-level Flex SE is available only in front-wheel drive (FWD) with a 3.5-liter V6 engine, which makes 287 hp with a rating of 16 mpg city, 23 highway, and 19 combined. The few available options include satellite radio and roof-rack side rails. Pricing has yet to be announced for 2017, but the 2016 SE started at $29,710, and we don’t expect any major changes.

Step up the Flex SEL, and you’ll get a lot more for a base price of $30,305. Standard features include 18-inch wheels, push-button start, power front seats, dual-zone climate control, and the Sync 3 infotainment system. Options include AWD, remote start, a power liftgate, leather-trimmed seats, 20-inch wheels, a 4-panel panoramic glass roof (the front seats get a power moonroof), blind-spot detection, a premium audio system, and adjustable pedals. With AWD, the SEL is rated at 16, 22, and 18.

The Flex’s Limited trim has some major differences from the SE and SEL. First and foremost is the engine: While the FWD version comes with the standard naturally aspirated V6, every Flex Limited with AWD has a turbocharged 3.5-liter EcoBoost V6 that makes 365 hp. Equipped with AWD and the EcoBoost engine, the Limited receives an EPA rating of 15, 21, and 17 and jumps in price to $37,910. Standard features include 19-inch wheels, a 12-speaker Sony audio system, perforated leather seats, high-intensity discharge (HID) headlights, and blind-spot detection. Option packages have yet to be released for 2017, but adaptive cruise control and collision warning, dual exhaust, a heated and powered tilt/telescope steering wheel, a refrigerated console, inflatable second-row safety belts, and a power-fold third row should all continue to be available.

GuruXK189 The review by Mr. Barry is correct. I already wrote my review in the prior question. We chose a Chrysler 300 because my wife and I changed our mind about the purpose for our new car to get a touring car to travel in retirement instead of a utilitarian boat hauler that still could carry kids and grandkids. I like the Ford Flex tho. When our '84 Dodge needs replacement I'll think again about the Flex.

GuruXK189 So, I did the reviews now I bought a 2017 Chrysler 300 that I like. I'm not car shopping any more. Please stop sending me info on cars for sale. I'll be in touch when I'm looking again.

Have you driven a 2017 Ford Flex?
Rank This Car

I Heard That Only E80 Gas Should Be Used In A Ford Flex?? Is That True?

Why does my 2017 Ford Flex shuts off at 30 minutes unoccupied?