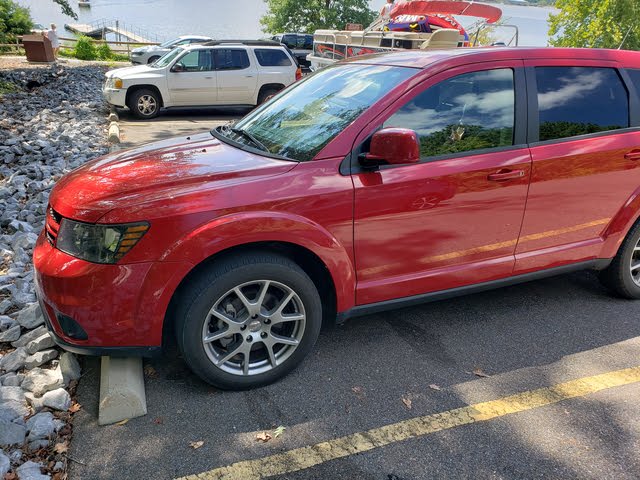 Getting a bit long in the tooth, the Dodge Journey is on borrowed time. This 5- or 7-passenger, 5-door midsize crossover receives no major upgrades for 2017 and hasn’t been overhauled since the 2011 model year--there were even rumors the Journey would be phased out after this year’s production run. As of yet, these rumors have proven false, but it seems fair to assume the end is near. Which is kind of a shame, because despite its shortcomings, the Journey offers a lot of family-oriented value with its available all-wheel-drive (AWD) and features that are ordinarily found in competing models that cost far more.

Look for the 2017 Journey to come in 5 trims, starting with the entry-level SE and climbing through the SXT, Crossroad, Crossroad Plus, and flagship R/T. All trims have roomy front and second-row accommodations, fairly high-end interior materials and workmanship, distinctive exterior styling, and a quiet, competent ride. Cargo space is a healthy 67.6 cubic feet with the rear seats folded, and there are plenty of bins, pockets, and cubbies for stowing smaller items.

The SE, SXT, Crossroad, and Crossroad Plus come with a 173-hp inline 4-cylinder (I4) powerplant, while the R/T packs a standard 283-hp 3.6-liter V6 that's also optional on the lower trims. Front-wheel drive (FWD) comes standard, while full-time AWD is available on all trims with the the V6. Look for 166 lb-ft of torque from the I4, which is managed by a dated 4-speed automatic transmission with fuel-economy figures estimated at 19 mpg city/26 highway/21 combined. The V6 is mated to a 6-speed shiftable automatic transmission and puts out 260 lb-ft of torque. Look for an EPA-estimated 17/25/19 with FWD and 16/24/19 with AWD.

Standard features for the 2017 Journey are modest on the SE and SXT trims, but each does offer a few extras not typically found on value-priced rival crossovers. Premium cloth upholstery, cruise control, telescoping tilt-wheel steering, and dual-zone air conditioning come standard aboard both lower trims, and the SXT adds 17-inch alloy wheels.

Standard safety equipment aboard the 2017 Journey is slated to include typical government-mandated features like antilock brakes (ABS), traction and stability control, side-mounted and head curtain airbags, as well as standard add-ons like active front headrests and a driver knee airbag. Unfortunately, this midsize Dodge mini-ute still lacks such upgraded safety technology as blind-spot warnings, adaptive cruise control, and lane-keep assist, all of which are available to most rivals in the segment. The National Highway Safety Traffic Administration (NHTSA) gives the current Journey 4 out of 5 stars for overall crashworthiness, while the Insurance Institute for Highway safety (IIHS) awards it its highest score of Good on all tests except the small-overlap frontal offset, on which it scored a worst-possible Poor.

Perhaps the Journey’s closest challenger is the Kia Sorento, which offers 3 rows of seating and better power and refinement. For those who don’t need 3-row seating, there are a number of compact crossovers, like the Honda Fit and Ford Edge, that feature better fuel economy, similar cargo capacity, and more upscale features. With the Journey's expected discontinuation, look for Fiat Chrysler Automobiles (FCA) to continue fielding the Fiat 500X and Jeep’s lineup of terrain-busting small SUVs; if you want seating for more than 5, however, you’ll have to go with the full-size Dodge Durango.

TheHorror If you're ashamed of your family, the Dodge Journey will allow you to imagine people view you as someone with an 'active lifestyle'. Hey, it's your midlife crisis; live a little!

TheHorror I suspect Rey is a Dodge salesman. I can tell he is suffering from verbal diarrhea.

Users ranked 2017 Dodge Journey against other cars which they drove/owned. Each ranking was based on 9 categories. Here is the summary of top rankings.

Have you driven a 2017 Dodge Journey?
Rank This Car

2017 Dodge Journey, AC, Nothing Blowing Out The Front Vents.

Click In The Gear Shift When Pump Brakes On Park

my daughter has a 2017 Dodge journey and we are in the middle of the arctic vortex, temps at -20 at night, this morning her check engine light was on, should we be worried, seems to run fine and wa...