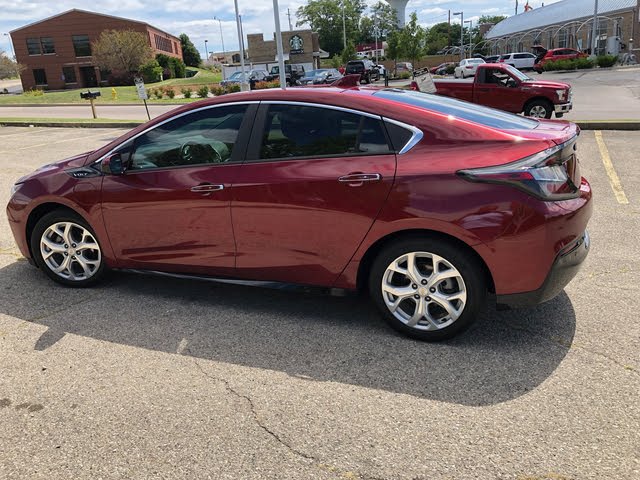 After a significant overhaul for the 2016 model year, the 2017 Chevrolet Volt compact plug-in hybrid hatchback returns with a few additional upgrades. These include seating for 5, an extended all-electric cruising range, and a whole new look; the Volt is also expected to offer a new safety feature and a new exterior paint hue, and should gain eligibility for an upgraded Federal Tier 3 Emissions status. And best of all, in the minds of reviewers, it’s scheduled to go on sale nationwide in the spring of 2016, as opposed to a more traditional launch in selected states.

The 2017 Volt is slated to return in 2 trims, the base LT and the top-shelf Premier, both available only in the front-wheel-drive (FWD) configuration. According to most in the media, cabin room is again tight, especially in the rear seats, though cargo area behind the rear seats remains a comparatively spacious 10.6 cubic feet. The rear seats can also split-fold for a significant addition to cargo space, though Chevy hasn't said how much more.

The upcoming model year should see the addition of adaptive cruise control to one of the optional Driver Confidence packages, and the choice of a new Citron Green Metallic exterior color. This new paint color is more of a promotional ploy, however, and will be available only on a limited basis.

Powering the 2017 Volt is a 1.5-liter engine/generator, a pair of electric motors, and a single-speed direct-drive transmission. Look for 149 hp and 273 lb-ft of torque from this powerplant, "fueled" by a state-of-the-art 18.4 kWh (kilowatt per hour) lithium-ion battery. The Volt is primarily driven by the electric motors, while the gasoline engine and regenerative braking system provide on-the-road charging for the battery pack. Chevy claims a 53-mile all-electric cruising range, and at least one review of the 2016 version reported a max range of 62 miles on battery power alone, which is distinctly commuter-friendly. With a full electric charge and a full tank of gas, the Volt is estimated to have a range of 420 miles. When running on gasoline only, the 2017 Volt is expected to achieve an estimated 43 mpg city/42 highway/42 combined. Driving with both gas and electric power should return the equivalent of 102 mpg combined.

Other fuel-efficiency features for the 2017 Volt include 4 driver-selectable modes, Normal, Sport, Hold, and Mountain, and a steering-wheel-mounted paddle-shifter offering a Regen on Demand mode that adjusts the electrical charge directed to the battery by regenerative braking. For those using the plug-in feature, this compact hatchback’s battery can be fully recharged in about 13 hours using a household 120-volt outlet, and the available 240-volt dedicated outlet will fully charge the Volt in about 4.5 hours.

The 2017 Volt Premier will also feature wireless cell-phone charging capability and a standard auto parking-assist feature for both parallel and perpendicular parking challenges.

With Toyota’s recent deletion of its Prius Plug-In Hybrid, the Volt is challenged by the likes of Ford’s C-Max Energi and Fusion Energi (both of which are roomier than the Chevy), and BMW’s smaller i3.

What's your take on the 2017 Chevrolet Volt?

greerfamily We have a 2017 Volt and are looking to purchase another one.

Users ranked 2017 Chevrolet Volt against other cars which they drove/owned. Each ranking was based on 9 categories. Here is the summary of top rankings.

Have you driven a 2017 Chevrolet Volt?
Rank This Car

What Does A Private Seller Pay In Fees For Sale Through CarGuru?

How Many Years Chevy Volt Spare Parts And Maintenance Is Available

Chevy volt is discontinued model, if we buy used car, what problems we may face, how many years spare parts and maintenance is available in the market.

Being An Out Of State Driver

Dp we have to travel to CarGuru car dealer, or is the car delivered to a local dealer?

Hello, I found the car I want at a dealer. But I found it because of Car Gurus. So how does this work? I have seen the commercial and I can detail my car to trade to the max. I just wondered is th...