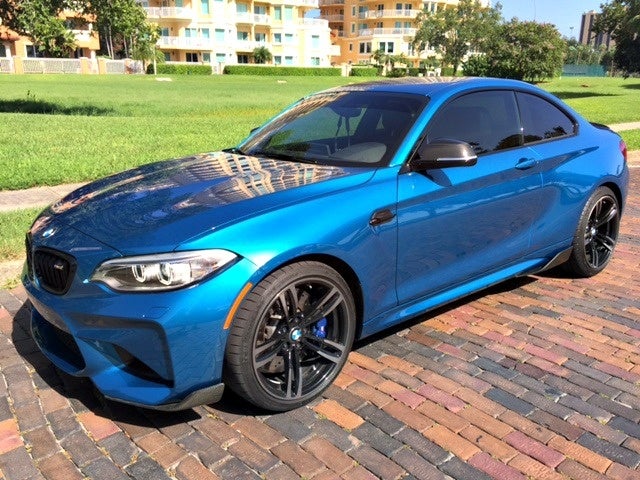 Whenever a new version of a sports car is introduced, an automotive enthusiast is bound to say something to the effect of “the old one was better to drive.” As various improvements and new technologies are introduced to improve the performance and usability of cars, enthusiasts believe that the feeling of being one with the car is beginning to vanish. No automaker has received more of these complaints than BMW’s M division. The past few years have seen the German automaker's performance arm introduce a number of new technologies that were said to make its vehicles faster, but at the cost of driver involvement. M knew it had to rectify this. Last year, BMW introduced the M2 coupe, with which it earned raved reviews from many who believed M was going back to its purist roots by having the driver and car work as one. For 2017, BMW’s M division isn’t making any drastic changes to its smallest model.

Although the M2 is based on the 2 Series Coupe, it has its own distinctive look. Up front is a new bumper with wider vents and fins to provide additional cooling for the brakes. Wider fenders cover up a set of fat performance tires, and a set of 19-inch aluminum forged wheels is standard. Around back is a rear diffuser with quad exhaust tips.

The M2’s interior doesn’t feature any drastic changes from the standard 2 Series coupe aside from new seats with increased bolstering and the use of faux suede. This isn’t a bad thing, as the 2 Series features one of the better interiors in its class. The dash is smartly laid out, with the center stack angled slightly towards the driver and a logical control layout. All M2s feature an 8.8-inch screen with BMW’s iDrive infotainment system, where you can control audio, climate, navigation, and other key settings. It will take you a few moments to understand how to use the rotary knob and touchpad. But once you do, you’ll find iDrive to be one of the more intuitive systems on the market.

Space in the back is best reserved for small kids due to the limited amount of headroom and low placement of the seat cushions. One surprise is how practical the M2’s trunk is. Pop open the lid and you’re greeted with 13.8 cubic feet of space, making it one of the largest trunks in its class. For additional space, you just need to fold the rear seats.

Under the hood lies a 3.0-liter TwinScroll turbocharged inline 6-cylinder engine with 365 hp and 369 lb-ft of torque. Power is sent to the rear wheels via a 6-speed manual transmission with automatic rev-matching or a 7-speed dual-clutch gearbox (known as a DCT) with steering-wheel-mounted paddle shifters. BMW says the M2 can hit 60 mph in 4.3 seconds with the manual. Opt for the DCT and the 0-60 mph time drops to 4.1 seconds. Top speed is electronically limited to 155 mph but can be raised to 168 mph if you opt for the M Driver’s package. The M2 features the Active M Differential--this electronically controlled multi-plate limited-slip differential monitors wheel slip and will lock one of both rear wheels if it detects the loss of traction.

For all the performance on offer, the M2 doesn’t drink gas like it's going out of style. EPA fuel-economy figures stand at 18 mpg city/26 highway/21 combined for the manual and 20/26/22 for the DCT.

BMW’s M division made some key changes to the 2 Series’ chassis for the M2. Certain suspension components are made out of aluminum to help cut weight. There is also a chassis brace to improve the vehicle's overall stiffness. Larger brakes help bring the M2 to a quick stop.

For safety, the M2 comes with side airbags for the front seats, full-length side curtain airbags, traction control, and stability control. Add the Executive Package to get a backup camera, rear parking sensors, lane-departure warning, frontal-collision warning, and automatic emergency braking.

Pricing for the 2017 BMW M2 begins at $52,695, with a $995 destination charge. The DCT adds $2,900 to the base price. The only real change of note deals with the optional Executive Package. For 2017, BMW is adding wireless phone charging and the ability to make the M2 into a Wi-Fi hotspot to the package.

Why Does It Say High Price?

My M2 listed for sale shows CG saying high price. Does not allow for two optional packages (DCT transmission and Executive package) or speed film in assessing the price comment by CG...why and how d...

Hello there, when I download CDs to my i-drive hard disk, the name of the songs are displayed but not the album cover picture, not really a problem but any thoughts? Many thanks