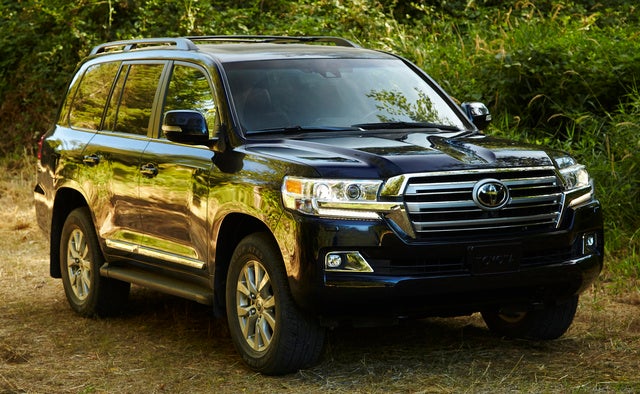 The Toyota Land Cruiser full-size SUV, one of Toyota's leading luxury models, enters the 2016 model year sporting a subtle new look and a number of upgrades. But although the 2016 Land Cruiser retains the hefty off-road capabilities that made it a staple of Amazonian exploration, it has perhaps become more notable for climbing snow-covered driveways than tackling mountain passes.

In any case, the 2016 Land Cruiser is offered in only a single Base trim. The 8-passenger Base gets various exterior upgrades for the upcoming year, including a boxier profile, restyled front and rear bumpers, up-ticked alloy wheels, projector beam LED headlights, a new chrome-heavy grille, and LED brake lights. The interior features a reworked center console and more intuitive controls with which the automaker hopes to make the cabin appear less dated. New Siri Eyes Free technology complements a brand new Qi wireless charging system, and upgraded steering-wheel-mounted cruise control and infotainment buttons now interact with Toyota’s Bluetooth-integrated Entune infotainment.

A further improvement for the 2016 Land Cruiser is the introduction of an 8-speed shiftable automatic transmission, replacing the old 6-speed gearbox. The new transmission manages a standard 5.7-liter V8 powerplant to produce 381 hp and 401 lb-ft of torque--but it doesn't help with fuel economy estimates, which will stay at 13 mpg city/18 highway/15 combined. Maximum towing capacity is a respectable 8,100 pounds with the standard trailer hitch and wiring.

The 2016 Land Cruiser boasts full-time 4-wheel drive (4WD) with a 2-speed transfer case, auto-locking hubs, and descent control. Also standard is a limited-slip locking center differential, as well as Multi-Terrain Select function that allows drivers to adjust throttle pressure, shift points, and braking in order to handle a variety of surface conditions. There's even a Multi-Terrain Monitor that gives you a 360-degree view of the landscape immediately surrounding the vehicle. And Standard Crawl Control automatically adjusts wheel and suspension articulation at low speeds while traversing rocky terrain.

Returning exterior features for the 2016 Land Cruiser include a standard power sunroof, a roof rack, step running boards, heated power-adjustable and auto-dimming mirrors, and a trailer hitch and wiring.

What's your take on the 2016 Toyota Land Cruiser?

Have you driven a 2016 Toyota Land Cruiser?
Rank This Car

What Is The Best Tire For A 2016 Toyota Land Cruiser?

92 views with 1 answer (last answer about a year ago)

On The Bumper Their Are Holes , And I Would Like To Know Were To Get A Plat...