Average user score
4 ⁄ 5 stars
Based on 28 reviews
Review by Matt — I loved the way it drove and the comfort of the drivers seat. It feels like a luxury ride. Read more
Review by Xaycosy — I think its a good for family car..got 3rd roll sit n more.. Read more
Review by Vannareth — Good car but. Too much. And miles too,high. Read more 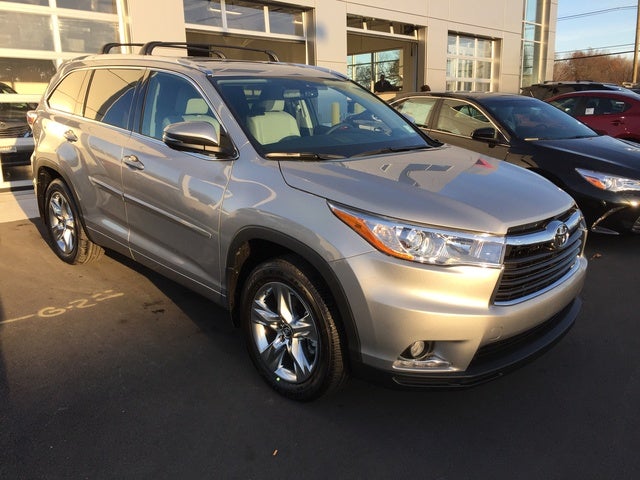 Always a player in the midsize crossover market, Toyota’s 2016 Highlander returns with only a single noteworthy upgrade. The once optional Towing package, with a heavy-duty radiator, 200-watt fan coupling, transmission fluid cooler, and beefed-up alternator, is now standard on all V6 Highlander trims. Otherwise, this family-oriented mini-ute keeps its 3 rows of seating (for up to 8 passengers), a pair of engine choices, all-wheel drive (AWD), and a hefty share of standard appearance features and creature comforts.

The 2016 Highlander lineup remains unchanged from 2015, with the base LE, the LE Plus, the midlevel XLE, the Limited, and the flagship Limited Platinum. The Highlander Hybrid, available only in the Limited trim, returns for 2016 as well, but is covered in a separate overview. The non-hybrid Highlander comes with standard front-wheel drive (FWD) and optional AWD. It sports a hefty 83.7 cubic feet of cargo space with the rear seatbacks folded, and can tow up to 5,000 pounds of trailer when equipped with the V6 powerplant and the newly standard towing package.

Powering the 2016 Highlander LE is a standard 2.7-liter inline 4-cylinder (I4) engine mated with the traditional 6-speed shiftable automatic transmission to put out 185 hp and 184 lb-ft of torque. Expect mileage to remain 20 mpg city/25 highway/22 combined in the FWD base LE. Optional in the FWD LE and standard for all other 2016 Highlander trims is a peppy 3.5-liter V6 paired with the 6-speed shiftable automatic for 270 hp and 248 lb-ft of torque. Mileage for FWD Highlanders toting the V6 remains 19/25/21, with AWD-equipped trims coming in at 18/24/20.

The National Highway Transportation Safety Administration (NHTSA) gives the 2016 Highlander its best rating of 5 stars for overall crashworthiness, while the Insurance Institute for Highway Safety (IIHS) awards the Highlander its best mark of Good in all tests except for the newly instituted small-overlap frontal-offset exam, where it gets the Institute’s second-highest Acceptable score.

Owners of the 2015 Highlander again complain about the I4’s tepid gas mileage, and some describe the V6 as a bit sluggish as well. The Highlander’s brakes also lose points with a number of owners, while others find the infotainment system to be occasionally frustrating. On the positive side, owners laud this midsize crossover’s looks and roominess, and folks living in northern climates praise the available AWD system for its performance in snowy driving.

What's your take on the 2016 Toyota Highlander?

Karen We got the Highlander Hybrid. Love it!! Ours is the LIMITED and only option it doesn't have that I wish it did is the backup sensors. I assumed with all the options on the LIMITED it would include that safety feature. Other than that .... no complaints.

Users ranked 2016 Toyota Highlander against other cars which they drove/owned. Each ranking was based on 9 categories. Here is the summary of top rankings.

Have you driven a 2016 Toyota Highlander?
Rank This Car

how do I get the interior light to work when I open the doors?

Having Problem Starting. Get A Clicking Sound. Is My Battery Any Good

i have a 2016 toyota highlander how do I know if I need a new battery?

I had a 2007 Durango but want something a little smaller in total square foot size. Checking out the Toyota Highlander, 2016.

If I lose a key fob for a 2016 Highlander and have it replaced with a new fob from a Toyota dealer does the second unlost fob reprogrammed or is the new fob programmed to be the same as the old unl...