The Nissan Altima has been given a deep refresh for 2016. With crisp new styling, excellent economy, and a lot of tech, it makes a high-value case for itself. 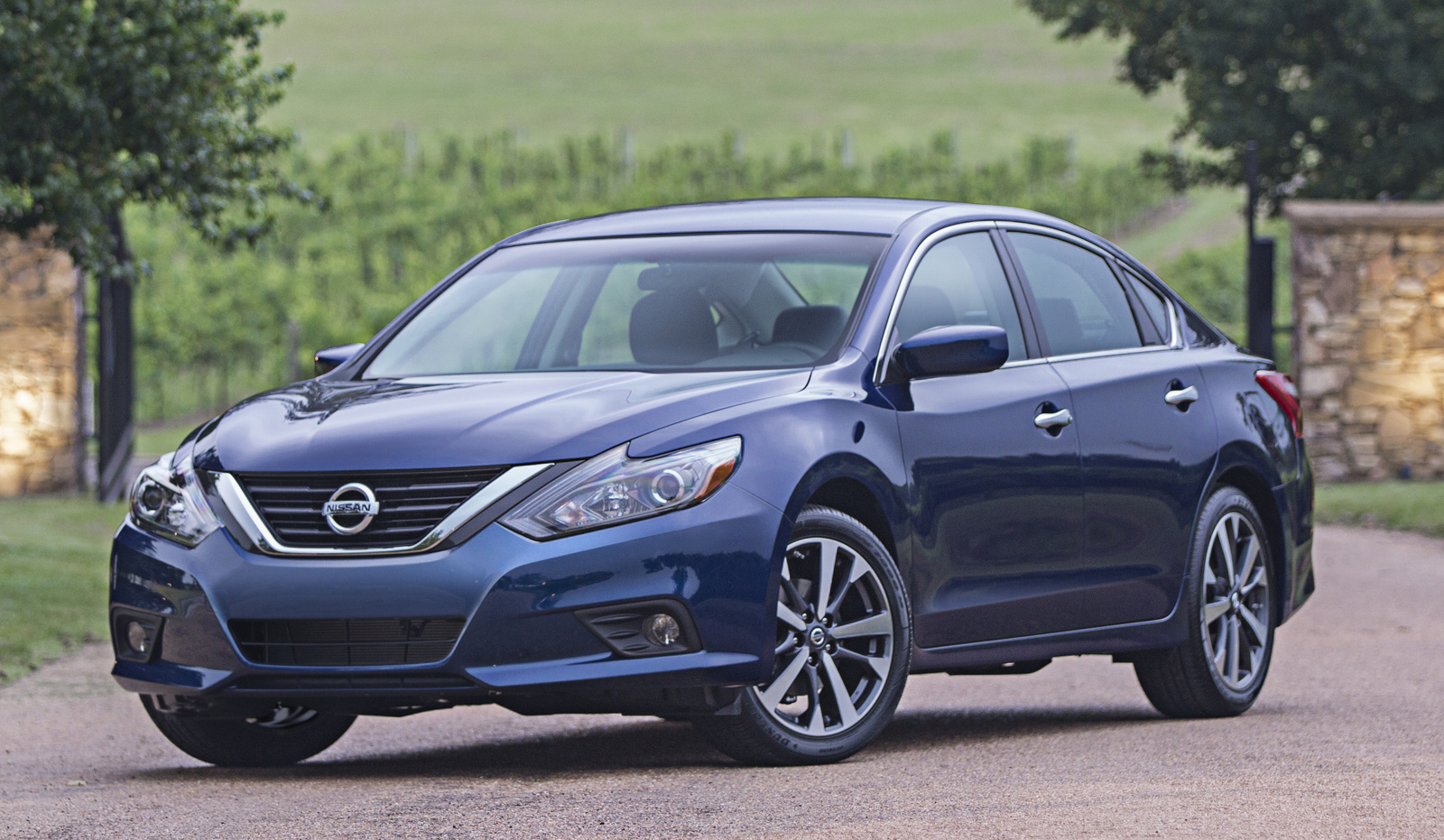 The 2016 Altima is Nissan's big-selling midsize sedan. Its mission is to offer a lot of space, plenty of value, and also deliver a good bit of comfort and economy, and look good doing it. That’s a tall order, and the competition is very fierce. The Altima manages to stand out with distinctive styling and a friendly, accommodating cabin. 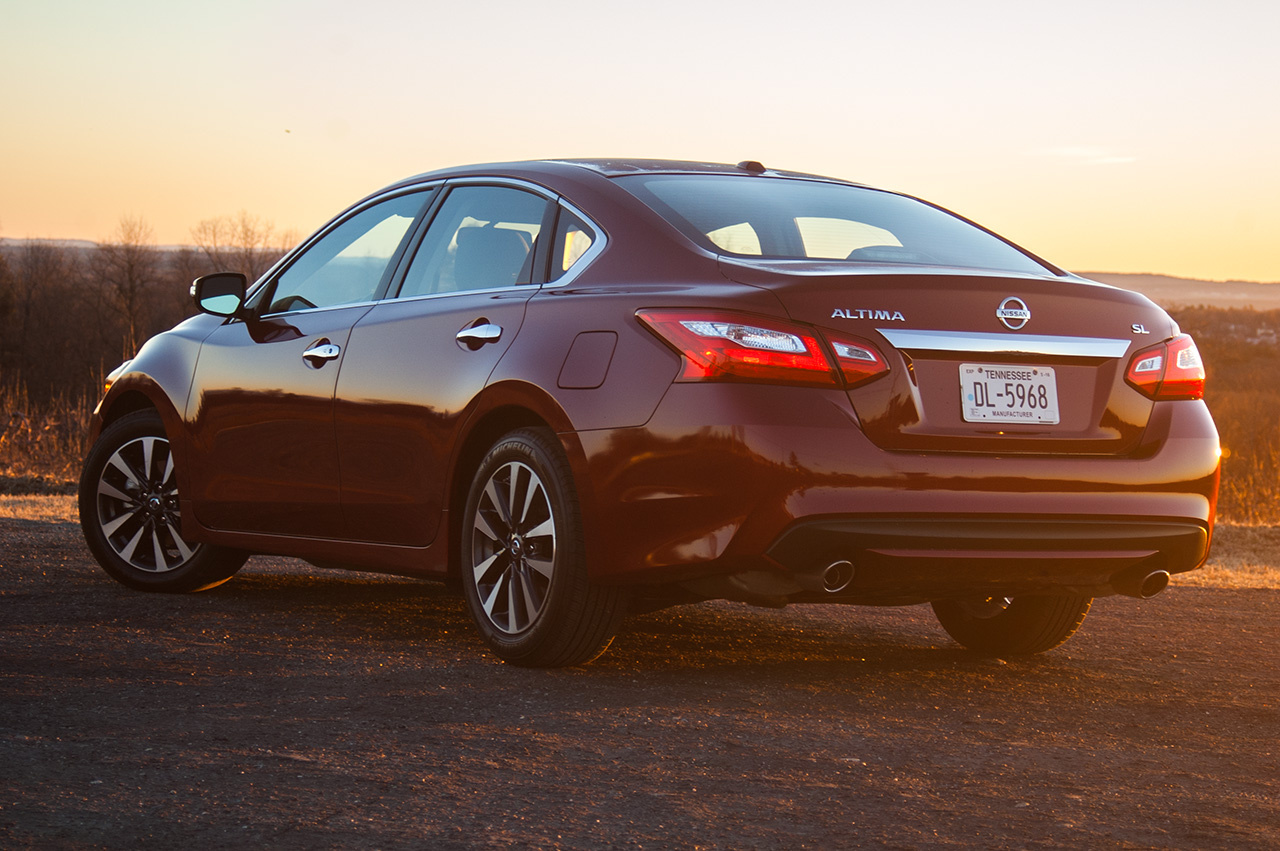 For 2016, the Altima has been given revised front and rear styling. It’s a fresh look that’s in line with the equally new Maxima and Murano models. Within the re-shaped headlamps, the Altima carries LED low-beam headlamps and also LED daytime running lights.

Although the styling is only partially new, it’s a significant improvement. The overall look of the Altima gels better with the new front end and revised tail lights. Despite its better looks, it’s not the style leader for its class. It’s not drab, and because it strikes a good balance between form and function, drivers benefit from good visibility while passengers are treated to comfortable amounts of leg- and headroom.

The aerodynamics of this revised body design are excellent. The coefficient of drag (Cd) drops to a wind-cheating .26, an exceptional figure for a production sedan. Careful airflow management is a key to the improvement. Active grille shutters and underfloor covers smooth turbulence and direct air around the car to reduce drag. Other changes for 2016 include new 17- and 18-inch alloy wheel designs, a Deep Blue paint color, and a sportier SR trim level. 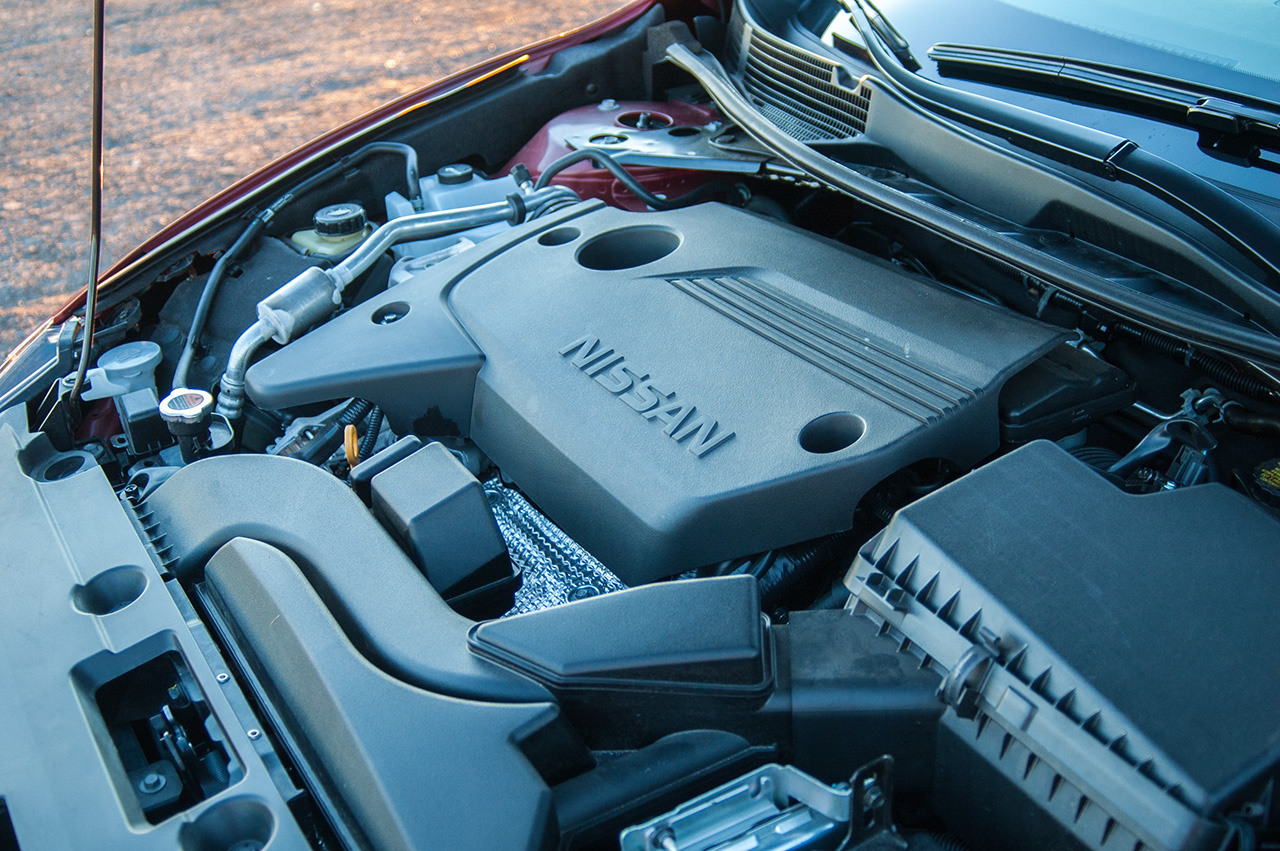 The model I drove was the Altima 2.5 SL, powered by a carried-over 2.5-liter 4-cylinder engine. This engine has proven itself over many years of powering Nissan vehicles, and its 182 hp and 180 lb-ft of torque are competitive for an engine without a turbocharger in this class. It’s paired well with the CVT automatic, which provides smooth, stepless control over gearing. On the highway, the CVT keeps the engine speed down, making for quieter, more-relaxed cruising that’s also more efficient.

The performance of the 2.5 SL never felt inadequate, though drivers who wish for a real shove will likely prefer the 270 hp of the 3.5-liter V6. The Altima does not offer a hybrid option, but fuel economy with the 4-cylinder is good, especially for a car this size. The EPA estimates the Altima 2.5 will return 27 mpg city, 39 highway. That calculates out to a combined 31 mpg rating in mixed driving, exactly what I observed during my time with the car. With the V6, expect to see 22/32.

Instead of feeling under- or overpowered, the Altima felt “just right.” Its suspension has been tuned to control body motion precisely while also soaking up bumps. It’s no sports car, but the Altima corners well and doesn’t wallow around. Active Understeer Control counteracts bad behavior in curves by applying subtle amounts of braking to the inside wheels to help drivers carve a pure arc without pushing the nose wide or tail-sliding drama. The Altima doesn’t deliver disciplined motions and dynamic delight built into the chassis of the Honda Accord, and while it’s solid, it’s not quite the same rolling slab of granite as the Ford Fusion.

The weight of the electrically assisted steering feels right, but road feel is nearly entirely filtered out, so it’s numb at the same time. The overall feeling from the driver’s seat is that this car is responsive enough to satisfy just about everyone, and it may be a pleasant surprise for some. Road noise has been reduced by the use of more sound-deadening material, and the CVT plays a role by keeping the engine speed low at cruise. Because it doesn’t turn even mundane drives into delight, serious driving enthusiasts will probably not be swayed by any Altima model besides the SR with its upgraded suspension. But for most people, the road manners of any Altima trim level leave little to complain about. 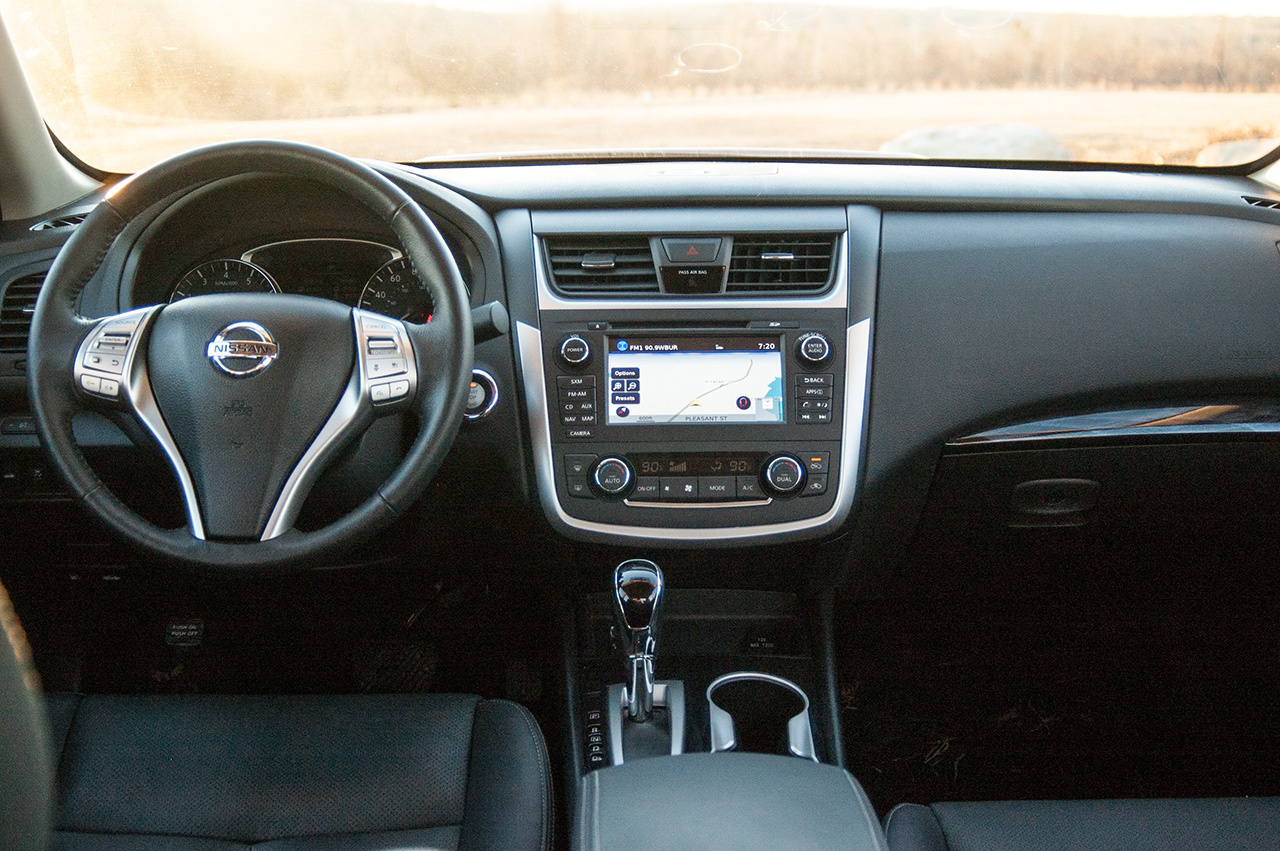 The Altima is designed for ease of use. Its Zero-Gravity seats are very comfortable, even after hours in the saddle. Controls are simple and laid out clearly, and there’s lots of room front and rear. The driver’s interface is a chunky steering wheel with buttons for audio, speed control, and voice command, well-located stalks for directionals, wipers feel solid and high quality, and the steering column tilts and telescopes. Secondary controls are mostly the 7-inch touchscreen for navigation, entertainment, and information, and a pair of knobs and only a few buttons for the dual-zone climate control system. There are also some buttons on the console between the front seats for seat heaters and brake hold.

The limited amount of clutter the driver is forced to deal with gives the impression that Nissan carefully considered its choices. Because it’s not confusing to operate, the overall experience is that much more pleasant. There’s also a lot of handy storage, from the enormous glovebox, to door pockets, a large bin under the front center armrest, and the cupholders, which have been revised to accommodate mug handles.

In 2.5 SL trim, the Altima cabin is somewhere between average and luxury. The quality of interior plastics is solidly average, which means it looks and feels good, but you can still find areas of cost savings, such as painted silver accents, which may not hold up. The accent trim has a unique pattern, which may not be everyone’s cup of tea, either, and it’s polished to a high gloss. The power-adjustable leather-trimmed seats of the SL lift the experience above the standard cloth upholstery, and a Bose audio system sounds good, too.

Just like the very roomy back seat, the Altima has a trunk that’s big. It’s almost 16 cubic feet, making it larger than the class average. The thoughtful design extends back here, too. The speakers, torsion springs, and wiring all tuck up and out of the way, giving a clear path for cargo and minimizing the possibility of a snag. The seatbacks fold down, as well, opening up more room when needed. Even the shape of the trunklid adds to its usefulness. The opening is large, presenting clear access to most of the room inside, a contrast compared to other cars that trade usefulness for styling. 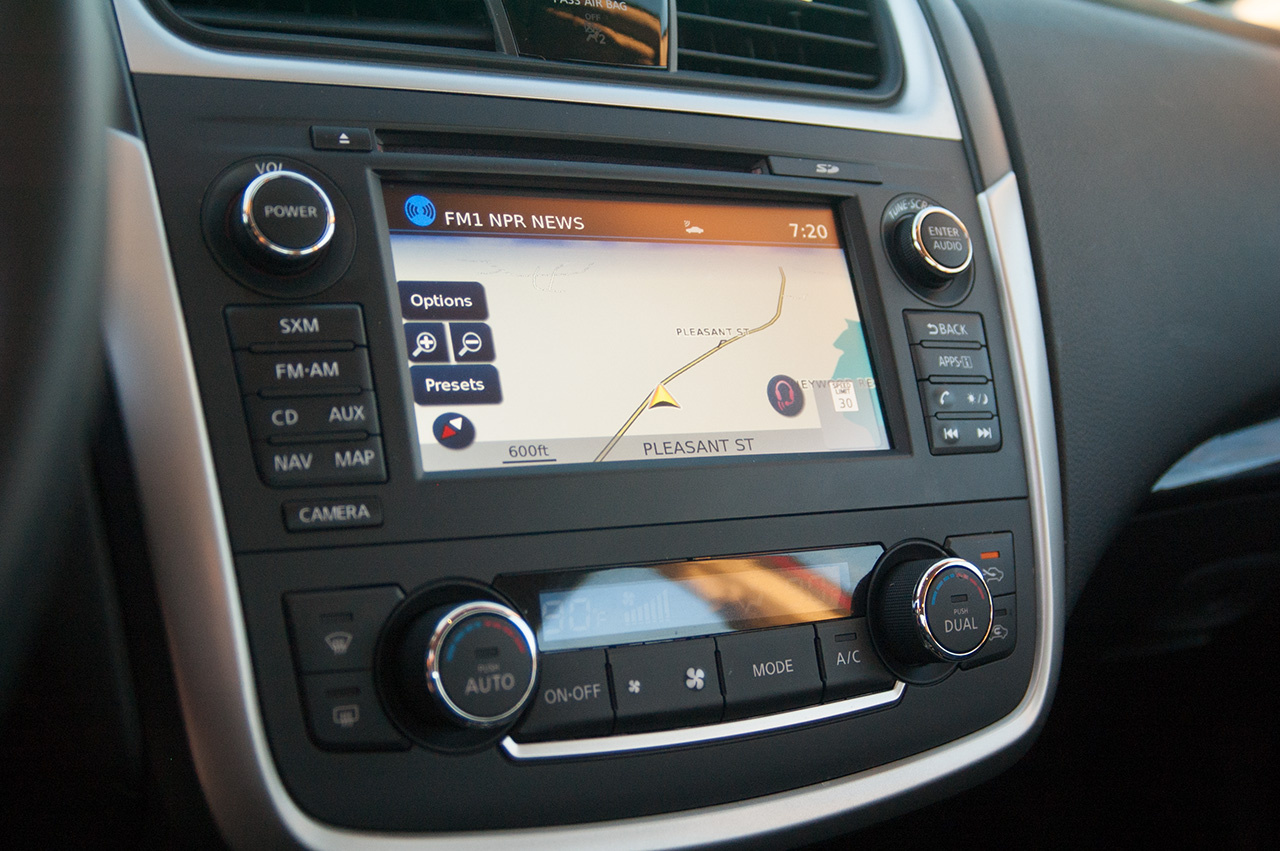 Nissan’s infotainment system can include navigation, voice command, terrestrial and satellite radio, and Bluetooth. The standard system is a 5-inch color display with a screen that doubles as the rear-view camera display. NissanConnect with Mobile Apps adds new functionality such as integrated Facebook. A 7-inch display accompanies the NissanConnect Navigation with Mobile Apps system. The screen feels small, especially in light of competitors now offering larger, and even multiple displays. The size of on-screen information displays and soft buttons adds to the cramped impression, though the larger icons make the system easier to view at a glance and operate while driving.

The navigation and infotainment system itself operates well. Nissan has put a lot of functions right at your fingertip with the voice-command system, which is an easy and capable way to program destinations, switch functions, and more, all while driving with both hands on the wheel and your eyes on the road. In front of the driver, the instrument panel carries a 4.3-inch LCD called the Advanced Drive-Assist Display. It helps funnel information to the driver with less distraction, as well, displaying navigation settings, text messages, travel directions, and phone functions.

The Altima SL I drove also carried a bunch of active safety technology including dynamic cruise control, blind-spot warning, and predictive forward collision alert with emergency braking. It’s a suite of driver aids that you’d previously have found only on higher-end cars, and it’s a surprise to find it so affordably priced here in the Altima. The system isn’t quite as finely tuned as the ones in higher-end cars, but most of the rough edges of earlier systems have been smoothed out. 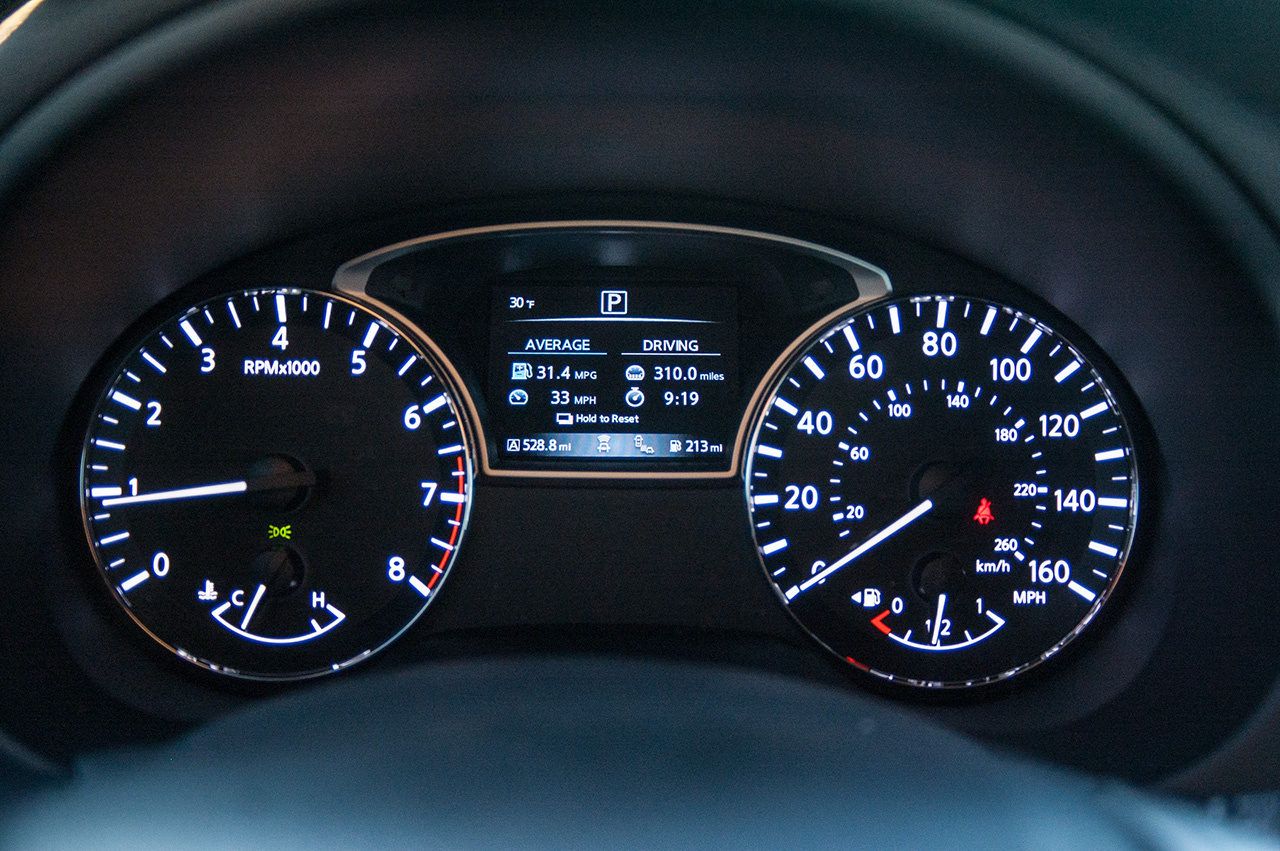 The 2016 Altima hasn’t been rated by the National Highway Transportation Safety Administration (NHTSA) yet, but expect it to return a 5-star overall performance. That assumption is based on the 5-star rating of the 2015 model and the fact that the 2016 car is an update. The IIHS has given the 2016 Altima its top rating of Good across all categories, including the tough new small-overlap frontal crash test. That’s an improvement over earlier Altima models.

The passive safety is up to par, the handling is stable and predictable, especially since the Altima actively wards off under- and oversteer, and the available active safety equipment includes 6 standard airbags. Sum it all up, and the Altima stacks up well for occupant protection. 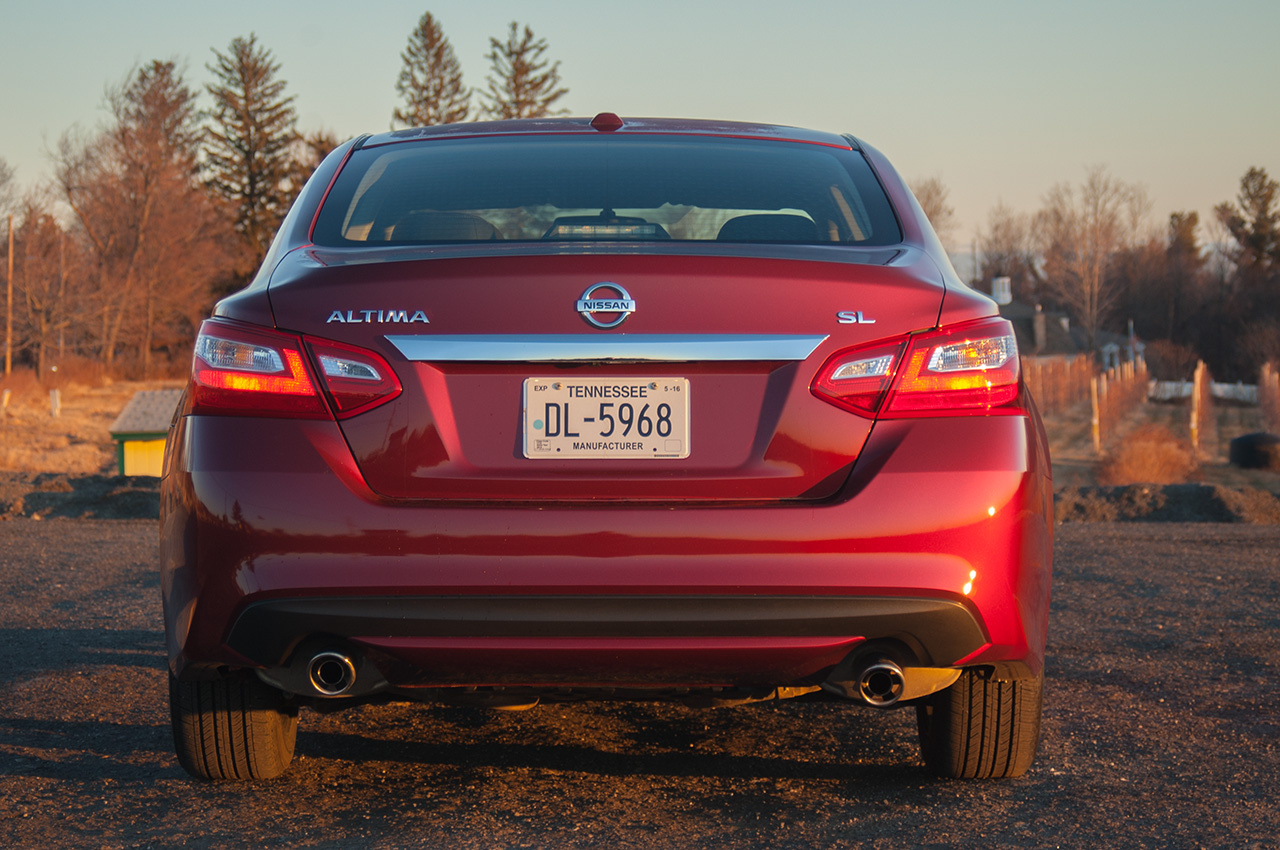 The Altima plays in a very tough sandbox. It’s surrounded by no shortage of excellence, and it can hold its own on several fronts. The MSRP of the 2.5 SL I drove came in right around $33,000, which is a couple thousand dollars less expensive than I thought it would be. For that price, you get a large sedan that returns excellent mileage, has some luxury upgrades, and carries safety technology that was until very recently the domain of very high-dollar premium cars. The proven engine lineup and well-sorted CVT automatic aren’t harboring any nasty surprises for long-term maintenance, either.

It may not be the flashiest car in the field, but it’s one of the most useable, because Nissan has made smart choices balancing styling, technology, and utility. The lack of overall glamor may also be what keeps the Altima’s resale value at just average levels, trailing standouts such as the Subaru Legacy or Toyota Camry. Given the affordable price of entry and high value, though, the Altima offers considerable talent that will quietly perform, year after year.

GuruVKF67 Love it so far, no problems

GuruWSK47 Loved this car - picking mine up today!

Users ranked 2016 Nissan Altima against other cars which they drove/owned. Each ranking was based on 9 categories. Here is the summary of top rankings.

Have you driven a 2016 Nissan Altima?
Rank This Car

My 2016 Altima is experiencing a sporadic delay when accelerating from a stop. It won’t rev or do anything for a couple of seconds no matter how far down the pedal is. Then all of a sudden it’ll...

While driving in turns (not necessarily sharp turns) my steering will randomly lock. (Goes straight while I am attempting to turn). Thankfully, it only lasts a few seconds and releases. I am estimatin...

201 views with 8 answers (last answer about a month ago)

T&K Addison asked a 2016 Nissan Altima 2.5 S Car Selling & Trading In question about a month ago

I Have A Car To Sell ..how To Go About It In Carguru

Reading all of the questions about the rain water leaks, has anybody found a viable solution since the dealership and Nissan Corp is not really doing anything. This car only had 17,000 miles on it ...