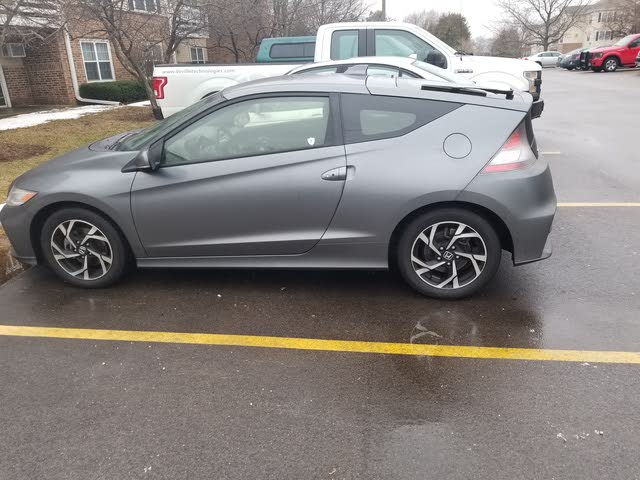 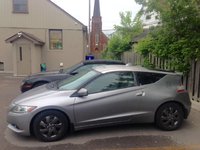 Though it’s not immensely practical, the 2-passenger 2016 Honda CR-Z might nevertheless appeal to those who want a semi-sporty fuel-efficient hybrid commuter with enough toting space for a couple of golf bags or a week’s worth of groceries. This 3-door compact hybrid hatchback comes pretty well equipped in all 3 trims, the LX, EX, and EX-L w/Nav (navigation).

Available only in front-wheel drive (FWD) and sporting a mere 25.1 cubic feet of cargo area behind the two seats, the CR-Z gets a few updates for 2016, including an enhanced suspension, upgraded brakes, and “active sound generation,” which creates an artificial engine note that makes the CR-Z sound more like a normal car than a hybrid. Further improvements for the upcoming year’s CR-Z include redesigned bumpers, LED headlight elements, added exterior color choices, reworked wheel designs, an electronic parking brake, an audio display, Honda’s LaneWatch lane-keeping assistance, and keyless entry and ignition.

The 2016 CR-Z is powered by a 1.5-liter gasoline-fired engine mated to a 15- kilowatt lithium-ion-battery-powered electric motor and a standard 6-speed manual transmission. Look for 130 total hp and 140 lb-ft of torque from the stick-shift version, while a CR-Z equipped with the optional continuously variable transmission (CVT) drops torque figures to 127 lb-ft. There are also 3 driver-selectable settings, Normal, Eco, and Sport, that tweak throttle response, climate-control output, and shift points to suit your mood, while the standard Plus Sport System gives you some extra acceleration as long as the battery is more than 50 percent charged and the vehicle traveling faster than 19 mph. Other drivetrain features include regenerative braking, automatic engine stop/start, and hill-start assist.

EPA mileage estimates for the current CR-Z come in at 31 mpg city/38 highway/34 combined with the manual transmission and 36/39/37 for the CVT.

The National Highway Traffic Safety Administration (NHTSA) gives the current CR-Z 4 out of 5 stars in overall crashworthiness, while the Insurance Institute for Highway Safety (IIHS) awards the CR-Z its highest rating of Good in all safety tests.

Owners of current CR-Z variants are not impressed with this subcompact hatchback’s side and rearward visibility, and the lack of a rear seat doesn't make it all that family-friendly. Owners do, however, laud the CR-Z for its stylish design, heady driving dynamics, and, of course, its excellent fuel economy. Look for the 2016 CR-Z to once again challenge Toyota’s Prius C, Ford’s Fiesta ST, and the normally powered but still efficient MINI Cooper.

Michael Give it 5 stars

Users ranked 2016 Honda CR-Z against other cars which they drove/owned. Each ranking was based on 9 categories. Here is the summary of top rankings.