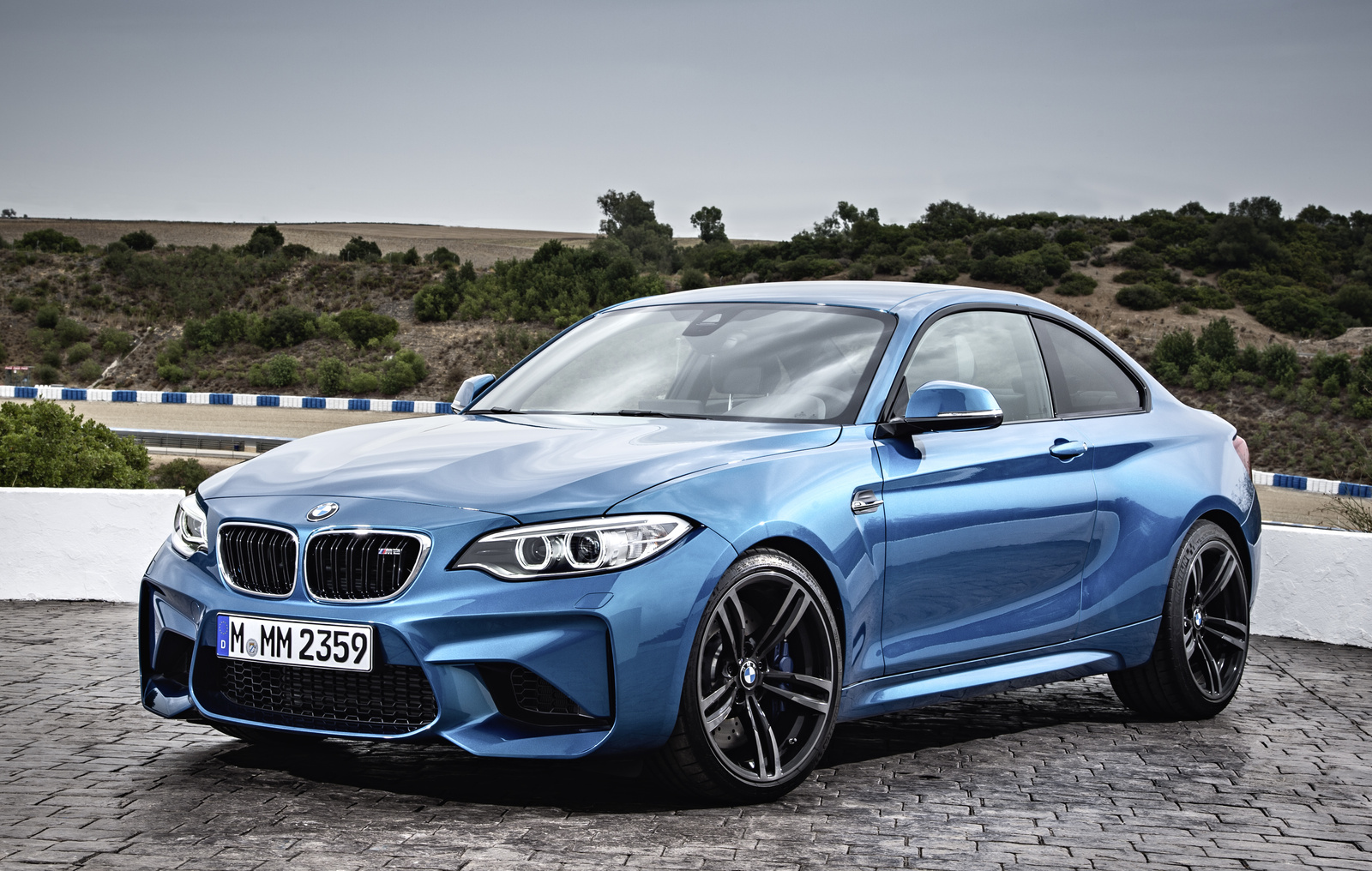 If you pay attention to sports cars or European luxury brands, you’re probably familiar with M, BMW’s Motorsport division. Since 1972, this in-house performance wing has spent time learning lessons on the track and using what it's learned to build fun and engaging performance cars.

In its early years, M was literally taking a 3.5-liter straight 6-cylinder developed for racing and stuffing versions of it into road cars, like the M1 and the first-generation M5. Combined with tight steering and precise suspensions, this engine became the hallmark of BMW M for decades.

But then BMW realized it could sell M versions of SUVs like the X5 and X6, as well as almost every other model in its lineup. These vehicles are certainly exciting, but at 6,000 pounds, with all-wheel drive (AWD) and a V8 engine, they're hardly the M cars that purists love.

That's why the 2016 BMW M2 could not have come at a better time. This fun little runabout packs a serious punch, cramming a potent inline six and sublime gearbox into the small 2 Series Coupe chassis. To get to the bottom of this car, we trekked out to {"id":16,"type":"eLink"}, an incredible and challenging track 90 minutes west of Boston. In the process, the M2 reminded us all why we love the letter M. 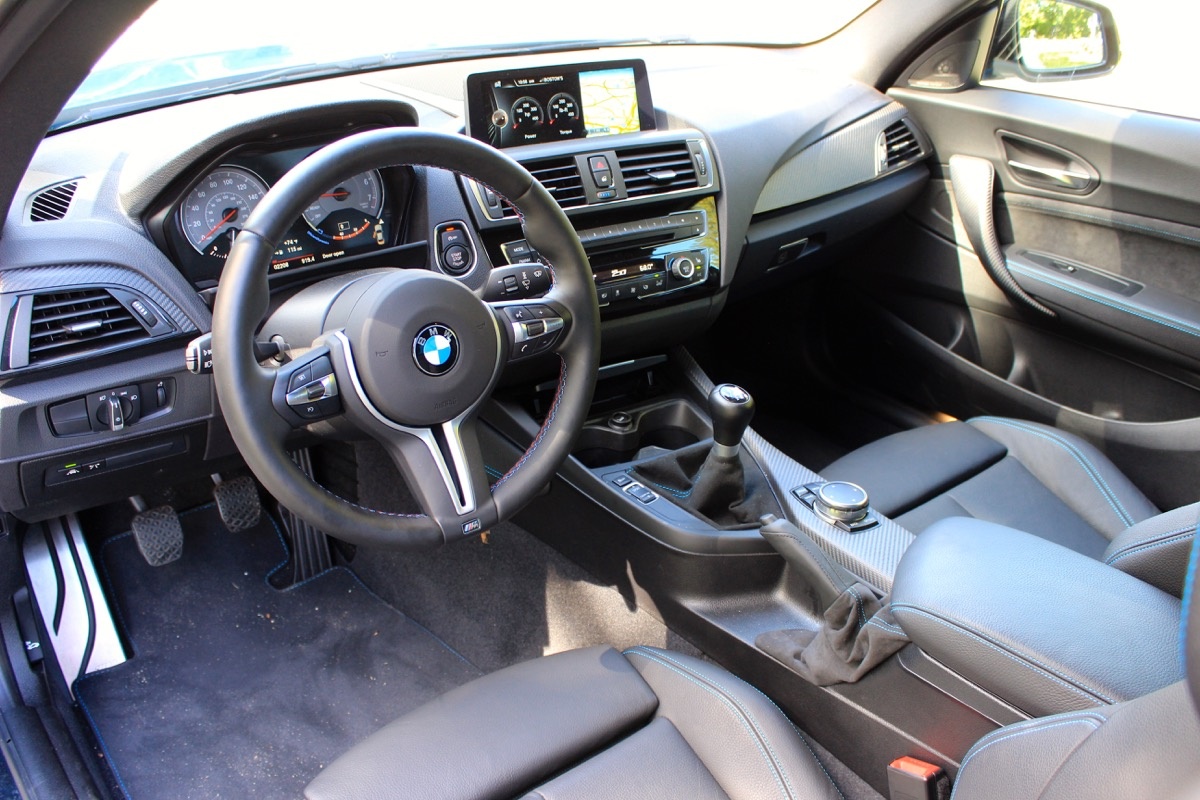 As noted already, the M2 is based on the 2 Series Coupe. The plucky little 2 Series features a short rear deck and a long, sloping hood, and it replaces the BMW 1 Series. As BMW has gone through a name shakeup, with coupes getting even numbers and sedans getting odd numbers, 1 became 2.

The M2 itself replaces the 1 Series M Coupe, a vehicle with a lore all its own. First, the name: The name M1 belongs to the first midengine supercar that started the “M” naming convention back in 1978. It would be sacrilege to name this new car the M1. So clunky name aside, BMW built only 740 M1s, all fitted with a turbocharged inline six and stuffed with the wheels, brakes, and suspension of the M3 sedan.

The new M2 follows that same formula. The M2 comes standard with the 19-inch wheels (9-inch-wide fronts and 10-inch-wide rears) from the M3, wrapped in Michelin Pilot Super Sport tires. Within those wheels are massive ventilated brakes with M-branded calipers.

To make room for that hardware, the M2 features wide fenders that are blended into the rest of the bodywork. But match those fenders with a rear lip spoiler, four exhaust outlets, and revised front bodywork with plenty of vents and flares, and there is no way you’ll confuse the M2 with any non-M 2 Series.

Unlike the flashy exterior, the cabin is aesthetically minimalist and functional. The black-on-black color scheme doesn't distract the eyes, letting them focus on the road outside. The seats feature piping that matches our test car's Long Beach Blue exterior and pops nicely on the all-black leather.

One slightly off detail is the faux-carbon-fiber interior accents. They don’t have a gloss finish, and so feel like plastic wicker to the touch. This detail is found in the center console and along the dash. It’s just a couple of tacky details in an otherwise impressive cabin, and they're meant to hint at the car's performance. 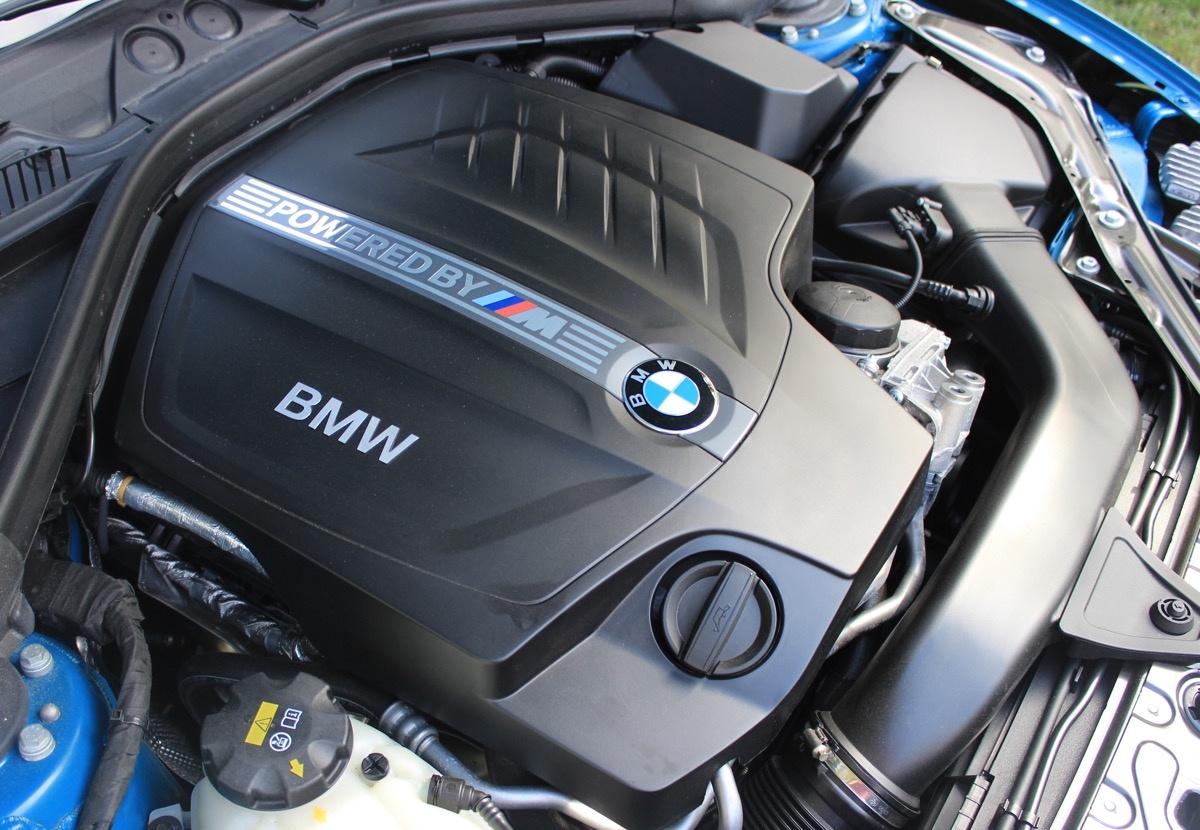 We said straight six engines are a big part of the history of M, and they have long been the go-to application for various M cars. The M2 gets the N55 inline six from the “quasi-M” M235i, but tuned to produce 365 horsepower and 369 pound-feet of torque.

Power gets sent to the rear wheels through either a 6-speed manual or a 7-speed dual-clutch automatic (DCT) gearbox with steering-wheel-mounted paddle shifters. These setups let the roughly 3,500-pound M2 get from 0 to 60 mph in just 4.3 seconds with the manual and 4.1 seconds with the DCT. As for fuel economy, the manual gets estimated at 18 mpg city, 26 highway, 21 combined, while the DCT puts up numbers of 20 city, 27 highway, 23 combined.

But acceleration is only part of the story, as any good M vehicle should go around a corner as well as it travels in a straight line. To that end, the M2 is fitted with many suspension and performance chassis components from its larger siblings, the M3 and M4. It also features variable-feedback electronic-assisted power steering and the computer-controlled M differential, which can be controlled via the drive-mode selector and has Comfort, Sport, and Sport+ settings.

The Comfort setting softens the suspension, steering feedback, and throttle response. It also eases up the baffles for the M performance exhaust. Put it in Sport, and all those settings tighten and the M exhaust opens up, allowing for an unreal sound at the rear, with incredible crackles and burbles.

The manual transmission also has something called “rev matching.” On the track, as you enter a turn, you ideally want to downshift, brake, and turn in one fluid motion, but trying to do them all at the same time can create unbalanced braking, which can put the car in a tricky place as you enter the turn. Racing drivers will often “heel-toe” and “blip” the throttle with the side of their right foot while that same foot is also on the brake pedal. That blip allows a driver to downshift smoothly for even braking into the turn.

The M2 actually performs that “blip” for you, and that extra move makes executing corners on a track much easier. Palmer Motorsports Park was an ideal place to put that to the test, as the 2.3-mile track features 15 turns of varying difficulty and a whopping 190 feet of elevation change. You simply need to point the car at marked braking zones and perform your downshifts as you work toward the apex.

The M2's performance features make the car incredibly fun to drive and can turn a good driver into a hero on the track. It’s almost like driving a sports car in a video game with cheat codes activated. The M2's electric steering is not as natural as the hydraulic units in older M cars, but it is precise. The engine has plenty of power and torque, and it likes to be revved high on the track, like an older inline six or even an inline four.

Off the track and on the highway, the M2's gearing is tight to the point that it can cruise on the highway with the tachometer reading 3,000 RPM, which is awfully high. But that’s the cost for its great shifting on the track. 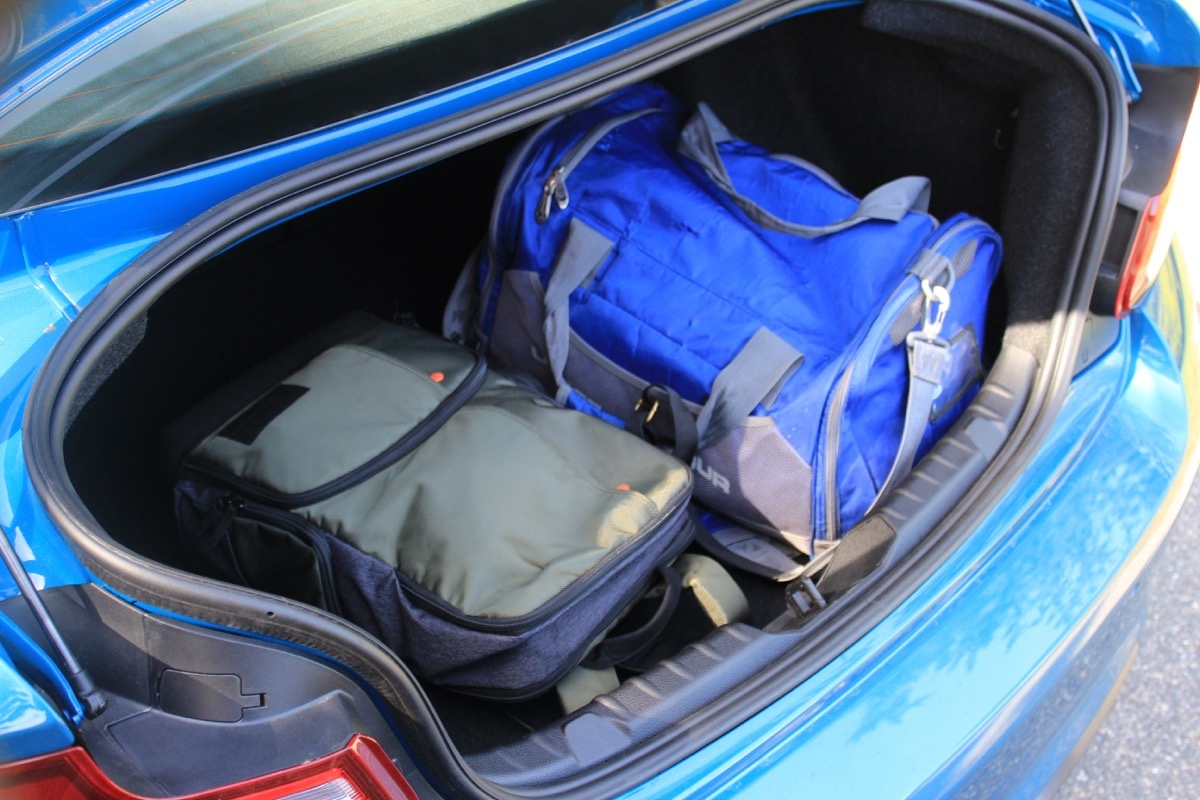 Each door has two cupholders and cubbies built into it, which is rather comprehensive for a small German car. The center console isn’t that large, but features two large cupholders at the front as well as a small bin for your keys and wallet.

The rear seats are not large, but they are serviceable, and BMW doesn’t get overzealous with seating. A small tray console sits in the middle of the rear seat instead of room for a third person, capping seating capacity at 4. Access to the rear seat is made easier with quick-flip front seats with power-slide buttons at the top, so rear passengers can easily let themselves out.

Trunk space is ample for a vehicle this size at 13.8 cubic feet, which is actually more than the M4 and M3 offer, at 11 and 12 cubic feet respectively. All told, the M2 is a great car for 2 or 3 people on a long weekend trip with all their gear.

One other great feature is the hood release, which simply requires a double-pull from within the car. That means you won’t need to shove your hands into a hot engine bay to look for a secondary hood release. 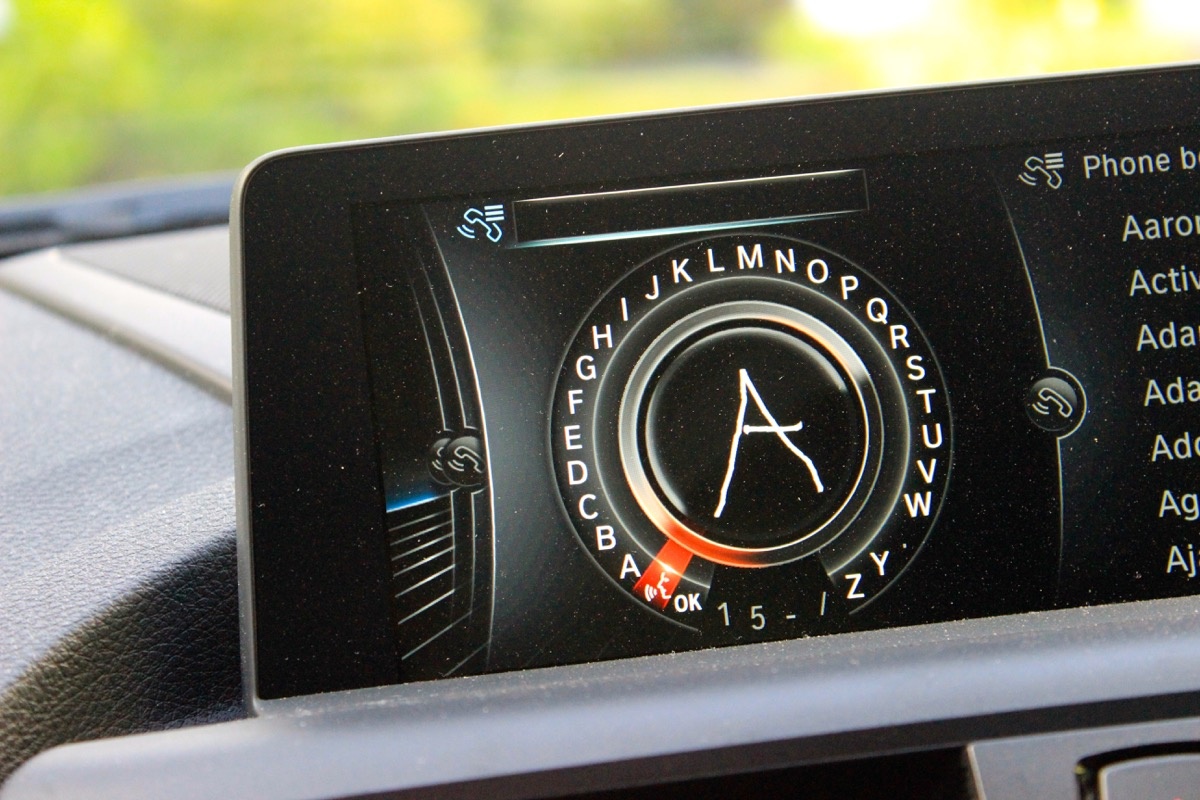 The M2 comes loaded with BMW’s infotainment system, iDrive. It centers around a large, vivid digital color screen and a dial controller mounted on the center console. You can go to various menus, including phone, radio, navigation, and settings controls, using either redundant buttons or the large rotary dial. The rotary dial holds another secret—it doubles as a touchpad with gesture recognition. When entering a contact name or address, you can “draw” letters on top rather than turning the dial to select a letter.

For a once-maligned system, iDrive now features pretty easy navigation for functions like saving and selecting stations, which can often be a pain in more complicated systems. You can also set iDrive up for a dual-screen view, so you can have navigation on one half and the radio or performance readouts on the the other side.

And when all else fails, the voice-control system is really great, as it understands complex inputs. You can say an entire address to start navigation, just like you would say an address to a friend on the phone. 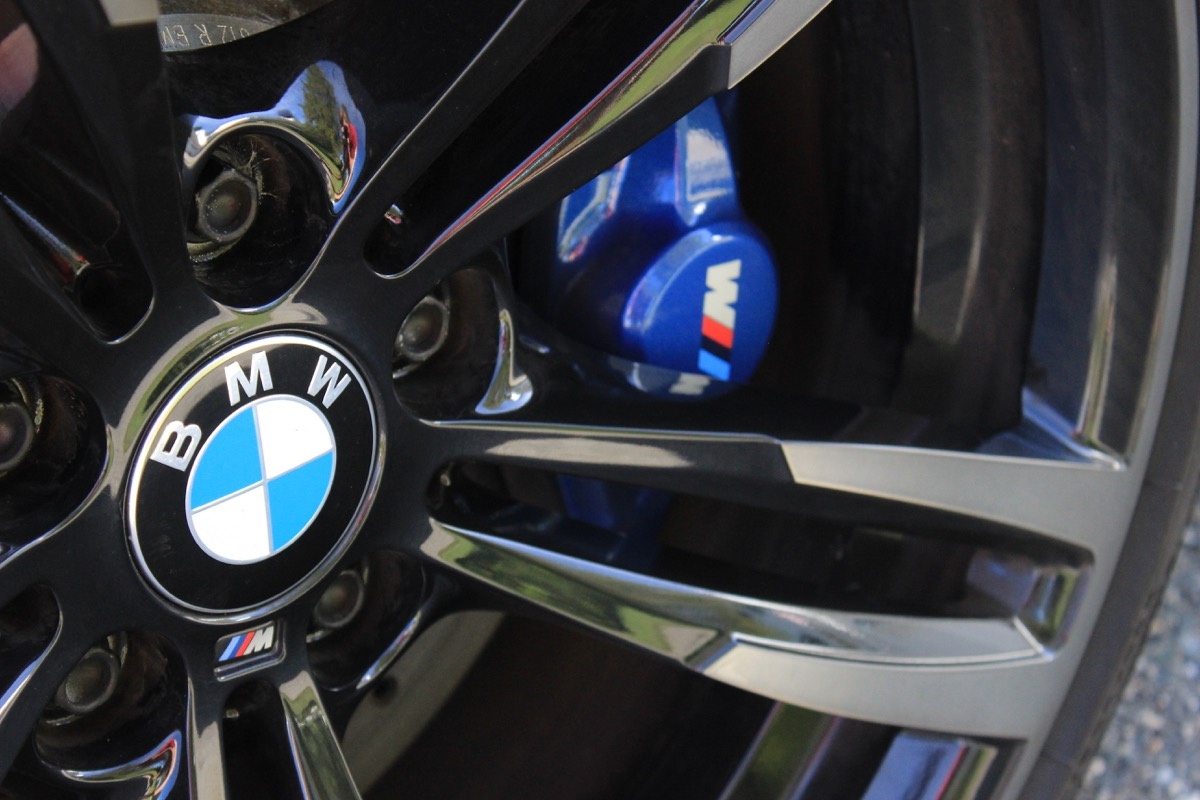 The M2 comes standard with the full complement of front and side impact airbags, as well as BMW Assist eCall, which automatically calls emergency responders in the event of a crash.

Avid performance drivers are often more aware of road conditions than the average commuter, but the M2's available systems will help any driver stay alert to the car's surroundings and environment. 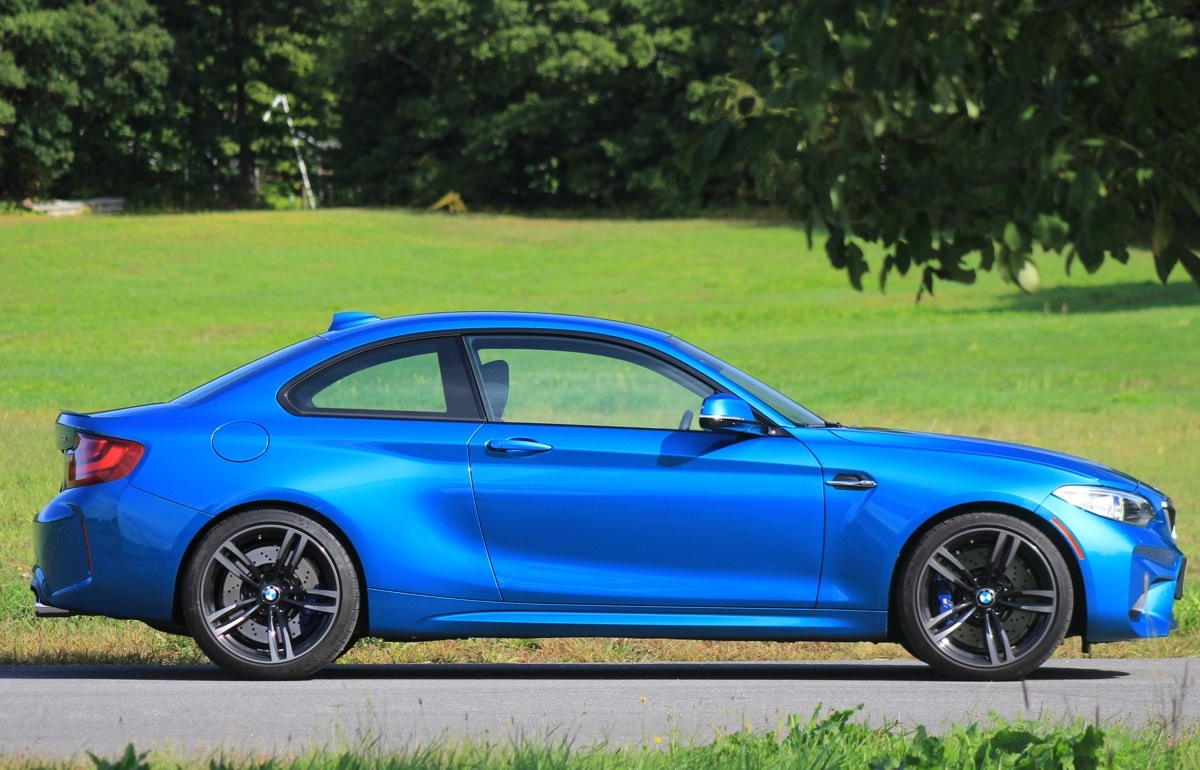 The 2016 BMW M2 starts at $51,700, and our test version came with the Executive Package. This $1,250 option included the rear-view camera and advanced safety technology as well as automatic high beams and a heated steering wheel. This all put the sticker price of our test model at $54,495.

That might seem like a lot for a small performance car. At that price, the M2 costs more than the Volkswagen Golf R, which has less power but offers AWD and comes in at around $35,000. A Camaro SS starts at under $37,000, and in the M2's near-$55,000 price range, you could even get a Corvette Stingray.

But the M2 will never be compared to those cars. For certain performance enthusiasts, the M2 marks the return of everything that has left the M brand, and those who care about the brand will probably buy one—and compare it to every M3 and 1 Series M that came before it.

In that sense, the M2 is the true heir apparent to BMW's M crown. As we found at Palmer Motorsport Park, the M2 is the most fun you can have in a BMW today, and it's easily the best M car available right now.

grxtn All sounds great, but what about that 3000 rpm at hi-way speed? What are the speeds at particular gears? I don't want to travel at such a high rpm!

Northline motors has several cars advertised. They are unscrupulous and will give your service a bad name. Is this the correct way to repair a flex pipe?

Does The Latest BMW M2 Have A Active Launch Control System?