Looking for a Used Q3 in your area?

Audi’s littlest SUV delivers the same rock-like quality of its bigger siblings, with nimble handling and a quiet interior. But you don't get much else. 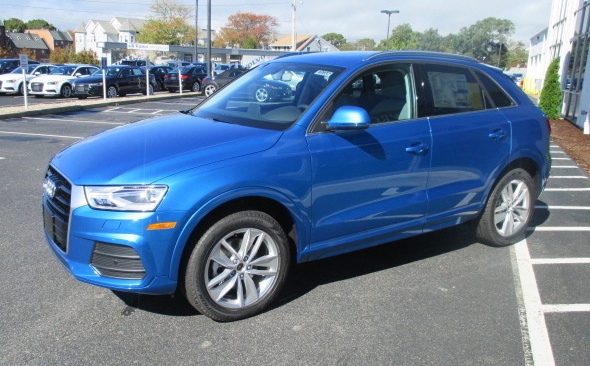 Compact crossovers and SUVs are among the nation's hottest-selling vehicles, and that means plenty of choices. Audi's latest is the Q3, which slots below the compact Q5 and the three-row Q7. There's a substantial discount between the Q3 and Q5, too, which may entice Audi buyers looking to cut their car payments. 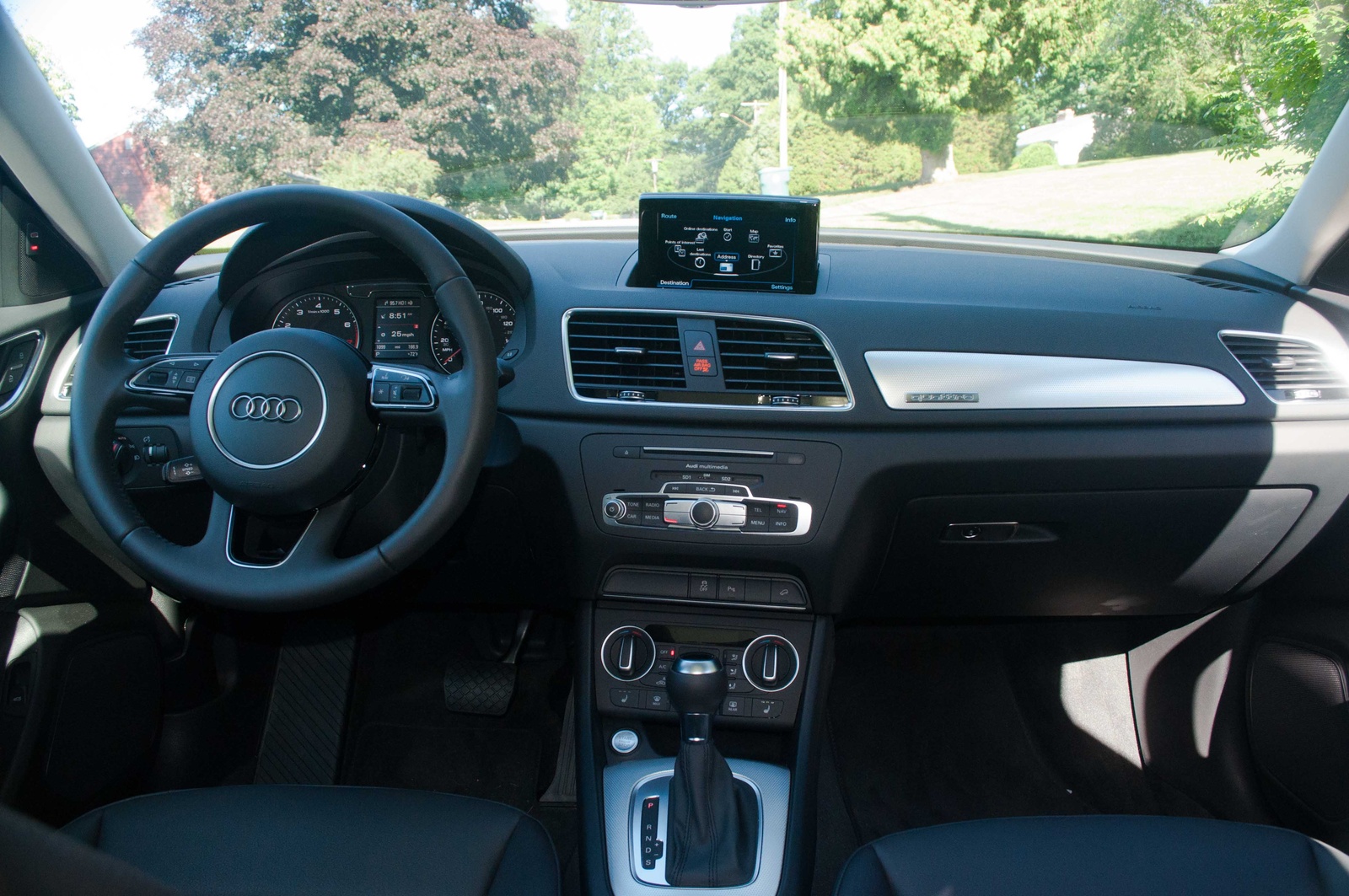 Audi’s flat, rectilinear style makes one generation nearly indistinguishable from the next, which can elicit two responses: You never feel like you’re in an old car, or gee, this is all a bit boring. We fall somewhere in the middle with most Audis, and the Q3 is no exception. For 2016, Audi brings a mild exterior refresh after just one model year in the U.S. (it had been available in Europe since late 2011). All told, it’s clean and citified for buyers who find the compact Q5 too expensive or too large. But it errs by being boring.

Our car stood out in Utopia Blue, and the standard panoramic moonroof brightened the all-black interior (we’d recommend the gray contrasting leather seats, door panels, and lower dash trim to lighten the otherwise stoic mood). Without the Audi badges, you could mistake a Q3 for a Volkswagen Tiguan (the chassis is based partially on that model) or any number of small SUVs. Inside, our $40,300 Premium Plus tester felt like a basic European rental car, and an aged one at that despite high-quality switchgear, materials, and finish. None of Audi’s expressive interior designs have made it to the Q3. 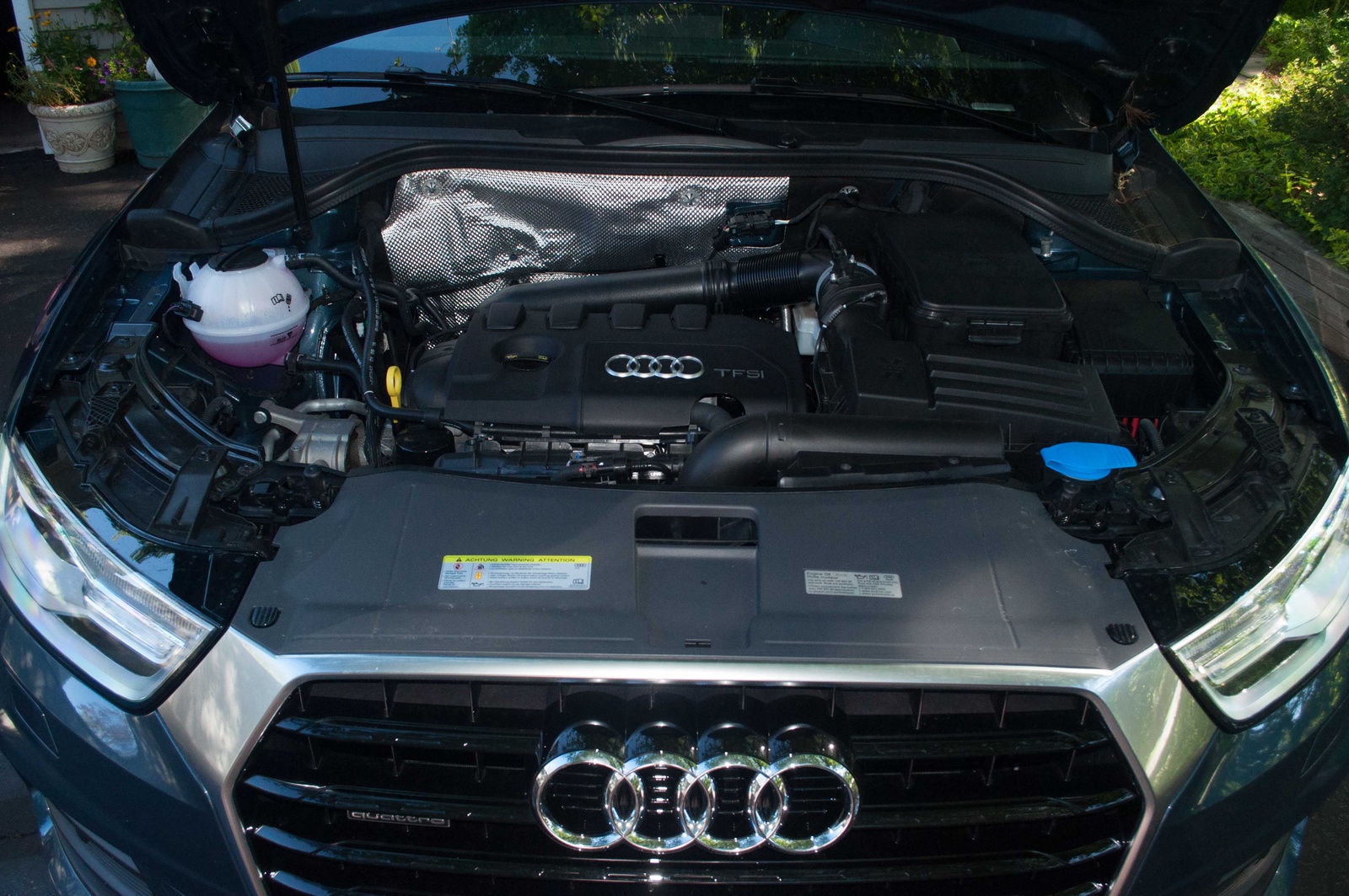 The Volkswagen Group’s 2.0-liter turbocharged 4-cylinder has served many a Golf and A4, and the latest version continues to deliver impressive response and refinement. At 200 hp, it’s got less power than a BMW X1 or a Mercedes GLA, yet it has minimal lag and the gearing from the 6-speed automatic helps it launch quickly and smoothly. A few more gears would help fuel economy, as we mustered only 23 mpg (it’s EPA-rated at 20 mpg city/28 highway). Otherwise, the steering is lively and direct, with only moderate body roll and a hushed, isolated ride worthy of the Audi nameplate. The brakes are good in both pedal feel and stopping power.

A few dealers may stock the front-wheel-drive Q3 in warmer states, but elsewhere, you’ll find only quattro, which is one of the longest-running (and best-performing) all-wheel-drive (AWD) systems in the industry. The Q3 drives like the sprightly, lightweight crossover it is, and somehow manages to feel a class above on long highway cruises. 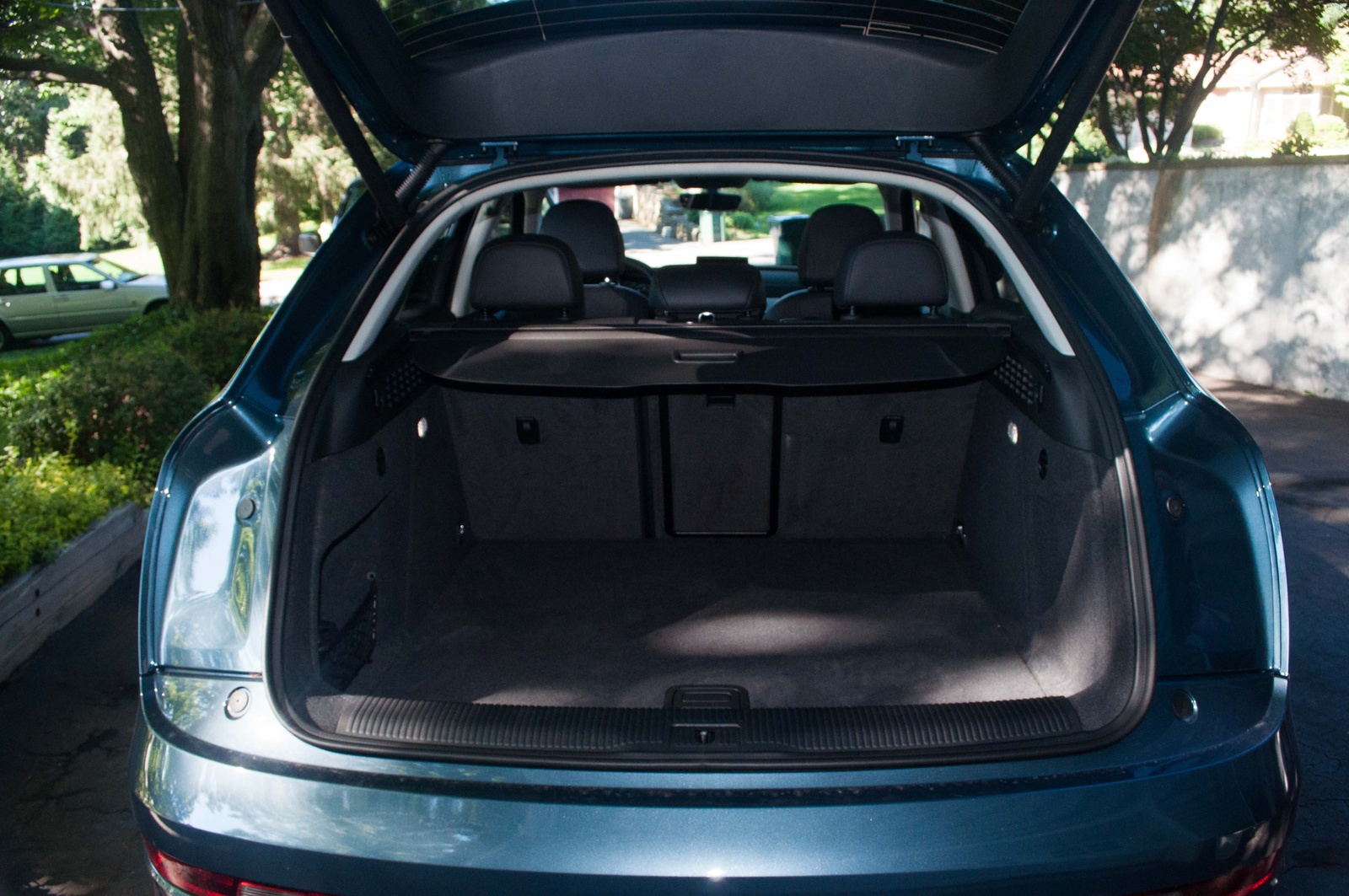 The Q3 may be dated, but at least it’s well-designed. The climate and radio controls are regular knobs and buttons, and the PRNDL shifter doesn’t try reinventing itself into some fussy rotary knob or T-shaped handle. The MMI infotainment system is easier to use than that of most Audi models, since the controls are on the center stack instead of between the seats. The screen is small and juts out from the top of the dash, which adds to the Q3’s cheap appearance (and while it might appear to fold flat, it doesn’t). The seats don’t offer much side support, although optional sport seats can better counter g-forces. The central screen on the instrument panel is also small, though as with everything inside the Q3, it’s legible and easy to grab on the go. Most new luxury cars complicate the simple things—like changing a radio station—and drive us mad. 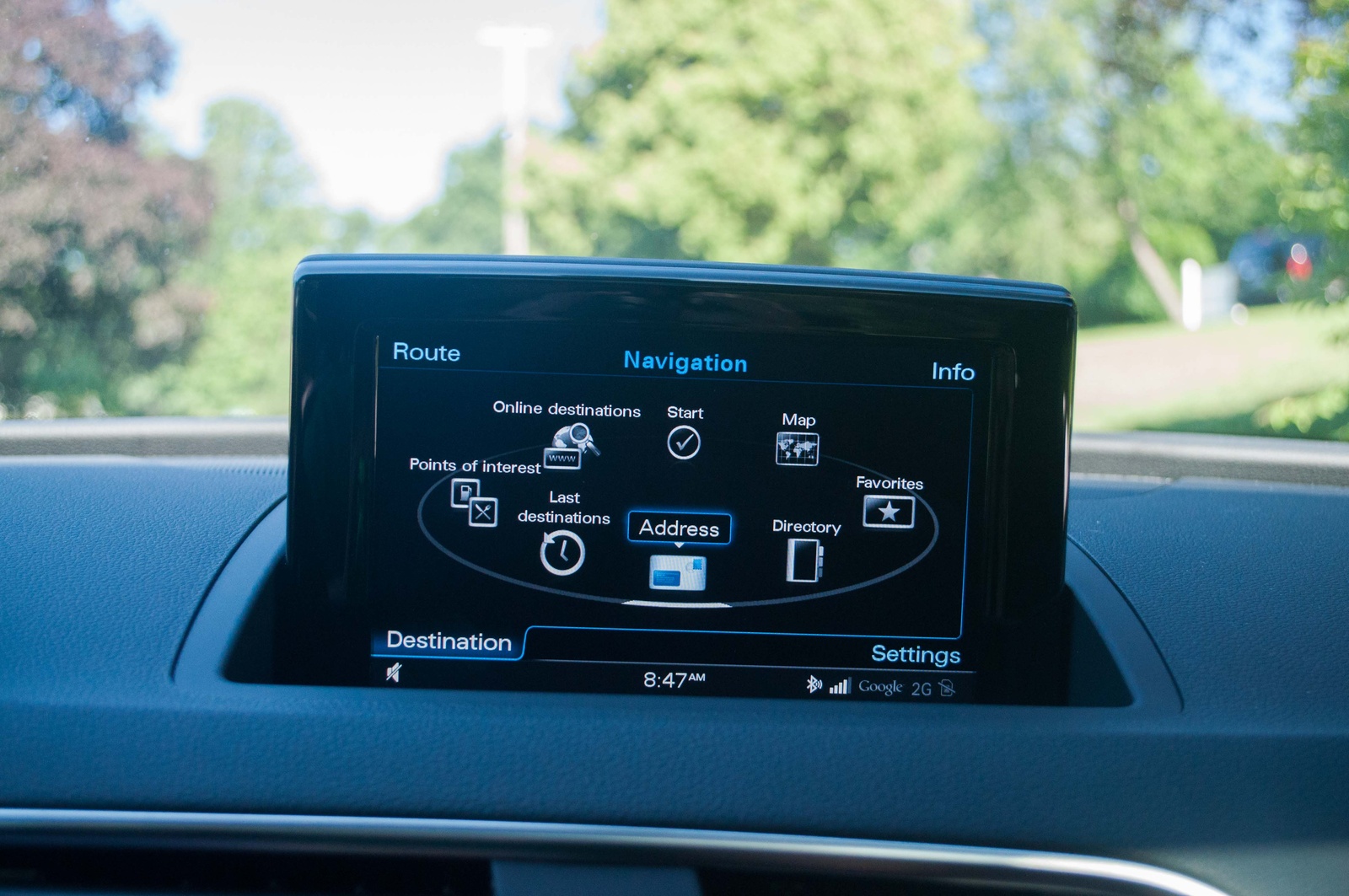 Without the Technology package ($2,600), there’s not much happening at all inside the Q3. Even the instrument panel display is monochrome. This package brings navigation with traffic overlays and Audi Connect, a cellular-based data service that allows Google Earth topography and 3-D cities, onboard Wi-Fi, local fuel prices, parking info, and weather. Blind-spot monitoring and a color display are also included. At least xenon headlamps, 12-way heated power front seats, that panoramic moonroof, and push-button start with keyless entry are standard. The Prestige trim includes the Technology package and our car’s $400 power tailgate, along with larger 19-inch wheels, LED headlamps, and a 14-speaker Bose stereo. But there’s no USB slot—only Audi’s proprietary iPod-only connector—and no telematics services or other advanced driver assists like adaptive cruise control. The standard stereo is subpar. 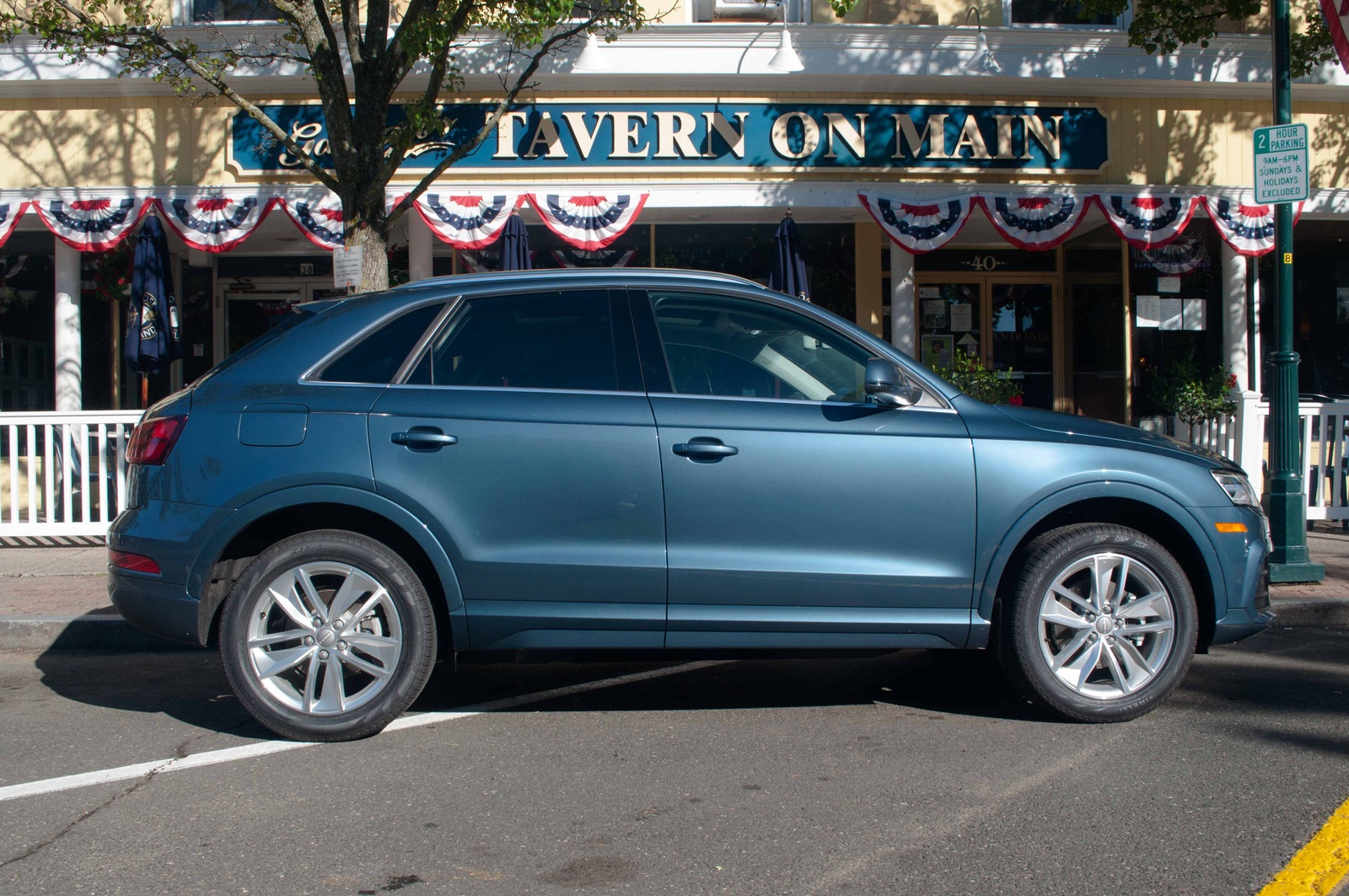 The 2016 Q3 is a 2015 Top Safety Pick as rated by the Insurance Institute for Highway Safety and scored the top Good rating in all five crash tests. It no longer qualifies for 2016, because the Q3 offers no collision warning system. The Q3 is not rated by the National Highway Traffic Safety Administration. It also does not have any knee airbags, which many luxury cars (and some non-luxury cars) offer. 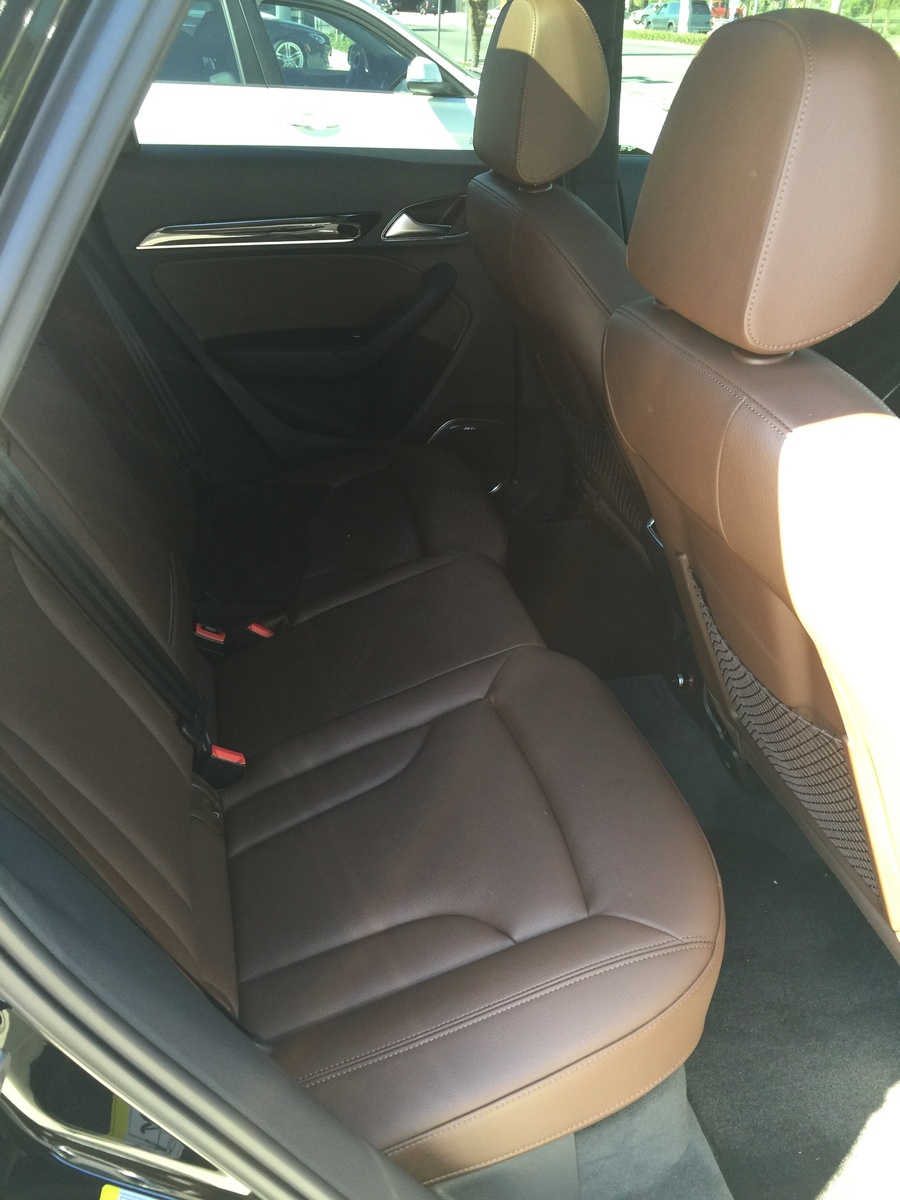 We can’t recommend the Q3 unless both the size of your parking space and the vehicle’s grille emblem take precedence over everything else. Indeed, when similarly equipped, a Q3 is about $7,000 less than a Q5, and for some buyers, that’s all that matters. But in nearly every category, from space to comfort, from design to luxury features, the Q3 offers no real justification over a loaded Volkswagen Tiguan—or indeed, a top-end Jeep Cherokee or Ford Escape that sell for even less. The electronics and interior design need updating, and it’s not enough to think the Audi badge will sell itself. The competition, including from Audi’s own lineup, is more compelling.

Users ranked 2016 Audi Q3 against other cars which they drove/owned. Each ranking was based on 9 categories. Here is the summary of top rankings.

Looking for a Used Q3 in your area?

How Do I Reach The Owners Of These Cars?