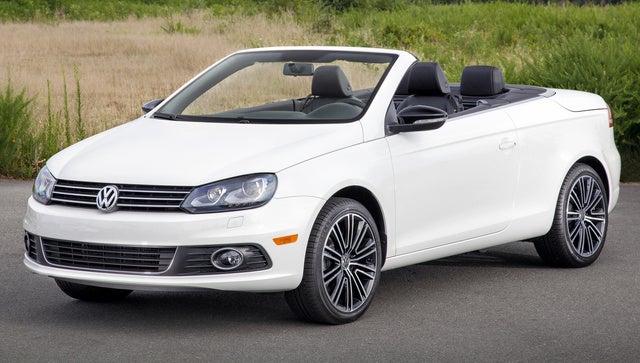 It's official: Volkswagen will let the current Eos run out of stock, and no more will be produced. That means the popular Sport is already all gone, leaving just the familiar baseline Komfort and top-shelf Executive trims to buddy up with a mysterious Final trim, apparently outfitted precisely the same way as a Komfort with but a few exclusive cues.

The Eos was always a bit of an odd character, and as this move turns out, a bit too odd for this market. Ticketed as an upscale droptop, its cushy ride never quite translated to drivers as something that meshed well with that idea. Or at least it never translated into sales for its target demographic, and it ended up quite the favorite among older sun worshippers for its comfortably steady ways.

That's not a bad thing unless you were aiming for a larger, more youthful market, but came to the pitcher's mound with 50 Cent's aim. The Eos may not go down in history as the worst ceremonial opening pitch of all time, but it's definitely Volkswagen's worst flop of all time, according to Volkswagen. Drivers have a different opinion, however.

Much like 50 Cent's opening ceremonies made for great entertainment, the Eos is a born 4-seat pleaser with the industry's first-ever sun/moonroof droptop. It's quick enough for a compact convertible, rated at 7 seconds to 60 mph, but buyers in this price range have far more engaging rides to choose from with swifter response times—and that was its downfall. The Eos went the distance, but never quite made it over the plate for most open-air thrill seekers, having very little thrill to offer beyond a well-shaped cabin breeze.

As such, the 2015 Eos is the very same as the 2014 Eos as it rides off into the sunset, with 10 cubic feet of trunk capacity and all. The engine still gets a fairly decent 22 mpg city/30 highway fuel estimate with its 200 hp and 207 lb-ft/torque 2-liter turbo 4-banger, still directed by a 6-speed automated manual. The top drops with the push of a button in 25 seconds, but leaving it up results in a serene cabin that was once the industry's benchmark. There are quieter convertibles on the market today, but they still cost more.

Continuing in that premium vein, standard features for the baseline Komfort include heated mirrors, heated windshield-washer nozzles, a wind deflector, keyless entry, heated 8-way powered seats with lumbar support and a touchscreen interface for the 8-speaker stereo with iPod, HD, satellite radio and Bluetooth connectivity with a CD player. Moving up the trim ladder opens up a few exclusive option packages, but otherwise most anything optional is available to every trim.

What's your take on the 2015 Volkswagen Eos?

Users ranked 2015 Volkswagen Eos against other cars which they drove/owned. Each ranking was based on 9 categories. Here is the summary of top rankings.

Have you driven a 2015 Volkswagen Eos?
Rank This Car

I recently changed to fully synthetic oil, and now the oil light keeps coming on when I am driving slowly, my only thoughts are it is so thin that the pump isn't registering or pumping a sufficient...

What Is SULEV Option On Volks. Eos

Do Sellers In Florida Have To Disclose Storm/water Damage On Their Vehicles...