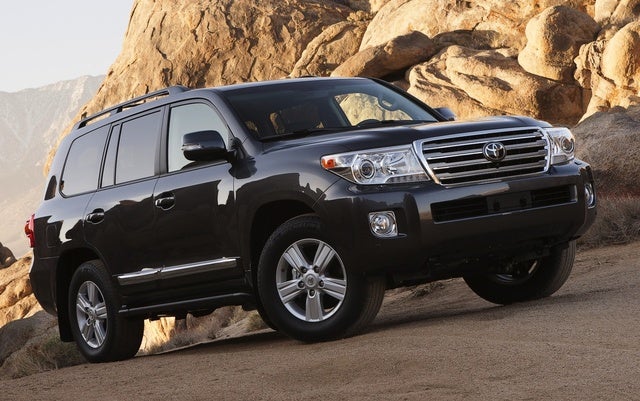 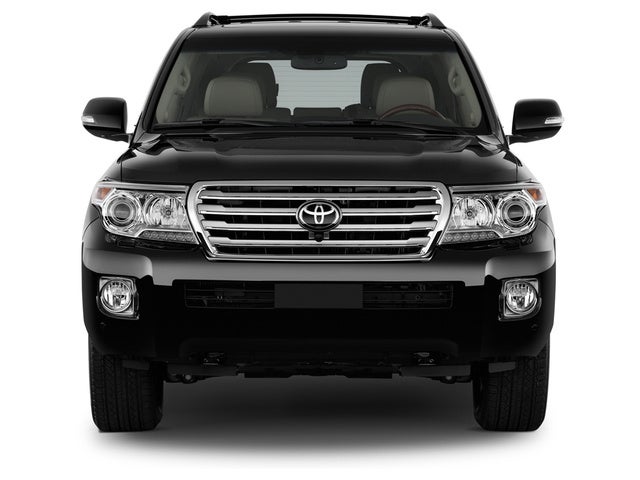 Alas, also returning in the 2015 Land Cruiser is a super-hefty MSRP, not to mention abysmal gas mileage and a choppy ride on asphalt that isn’t helped by loose steering and top-heavy handling. This heavy hauler’s main rivals, meanwhile, include Toyota’s own (and much cheaper) Sequoia, Lexus’s LX 570 and, of course, Land Rover’s legendary Range Rover.

As mentioned, the 2015 Land Cruiser returns powered by a 5.7-liter V8 engine that combines with the traditional 6-speed shiftable automatic transmission for 381 hp and 401 lb-ft of torque. Towing remains maxed out at 8,200 pounds with the delivered trailer-towing equipment, while EPA-estimated mileage returns at a wallet-whacking 13 mpg city/18 highway.

In any case, regarding the 4WD system, the 2015 Land Cruiser packs a traditional 2-speed transfer case, locking limited-slip center differential and auto-locking hubs. It then adds to the usual setup with an off-road-tuned hydraulic suspension, VGRS optimized steering response, Multi-Terrain Monitoring and Multi-Terrain Select, whereby the driver can select from one of 4 terrain-taming traction modes: Rock, Rock & Dirt, Loose Rock and Mud & Sand. Yeah, that’s why this trail-blazing Toyota gets the nod when the going gets tough.

But all is not rock climbing and river-bed roaming with this tough-guy Toyota. Returning standard appearance goodies include 18-inch alloy wheels, side steps, a power moonroof, skid plates, a trailer hitch and wiring, a rear spoiler and a roof rack. Inside, things get truly decadent with stuff like leather upholstery, heated power-adjustable front seats, reclining second-row seats, memory for driver’s settings and full power accessories. Adaptive cruise control with front-collision mitigation braking also returns, as do telescoping tilt-wheel steering, a remote garage door opener, front-, rear- and side-view cameras, front and rear parking sensors and an auto-dimming rear-view mirror. All of this, meantime, is complemented by leather, simulated wood and simulated alloy cabin accents.

As mentioned, a bunch of options had, as of 2014, been incorporated into this big ute’s standard equipment, leaving only such notable accessories as remote engine start and a glass-breakage sensor to be added-on at extra cost.

What's your take on the 2015 Toyota Land Cruiser?

GuruT43JK There isn't much to compare to the Land Cruiser. The LX, of course, but that is simply a choice between looks (Lexus is more feminine), towing (8200 lbs LC vs 7000 LX), and, I suppose, prestige. But I'm guessing people who want a Land Cruiser aren't buying a Lexus. What you get is one of the best built vehicles in history. Those who compare the Land Cruiser to the more comfortable Range Rover simply don't care about build or reliability. It compares the most reliable vehicle ever built to a Range Rover that typically isn't reliable. Anecdotally, a friend of mine finally got rid of his Range Rover that he grew to hate because of electrical and other problems. Same with the Infiniti. The Infiniti is better than the Range Rover but not in the class of the Land Cruiser. And then you have the Escalade/Suburban. On paper they have more space and more bling but buyers of the Land Cruiser aren't looking for 22" chrome wheels and rattles. I actually like the fact that it is smaller than the Escalade or your typical minivan. It's about the perfect car that can do anything, lasts forever, and is understated.

Have you driven a 2015 Toyota Land Cruiser?
Rank This Car

How much does it cost to transfer and registrate a second hand vechile to your name.

For All Of You Land Cruiser Owners. Are They Worth The Entry Price? I Am Lo...