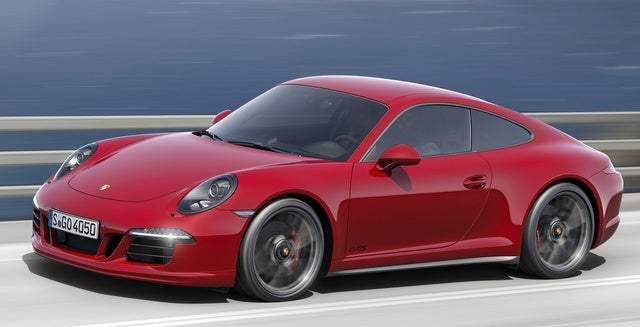 Average user score
4.3 ⁄ 5 stars
Based on 24 reviews
Review by Grant — The 911 is a marque like no other. I have driven high end Audis, BMWs, Mercedes but nothing compares to a 911 as a drivers car. The build quality, ride, precision handling are like no other. A true sp... Read more
Review by agent5150 — There is no other like 911. Audi R8 is probably a close 2nd if not equal :) Read more
Review by GuruXMBCY — excellent car great handling and speed. A delight to own Read more 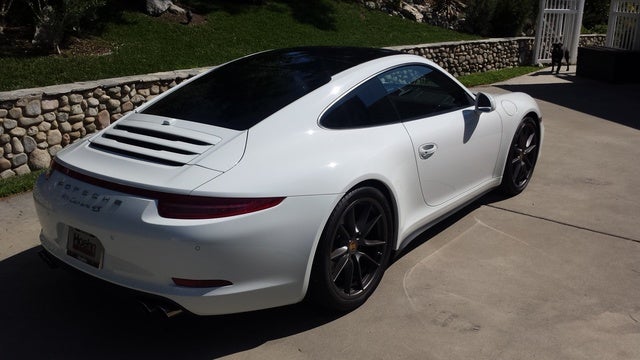 With the 911, a mid-cycle refresh can have nearly as much aesthetic impact as a generational shift, leaving the uninitiated wondering what exactly has changed. With more than 20 trims looming over the 911 name, adding more to the mix can lead to a weariness matched only by politics and fashion. Last year was a strong exception, as the Targa trim came rushing back to the present, carrying just the right amount of nostalgic baggage wrapped around that gorgeous B-pillar. But for 2015 the 911 falls back on old habits and makes only minor changes to the familiar shape.

There were many rumors floating around hinting we’d see a hybrid version of the 911 for 2015—a vehicle utilizing everything learned from the 918 to produce a more powerful, more efficient 911. But no such animal will appear in showrooms this year. Instead we’ll get some reworked bumpers and new taillights masquerading as a “refresh.” Engines will be massaged to comply with new European emissions regulations, and the GTS is rumored to return with another power bump in order to keep it firmly atop the Carrera 4S—likely to land at around 425 hp with some speculating upward of 440. And while some worried that a new turbo flat-4 would make its way into the 911’s bay, this has proven to be nothing more than speculation, likely an application more suited for the Boxster/Cayman family in years to come.

Instead, the least powerful 911—the Carrera—starts with a 350-hp, 3.4-liter flat-6 delivering 287 lb-ft and pushing the rear-engined icon to 60 mph in just 4.6 seconds. It only gets faster from here. The Carrera S gets a 3.8-liter engine good for 400 hp, 325 lb-ft and a sprint to 60 in 4.3 seconds. If you want all-wheel drive (AWD) , the 4S will satisfy and give up nothing in terms of speed. The same set is available for the Cabriolet and Targa versions, although the Targa is available only in AWD configuration. For more power you’ll have to look to forced induction in the form of the venerable turbo—technology Porsche has been fitting the 911 with since 1973. Back then, Porsche passed over natural aspiration in order to bump the 3.0-liter flat-6 from 200 hp up to a then-shocking 260 hp, albeit shocking more for manner of delivery than from an outright power perspective. Today, even the lowliest Turbo 911 will hand over 520 hp and 487 lb-ft of torque, capable of being briefly bumped to 524 lb-ft with the overboost function in the standard Sport Chrono Package. And for those with no shame about their overcompensation, the Turbo S offers 560 hp and 516 lb-ft of torque, with an available overboost of 553 lb-ft. Porsche claims that when overboosted the Turbo and Turbo S will hit 60 in 3.2 and 2.9 seconds respectively, but real-world testing has proven to shave a few tenths off both, which officially moves trap times from “I need a change of shorts” to “Please notify my next of kin.” Just to confuse the issue there’s also the 475-hp GT3, and while it sports what has been called the most communicative steering setup of the entire 911 line, it comes solely with the 7-speed PDK automatic, so keep moving if you like to row your own.

All trims get redesigned front bumpers with slim LED running lights and modulating vents to help with aerodynamics at speed, as well as new rear bumpers with larger tail lights that recall the Macan treatment. Look closely and you’ll also notice some extra vents sitting behind the rear wheels, strategically placed to feed even more cool air to those heavy-breathing turbos.

With any car that inspires as strong a following as the 911, there will always be complaints. Some come from a love of tradition, such as the backlash against water cooling. Some come from preference, such as the backlash against e-steering. Some even come from logic, such as the absurdity of offering a 911 without a manual transmission. My big complaint comes from all three: Why isn’t a deep, lush green offered so I can get the Targa of my dreams? But if you really want to hear the purists scream, wait until the hybrid finally shows up. Best to start bracing yourself now.

Users ranked 2015 Porsche 911 against other cars which they drove/owned. Each ranking was based on 9 categories. Here is the summary of top rankings.

Why Are You Requesting A Verification Photo

why are you requesting this verification? It is strange, and requires more of my time. The car is located in a small garage. I will not be able to take a full image, to your exact specs.

Why Does The Carfax Show A Accident And CarGuru's Doesn't ?

Simply Put a Carfax Report shows an accident in 2015, yet you all aren't reflecting it on your Main Page WHY ?!?!? Dealer was asked and they were aware of it but state they could not find out how s...

I wrapped my car in a wrapping garage when i took my car and left the garage the car was fine but after 30 minutes the car overheated and all the water went out of the car when i checked the cover ...

I went thru the steps of listing my car this morning on your site. I was given a note to wait for e-mail confirmation. I still have no reply. Please reply to jmeehan@Novusllc.com

Will Snow Tires Help Me?

I drive a 911 and it's my only car presently. I recently ordered an Audi to be my winter car. But I just read in an email that my car won't arrive until after the new year. Will a set of snow tir...