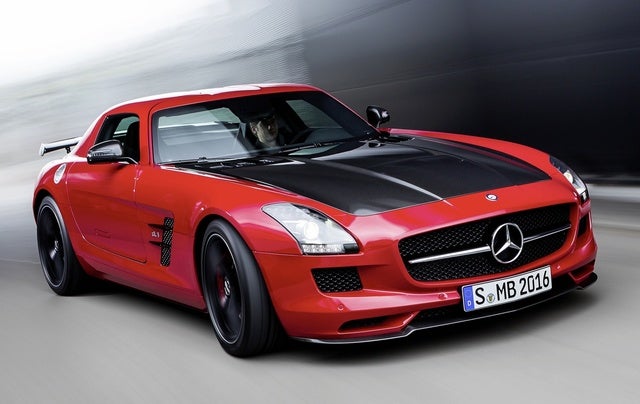 The gull-wing Mercedes will get a swan song in the SLS AMG GT Final Edition. Of course if you decide to go with the roadster version, you’ll forgo the divisive gull wings altogether, but they’ll be there in spirit still. With the 6-year run of this sole AMG to be designed exclusively in-house coming to a quick close, Mercedes-Benz is saying goodbye with a lot of carbon and Alcantara slapped around its tire-shredding supercar with a special 350-unit run.

The 6.2-liter V8 powering the Final Edition has been leaving skid marks on streets and seats since it was first developed by AMG back in 2006. But that was the tame version of this monster mill. Marketed as a 6.3-liter to commemorate the 1963 M100 engine it was inspired by, its 6.208 liters presented buyers with 518 hp and 465 lb-ft of torque in its first applications. For the SLS, however, this wasn’t quite enough, so they fitted it with a dry-sump, new intake and a hardier top end to throttle 583 hp and 479 lb-ft of torque from the naturally aspirated beast. Sadly, it’ll be all turbo from here forward.

But before the turbos force themselves into our aspirations, we’ll have one more (albeit slim) chance to enjoy the excess of the 6.2-liter engine. The Final Edition takes the already garish AMG SLS and adds a bit more pizazz, at least to the aesthetics. Outside you’ll find a carbon front splitter and fixed rear wing, unique air inlets in the front bumper and staggered 19- and 20-inch forged wheels you can get only on the Final Edition. There’s also a “carbon-fiber-effect” hood (shame on you, Mercedes), and if that’s not enough, you can add the same treatment to the mirrors as well. Inside, the red trim and stitching have been swapped for silver—a pleasant accent for the diamond-pattern leather covering the low sport seats. And naturally, there’s more carbon trim inside, too.

You have a choice of two wheel colors, matte black with a polished silver rim flange or the same treatment with the silver hitting the spokes as well. Tires are 265/35 in front and 295/30 in the rear, and they're wrapped with new Dunlop Sport Maxx Race Cup tires designed specifically for the Final Edition. Brake calipers are painted red, so you’ll know they’re still there. Carbon-ceramic brakes are an option and really should be standard here. With a car that’ll jump to 60 mph in just 3.6 seconds and can break the tires free in nearly any gear, being able to slow down confidently is a good thing.

All that power is handled by the 7-speed, AMG Speedshift dual-clutch transmission, actuated by steering-wheel paddles. Keep the pedal pinned on a long stretch of road, and you’ll find yourself just a few miles per hour short of 200. The rear wing and front splitter will keep the tires touching the asphalt at those speeds, which I hear is beneficial, and they’ll also increase grip during high-speed cornering. Coupled with the special Cup tires, this may be the most forgiving AMG SLS to date.

Have you ordered one yet? With only 350 getting built (yes, that’s split between coupes and convertibles), if you haven’t called your local dealer already, it’s probably too late. But it’s a fitting finale for this gentleman’s Viper—a last act that’s both excess and understatement as we see the end of the AMG 6.3.

What's your take on the 2015 Mercedes-Benz SLS-Class?

Have you driven a 2015 Mercedes-Benz SLS-Class?
Rank This Car