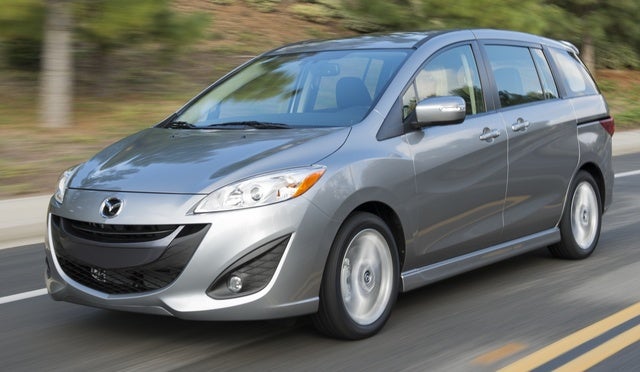 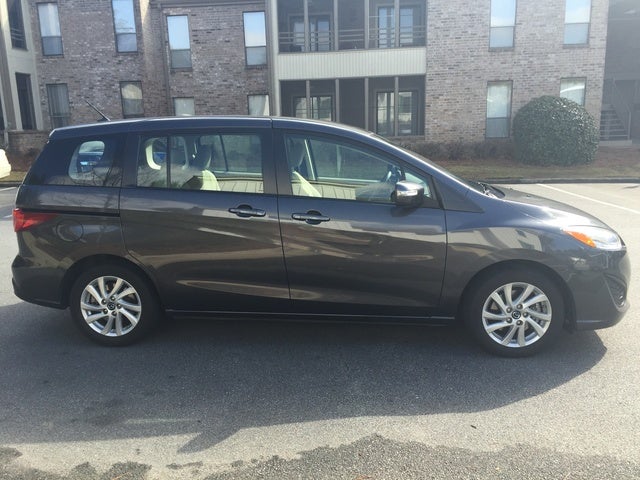 Need a true minivan, with emphasis on the “mini”? Check out Mazda’s 2015 Mazda5 6-passenger compact minivan. Parking-friendly dimensions and 3 rows of seating mean this downsized people-hauler fits right in with the growing family, while a fuel-miserly 4-cylinder powerplant gets you where you’ve got to go steadily, if not speedily.

Look for the 2015 Mazda5 to return in 3 trims—the base Sport, the midlevel Touring, and the flagship Grand Touring—and though comparatively Spartan by modern minivan standards, this mini offers at least the basics inside its sleek and swoopy profile. That third row, by the way, is for kids only, while cargo room isn’t exactly massive (44.4 cubic feet to the second-row seatbacks, with total cargo area unavailable), and a narrow loading bay might leave you geometrically challenged when contemplating bulkier items.

The only notable change for the 2015 Mazda5 from last year is the deletion of the 6-speed manual transmission in favor of a standard 5-speed shiftable automatic. Otherwise, this pint-size passenger van returns carrying a 2.5-liter inline 4-cylinder (I4) powerplant that puts out a mere 157 hp and 163 lb-ft of torque. EPA-estimated mileage figures make up for its anemic power output, however, at 24 mpg city/28 highway.

Standard appearance features in the entry-level Mazda5 Sport trim include 16-inch alloy wheels, while the cabin sports cloth upholstery and full power accessories. Cruise control is also standard in this base trim, as are telescoping tilt-wheel steering and a height-adjustable driver’s seat. Meantime, standard entertainment consists of a single-CD player with 6 speakers and an auxiliary audio input.

Move up to the 2015 Mazda5 Touring trim and you’ll find such added features as 17-inch alloy wheels, a rear spoiler, and rear parking sensors outside, with a leather-wrapped steering wheel and shift knob, a trip computer, and Bluetooth hands-free calling adorning the cabin.

Remote engine start is optional aboard each 2015 Mazda5 iteration, as are an auto-dimming rear-view mirror and rear-seat DVD entertainment.

Users ranked 2015 Mazda MAZDA5 against other cars which they drove/owned. Each ranking was based on 9 categories. Here is the summary of top rankings.

Have you driven a 2015 Mazda MAZDA5?
Rank This Car

How Much Deposit Should I Pay And Still Pay Through Cargurus?

Want to buy car and leave deposit. Seller needs full,payment to give me title to get registration and tags. How do I proceed to pay full,price in Cargurus ?