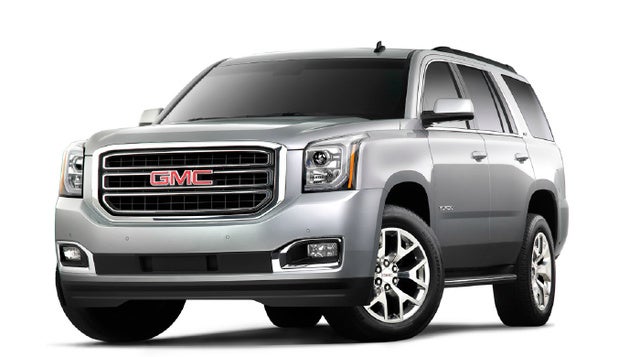 Yes, Virginia, there are still folks who find a full-size, body-on-frame sport ute not only useful, but necessary for tough towing jobs and humping the whole family to grandma's. And again, GMC’s big 7-to-9-passenger Yukon SUV stands ready to accommodate. But it’s a new-dawn Yukon that's poised for 2015, one that sports (finally) fold-into-the-floor third-row seating, as well as a bunch of interior and exterior upgrades, a slew of added available safety features and a tweaked V8 powerplant.

Of course, this new-look ute is expected to be offered once more in two essential trims, the base SLE and the up-featured SLT. A new grille and full-width bumper are complemented by a few aerodynamic styling changes to outside panels aboard the 2015 Yukon lineup, while upgraded upholstery, a standard power liftgate, a new 8-inch touchscreen and some updates to GM’s IntelliLink smartphone apps will also distinguish the incoming from the outgoing generation. Alas, cargo capacity is cut from nearly 109 cubic feet to only 97.4 cubic feet with the addition of the fold-away third-row seats, but the frustration factor of removing those bulky seats is lowered by about a thousand percent. Additionally, the liberal use of aluminum in door and liftgate panels cuts a few pounds from this leviathan’s still-significant heft.

An up-powered EcoTech3 5.3-liter V8 powerplant is expected to drive the 2015 Yukon using variable valve timing (VVT), direct-injection (DI) technology and cylinder-shutdown capability for improved pep and mileage. Thus, under the management of the well-wrought 6-speed shiftable automatic transmission, this peppy V8 is slated to put out 355 hp and 383 lb-ft of torque, a far cry from last year’s 320 hp and 335 lb-ft of torque. Mileage figures are as yet unavailable, but this next-gen beast’s towing capacity is maxed out at some 8,500 pounds when properly equipped. And again for 2015, the Yukon is delivered with standard rear-wheel drive (RWD), while on-demand 4-wheel drive (4WD) remains an attractive option for either trim.

As for appearance doodads and creature comforts in the base Yukon SLE, 2015 should see the return of 17-inch alloy wheels, a roof rack, side steps, a trailer hitch and wiring, and heated power-adjustable outside mirrors, with the cabin once again boasting premium cloth upholstery, power-adjustable front seats and full power accessories. Of course, cruise control remains bolstered by tilt-wheel steering, power-adjustable pedals and rear parking sensors, while OnStar Directions and Connections services are complemented by a rear-view camera. Simulated wood and alloy cabin accents, meantime, are appreciated much more with tri-zone climate control and with that brand new 8-inch touchscreen display keeping track of the single-CD player, Bluetooth hands-free calling, satellite radio and the 9 Bose premium speakers.

The top-shelf SLT, meantime, sports such additional exterior bling as 20-inch alloy wheels, reverse-tilt mirrors and a power liftgate (new for 2015) outside, with extras like leather upholstery, heated front seats and reclining second-row bucket seats uplifting the cabin. This high-end trim also flaunts a remote garage door opener, auto-dimming rear-view mirror and an added Bose speaker, with a heated steering wheel taking some of the sting out of winter.

Options, depending on the trim selected, include an off-road package (4WD only), power sunroof, rear-seat DVD entertainment, upgraded wheels and hard-drive-based navigation, as well as a few added seating configurations. A heated steering wheel and driver's memory settings are optional on the SLT, while an available new cargo-management system is also touted by GM for each 2015 Yukon trim, as are optional power-folding third-row seats.

Users ranked 2015 GMC Yukon against other cars which they drove/owned. Each ranking was based on 9 categories. Here is the summary of top rankings.

Have you driven a 2015 GMC Yukon?
Rank This Car

How Do I Cancel Everything I Created?

My drive side tail brake light works inconsistently. What I am reading, it seems that I would need to replace the whole light. However I have also been told that the other brake lights are not work...

Cooling Fans Turns On While The Start Of Vehicle

What Size Battery To Buy?

How to determine size of battery needed for 2015 Yukon Denali

42 views with 3 answers (last answer about a year ago)

We just replaced the battery on our 2015 Yukon and it will not start with ignition button. All lights interior/exterior work, radio, everything. But the engine does not start. We get a message “tu...