The 2015 BMW 4 Series is the latest in a long line of BMW coupes that are impressive everywhere, including price. 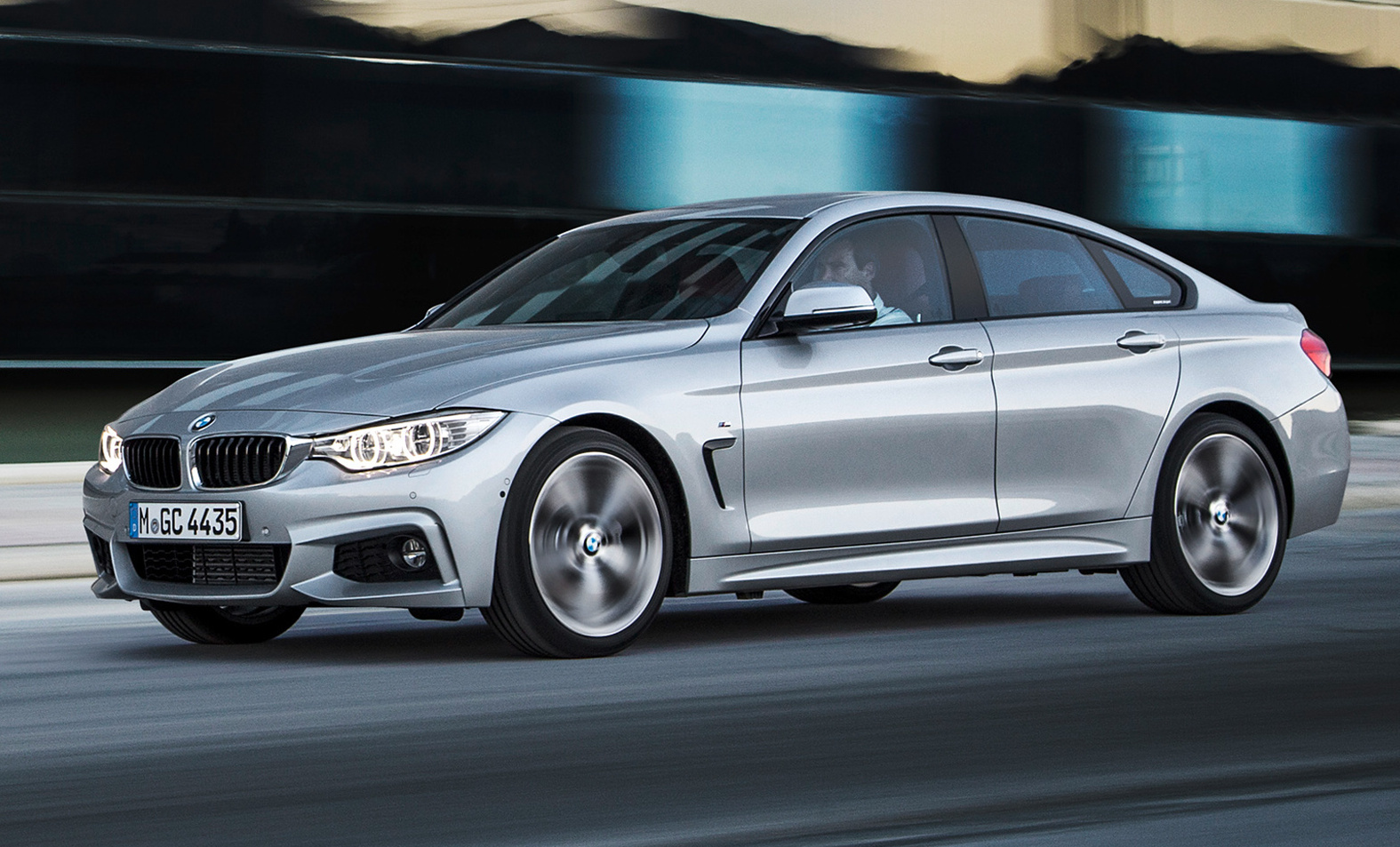 Now released from sharing a lot of sheet metal with the 3 Series, the 4 Series coupes and convertibles—and even 4-door Gran Coupe models—are evolving into beautiful cars in their own way. The longer, lower, and wider coupe presses the issue of how much you're willing to pay to be seen in one, and the two engine options provide a different experience behind the wheel. For buyers who can afford it, a maxed-out 4 Series delivers a drive that few cars can match. 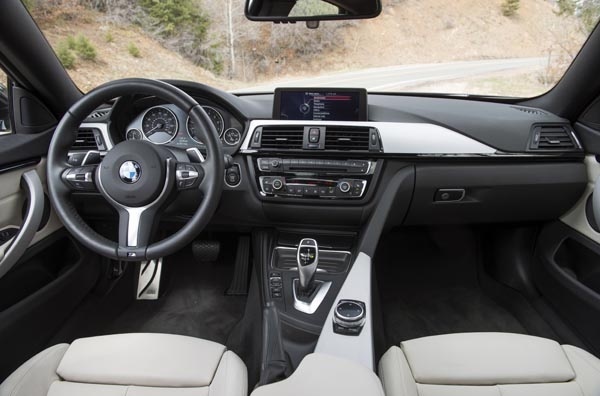 Numerical differences aside, the 2015 BMW 4 Series has separated itself further from the 3 Series, from which it was spawned only 2 years ago. Despite having a similar skeleton and 110.6-inch wheelbase, the 4 Series is longer, lower, and wider than the 3 Series and depending on specification, can be a wholly different experience than the sedan.

The coupe’s gorgeous looks and balanced chassis come standard, thankfully, given the prodigious list of options that the 4 Series can push into its bottom line. Its athletic stance is countered by its effortless design up front, sweeping from the hawkish headlights and forward-sloping grille across its long nose and hood and into its tidy cabin. The 4 Series sits well between the 2 Series’ squat rear end and the 6 Series’ long tail—the goldilocks principle is in full effect in the 4 Series.

Most buyers will opt for the 2-door coupe or convertible version, although BMW does offer the 4 Series in a sedan flavor. That car, the 4 Series Gran Coupe, may be a 4-door version of a 2-door version based on a 4-door car, but the result is more elegant than the formula would lead you to believe.

Regardless of the number of doors, the 4 Series Bimmer comes with one of two markedly different engines and an all-wheel- (AWD) or rear-wheel-drive (RWD) powertrain.

The 428i sports BMW’s potent turbocharged 2.0-liter 4-cylinder that makes 240 hp and 255 lb-ft of torque. The 435i plants BMW’s eternally wondrous mill under the hood, a turbocharged, 3.0-liter inline 6-cylinder that cranks 300 hp and 300 lb-ft of torque. Both the four and six can mated to BMW’s AWD system, dubbed X Drive, and BMW’s 8-speed automatic transmission. A manual transmission is available in the RWD 428i and in both RWD and AWD versions of the 435i for fans of the third pedal, although performance gains over the 8-speed box are mostly in owners’ heads.

An all-conquering M4 model exists in coupe or convertible form that boosts the inline 6 to an eye-watering 425 hp and an equally nuts insurance bill every month. Potential M4 buyers: You’ve been warned. 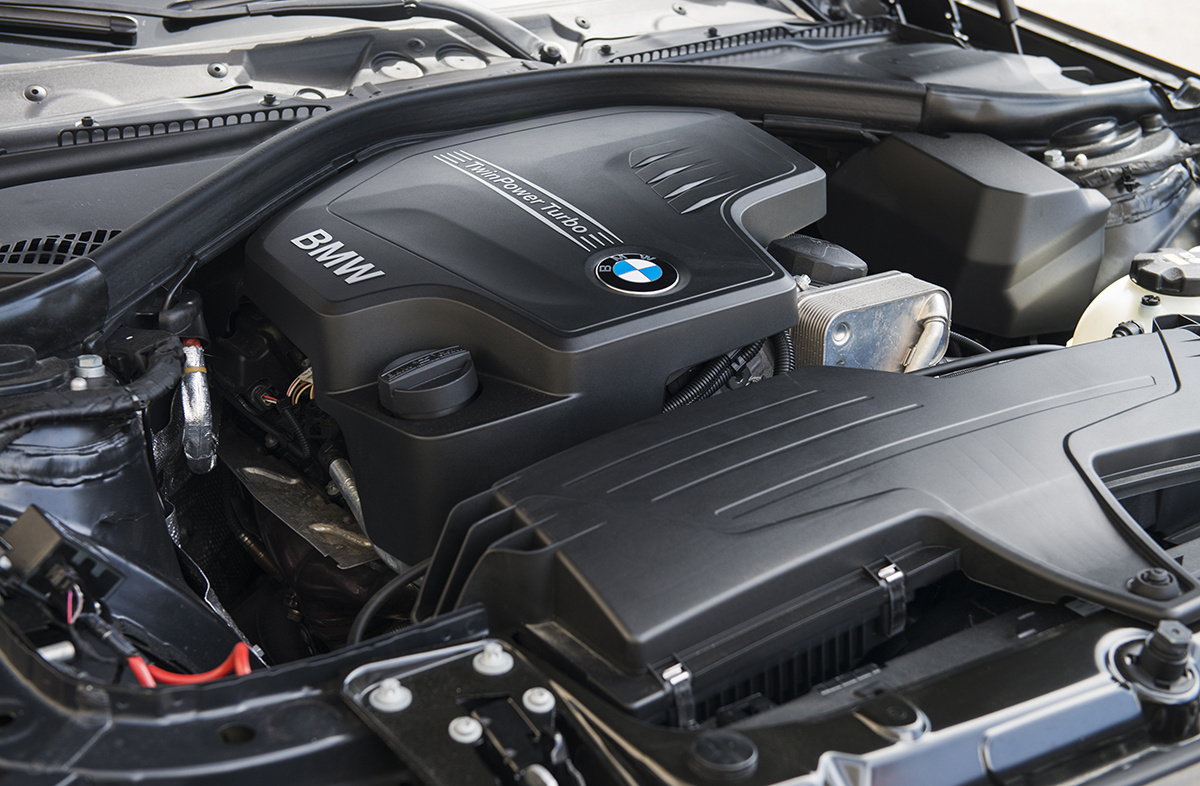 BMW made sure to offer the best chassis possible to start its line of coupes: the 3 Series. A perfect 50:50 weight distribution and short wheel overhangs give drivers the confidence to point the 4 Series’ nose and plant their right foot with predictable results. One thing hasn’t faded much since the much-vaunted heyday of the 3 Series: You’re still keenly aware of what all four wheels are doing.

Unlike the 3 Series, the 4 Series doesn’t offer a stripped version of its turbo 4-cylinder, a la the 320i. The smallest engine available, in the 428i, is built singularly to transform the 4 Series into a luxury cruiser. Its 240 hp isn’t overwhelming, and despite a 0-60 mph time under 6 seconds, it doesn’t seem too hurried to get anywhere, either. According to the EPA, the 428i returns 23 mpg city/35 highway/27 combined, provided you’re not constantly on the boost like I was all week. (My numbers were slightly lower and closer to 24 mpg in combined driving.)

Conversely, the 435i is a surprisingly different animal. The urgent turbocharged inline six springs into action and delivers power more linearly across the band. All 300 hp burst from the hood, and the satisfying burble from the dual tailpipes is among the many reasons to consider the convertible if you’re looking to buy. Performance gains are relative here: Your $5,500 extra dollars for the six knock roughly a second off 0-60 times (5.7 seconds vs. 5 seconds), but the 435i feels every bit like a tail-wagging coupe rather than a comfortable cruiser. You’re not spanked on mileage, however: The 435i is rated at 20/30/23 mpg by the EPA. (Knock 10 percent off or so if you’re opting for AWD.)

The 4 Series can be fitted with adaptive suspension systems that dial the coupe from EcoPRO to Sport+ (with the Dynamic Handling Package), which controls the steering feel and throttle aggressiveness.

Despite wearing almost identical sheet metal, the 428i and 435i feel like dramatically different cars. The 435i drives a little more effortlessly and with vigor; the 428i fades into the road and eats up miles.

In our tester, a 428i Gran Coupe, driving at altitude strained the busy 4-cylinder engine for most of its muster. Granted, at 10,000 feet, most cars show some sort of parasitic horsepower loss for lack of a deep, clean breath. But to maximize comfort and quiet the cabin noise down, we found we had to back off a little bit. Conversely, the 435i has legs for days.

Nonetheless, the 4 Series’ underpinnings can’t be understated. The chassis response is direct and meaningful (depending on options), and its road manners are impeccable. No matter how much the engine felt like it was gasping in the mountains, its solid frame begged for more and more corners.

Shod with 18-inch wheels, lateral movement and grip were predictable and precise, and when the rear wheels let go (as they can in the 435i), the fronts drag them back into shape relatively quickly. 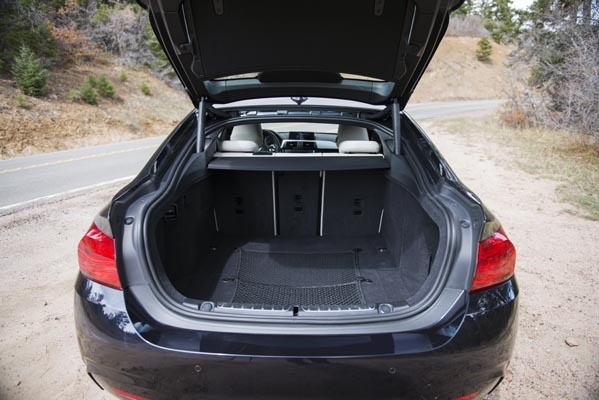 Perhaps the biggest departure for many returning BMW buyers is the steering feel in the newer 3 and 4 Series cars. Without extras such as the $1,000 optional Dynamic Handling Package, the stock electric power steering can feel light and disconnected to the front end, an unnerving feeling for many people pressing hairpins and powering out of mountain passes.

If you’re the type that likes plunging into corners, flicking the wheel and finessing oversteer on exit with fingertip inputs, bring more money to the table. For the rest of us, we’ll probably live with new electric-assisted racks just fine.

The 4 Series' brakes are familiar and potent. Throw the anchors down and the Bimmer stops repeatedly, confidently, and consistently—and without much fade, considering the coupe’s impressive 3,600-pound heft.

In coupe or convertible form, the rear seats are moderately useful. There is enough room for a child or small adult for a reasonable drive. For a large adult like me, the 4 Series’ back seat makes my knees hurt thinking about a long road trip. Our 428i Gran Coupe didn’t fare much better. Despite easier access with four doors, rear legroom is identical between coupe and Gran Coupe. If rear passengers are really your concern, the 3 Series’ 2 extra inches in the back may be a better fit.

Once all passengers are loaded, the 4 Series treads curiously between sport and leisure. The satisfying thud of the door closing speaks to luxury, while road chatter and engine noise coming through to the cabin aren’t exactly Grey Poupon. I was surprised that our 428i Gran Coupe was relatively loud on the road; it’s not unnerving, just unexpected. 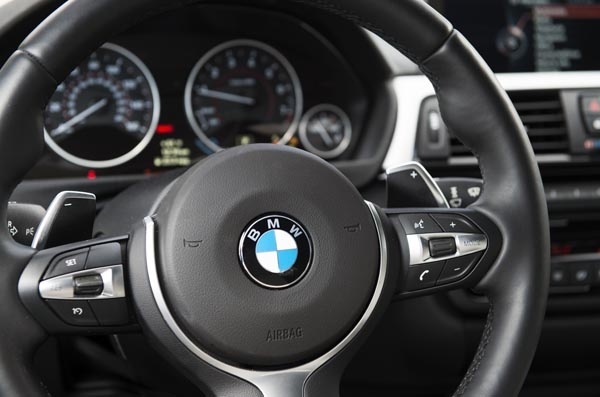 BMW’s signature has never been interior technology, so it’s no surprise that the 4 Series doesn’t top the list for interior goodies.

From a larger perspective, the 4 Series does offer an impressive list of optional goodies that can transform the coupe into a supreme driving machine, including the aforementioned Dynamic Handling Package and M Sport brakes ($650 extra).

BMW’s infotainment system, dubbed ConnectedDrive, is relatively middle-of-the-road compared to Mercedes and Audi. When equipped with an optional $3,150 Technology Package, $500 Bluetooth streaming, and a $950 rear-view camera package, the system seems like it might not be outdated next year. Menus are fairly straightforward to navigate, and if you dare to wade into the system to pair your phone, the good news is you'll have to do it only once. Our tester featured BMW’s iPhone cradle, a $500 extra, that lets users plug in their phones to the center armrest provided you have an iPhone 5. It wasn’t adjustable or usable for any other devices, and if you opt out of that privilege, you’re rewarded with an awkward hole for an option you passed up.

Other goodies include a heads-up display for the driver (part of the $3,150 Technology Package), a cold-weather package with heated seats and mirrors ($950 extra), an M Sport package with a chunkier steering wheel, aero packages, and sleeker shoes ($3,500 extra).

If all those packages are starting to sound the same—and increasingly more expensive—take comfort, the 4 Series' standard stuff is still pretty good. For instance, our Gran Coupe was surprisingly more spacious inside than it looked and featured a usable trunk/hatch. The coupe’s 15.7 cubic feet of trunk space is big enough for a couple of golf bags, and the Gran Coupe’s 17 cubic feet is actually remarkable. If you opt for the convertible and like to drive with the roof down, consider FedEx for your cargo needs. 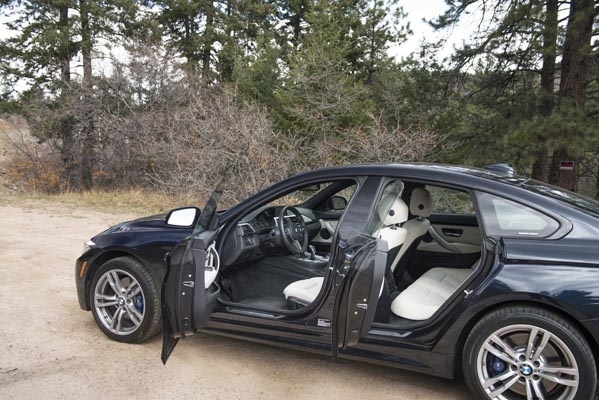 Neither the National Highway Transportation Safety Administration nor the Insurance Institute for Highway Safety has rated the 4 Series.

According to a spokesman for the IIHS, drawing conclusions on the 4 Series’ safety based on the 3 Series wouldn’t be accurate or reliable. Despite similar underpinnings, the 4 Series’ A pillars and significantly different shell can dramatically impact crash-test ratings.

The 4 Series does offer a suite of enhanced safety features such as adaptive cruise control, blind-spot monitoring, and side- and top-view cameras for $1,900 extra.

Standard safety features include antilock brakes; driver and passenger front, side, and knee airbags; daytime running lights; and BMW’s Assist eCall that automatically calls for help if the car has been in a significant crash. 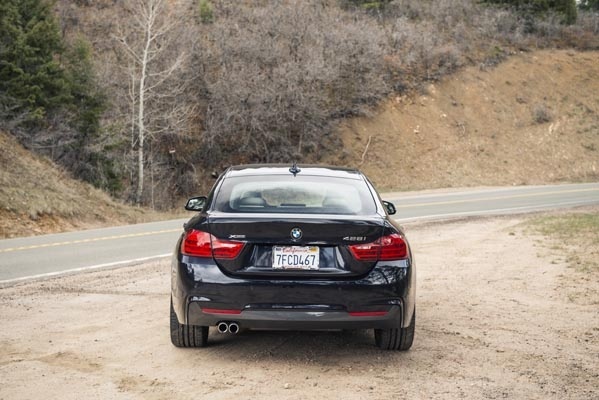 To wring out everything the 4 Series has under it’s svelte shell, it’s almost necessary to add a lot of options. When packed with adaptive suspension, the turbo 6-cylinder (the 8th wonder of the world, in my opinion) and a must-have color, the 4 Series dwarfs many other comparable sports cars by price. And lurking is the $64,200-to-start M4, an insanely fast coupe that tempts well-heeled buyers into believing they’re driving superstars.

Many BMW buyers will justify the price with the coupe’s good looks. And from the outside, that’s tough to dispute.

Users ranked 2015 BMW 4 Series against other cars which they drove/owned. Each ranking was based on 9 categories. Here is the summary of top rankings.

Can I Sell My Car Here?

Can a individual sell there car here? Ed

What Kind Of Issue To Expect

How To Write A Review

I want to leave a review with a dealer

dears, i have bmw 428i got lights that shown engine compartment is hot. any idea?