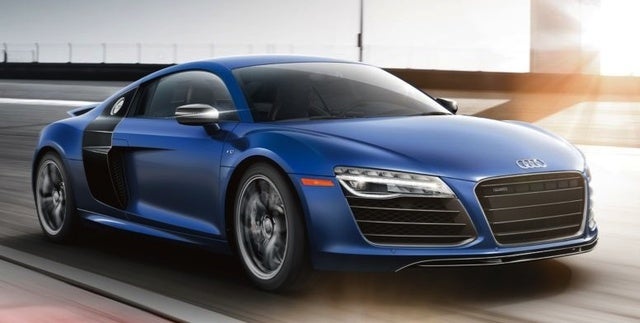 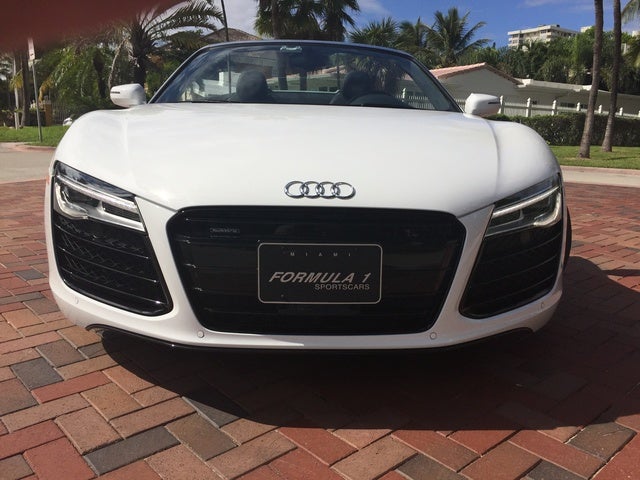 The R8 is coasting on a 2013 redesign on its way toward an update in 2016, so there’s little change to be had this year for Audi’s midengine monster. Still, a few features here and there keep things mildly fresh as we wait for what’s coming next down the pipe from Audi. That means a slight shuffle on exterior colors, some standard power-folding mirrors, a fresh quilted Alcantara headliner and interior, and a new optional sport exhaust for the V10.

But the R8 doesn’t start with that Lamborghini V10. As its namesake implies, its heritage comes from a good old V8, nestled behind your ears, egging you on to superlegal speeds. 4.2 liters. 420 horses. 317 lb-ft of torque. And if those numbers don’t get you excited, look to the standard 6-speed manual transmission—an actual 3-pedal job. Not that the new 7-speed S tronic dual clutch isn’t worth some excitement, but it’s a special occasion when a car’s default transmission is still a traditional manual.

If you need a couple of extra cylinders to keep your interest, the 5.2-liter V10 delivers 525 hp and 391 lb-ft of torque—enough to rocket the R8 to 60 in just 3.7 seconds as opposed to the V8’s 4.5. Still not fast enough? The V10 Plus will tack on another 25 hp and 7 lb-ft of torque to shave another 0.3 seconds off the trip. It’s not the fastest out there, especially when Ford and Dodge are coming out with 600-hp monsters for a fraction of the price, but with the weight-saving measures that particular trim encompasses, you’re getting V10 power with V8 prowess. And not that anyone who buys an R8 will be overly concerned with gas prices, but the V8’s EPA-estimated 14 mpg city/23 highway is hardly inspiring, and the V10’s 12/19 feels downright archaic.

As a contrast, the interior still feels fresh, thanks to an update last year that saw new accents and small details like new needles for the gauges. Subtle and sexy. The MMI interface is feeling quite old at this point, however, so better to concentrate on that new quilted headliner and leather option. Because of its low-slung profile, the R8 isn’t the easiest ship to board, but once inside you’ll find comfortable seats and a tilt-and-telescoping steering wheel that is a rare inclusion in a supercar. Storage space isn’t abundant with only the 3.5-cubic-foot front “trunk” and optional rear storage shelf, which is one of the major obstacles to this being a proper touring car as well as a weekend racer.

But if you just want a fast, fancy car to tool around in, the R8 can still satisfy, albeit at a price for some extra features. Keyless entry, automatic climate control, Bang & Olufsen stereo, navigation and leather are all standard. If your luxury lust isn’t sated by those standards, a Convenience Package will add heated side mirrors, a hill-hold clutch and Audi’s Parking System Plus with a rear-view camera. Meanwhile if it’s ultimate performance you’re after, carbon-ceramic brakes are available.

So don’t discount the R8 simply because a new one is about to come roaring around the apex. Any car that can go 8 years on the same design and still look fresh and exciting deserves a second look, especially in the last year of its design tenure. The fact that it goes as good as it looks only reinforces that fact.

Users ranked 2015 Audi R8 against other cars which they drove/owned. Each ranking was based on 9 categories. Here is the summary of top rankings.