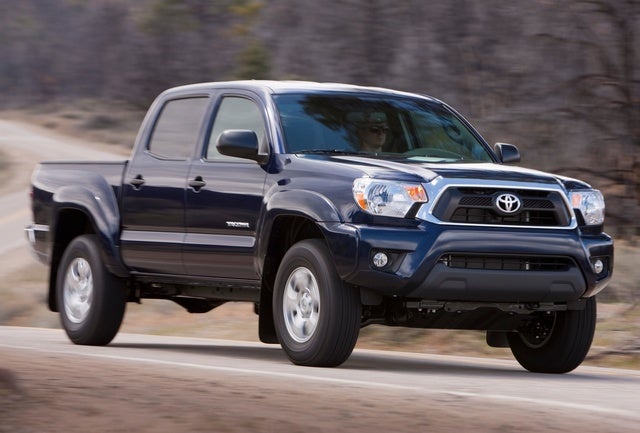 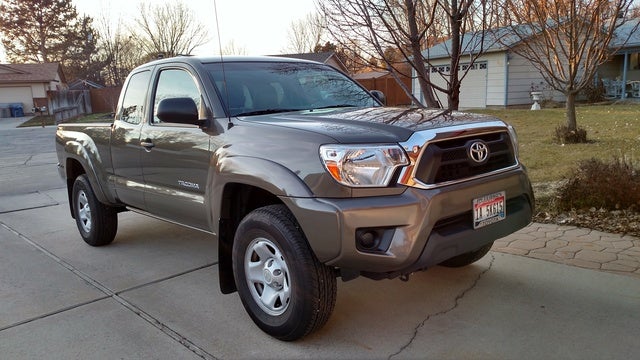 One of the last manufacturers of handy and popular midsize pickup trucks, Toyota has a winner in its rugged, off-road-capable 2014 Tacoma lineup. This downsized hauler, seriously challenged only by Nissan’s gussied-up Frontier, touts a couple of minor changes this year, but still offers three cab configuration: the 3-seat, 2-door Regular Cab; the 4-place, 4-door Access Cab with reverse-opening rear doors; and the 5-passenger Double-Cab, with 4 independently opening doors. A pair of bed lengths, the standard 6.1-foot bed and the Double-Cab-only 5-foot bed, are once again offered, while trim levels remain the entry-level Tacoma and the Tacoma PreRunner, both available in peppy V6 editions.

As noted, there are a couple of tweaks evident in the 2014 Tacoma stable, including a new SR Package option that begets various upgrades to interior and exterior décor, as well as upsized and upgraded wheels and tinted headlights. The street-smart Tacoma X-Runner, meantime, is deleted this year.

Of course, in keeping with tradition, this downsized pickup comes in standard rear-wheel drive (RWD), while all trim/cab editions remain available with part-time, shift-on-the-fly 4-wheel drive (4WD). Said 4WD system includes hi-lo gear selection using the unique push-and-turn dial and an automatic rear limited-slip differential, as well as auto-locking hubs and available descent control. The PreRunner trim level, by the way, is offered only in the RWD configuration.

Again, a pair of engines are available to this capable midsize pickup, with the standard engine in both base Tacoma and PreRunner trim levels being a variable-valve-timed (VVT) 2.7-liter inline 4-cylinder (I4) powerplant that mates with either the delivered 5-speed manual transmission or an available 4-speed automatic transmission for 159 hp and 180 lb-ft of torque. Mileage with the 4-banger is estimated at 21 mpg city/25 highway in a RWD, stick-shift-equipped version or 18/21 in a 4WD variation with the 5-speed automatic.

Should a bit more oomph be needed, those trims given the V6 moniker carry a standard VVT 4.0-liter V6 engine that remains managed by either a standard 5-speed automatic transmission or an available 6-speed manual gearbox to put out 236 hp and 266 lb-ft of torque. Mileage estimates in V6-toting Tacoma trims run 17/21 for RWD 5-speed-automatic-laden editions to 16/19 in those Tacomas bearing the stick-shift and 4WD. Towing with a properly equipped V6-packing Tacoma is maxed out at 6,500 pounds.

Have you driven a 2014 Toyota Tacoma?
Rank This Car

Where can I find the location of the crankshaft Position Sensor for my 2014 toyota tacoma?

Hello, I’m interested in buying a vehicle I found on your website. It is advertised as a 2015 vehicle but in the photos the sticker, inside the door, shows that the vehicle is clearly a 2014. When ...

I’m Already Payed 29$ For Put My Truck U In This App But Still Doesn’t Show...

Regular Unleaded Gasoline Is Recommended But The Octane Is 85 Many Places B...

Example, Denver Colorado and other cities and areas, 87 octane is the baseline and 89 and 91 are the more premiums. Is 85 octane suitable for the 2014 Tacoma or is the midgrade or premium required?