[F]or those who seek a rugged vehicle that's as good in the mountains as it is on the freeway, the 4Runner is like a lumberjack attempting the waltz—and executing it perfectly. 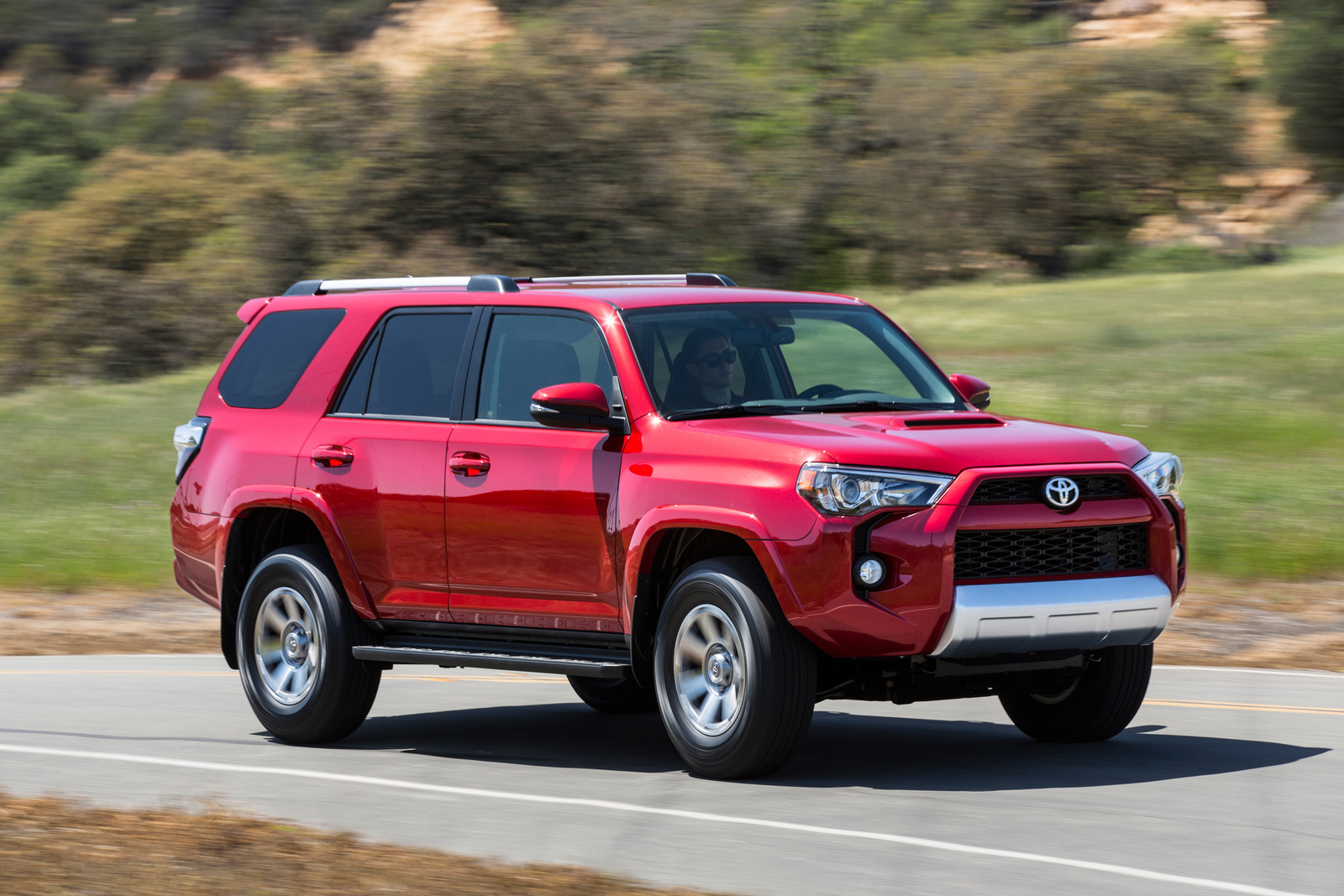 It's a marvel that traditional body-on-frame SUVs continue to exist in the modern marketplace. With the explosion of the crossover market, buyers have eschewed traditional SUVs for car-based crossovers. Many of the staples of the SUV market have moved to this crossover formula, including the Ford Explorer, Nissan Pathfinder and others. That is why it's so impressive that a vehicle like the 4Runner persists—a traditional, rugged SUV that is not as extreme as the Jeep Wrangler or Toyota’s own FJ.

Since Toyota also has the Highlander crossover in its fleet, there was little reason for the 4Runner to make the move to vehicular compromise. Instead, it has the best attributes of the Highlander and the FJ, delivering comfortable daily driving and true off-road capability for those who see the crossover as just a minivan with bigger fenders. 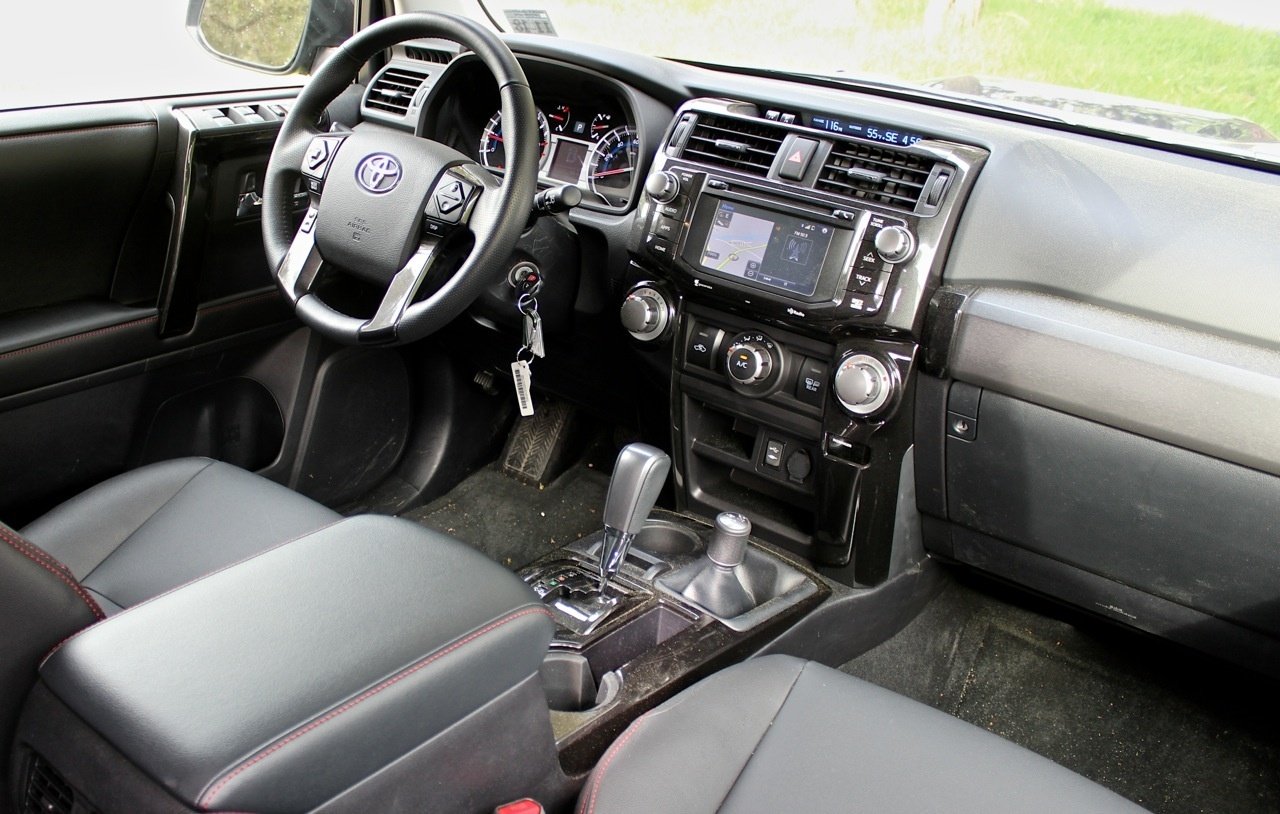 Ever since the first-generation 4Runner was replaced in 1990, each successive generation has become more rounded and smoother than its predecessor. That trend ended in 2010 with this current generation, which has been further updated for 2014. The recent emphasis is on making the 4Runner appear more aggressive, further setting it apart from more staid SUVs.

The look of the current 4Runner actually resembles the original 1984-'89 4Runner, including the long body with a raked C-pillar and flared fenders. But the original never had such aggressive headlights and body lines. The Euro-style taillights would have been better smoked out, but they still emphasize an energetic, youthful driver that will take this vehicle on all manner of adventures.

Unfortunately, Toyota decided to be just as adventurous with the 4Runner's interior design. Smart automakers know to make bold statements with the exterior design and keep things practical in the cabin. Not so with the 4Runner, as our test model featured a rather confusing climate-control setup. Luckily the (available) touchscreen makes life a little easier.

Elsewhere, the dash features a somewhat spartan slab approach, which is almost reminiscent of the vintage 4Runners from the 1980s. Only the trained eye (or a previous 4Runner owner like myself), could spot the subtle cues.

The 4Runner comes in three different trims, each with its own personality. The base model is the SR5 trim, which starts at $32,820 and comes equipped with 17-inch, 6-spoke alloy wheels, a multi-information display for the driver and a leather-trimmed steering wheel with controls for the stereo and standard Bluetooth hands-free phone operation.

Next up is the Trail trim, which we tested. It comes in at $36,725 and features all the gear of the SR5, but adds off-road crawl control, ground clearance raised to 9.6 inches (up from 9 inches) and visual enhancements that bolster the Trail’s rugged nature. The body enhancements are also functional, as it has an approach angle of 33 degrees and a departure angle of 26 degrees, which is great for taking to very hilly terrain.

The top-of-the-line trim is the Limited, which will set buyers back $41,365 before options. The Limited comes well-equipped, with 20-inch wheels, unique luxury-inspired front body work, front and rear parking sensors, dual-zone climate control and a whole host of additional upscale features.

Toyota's trim organization leaves the SR5 as the starting point, and from there buyers can go upscale in either the mountains (Trail) or the city (Limited). 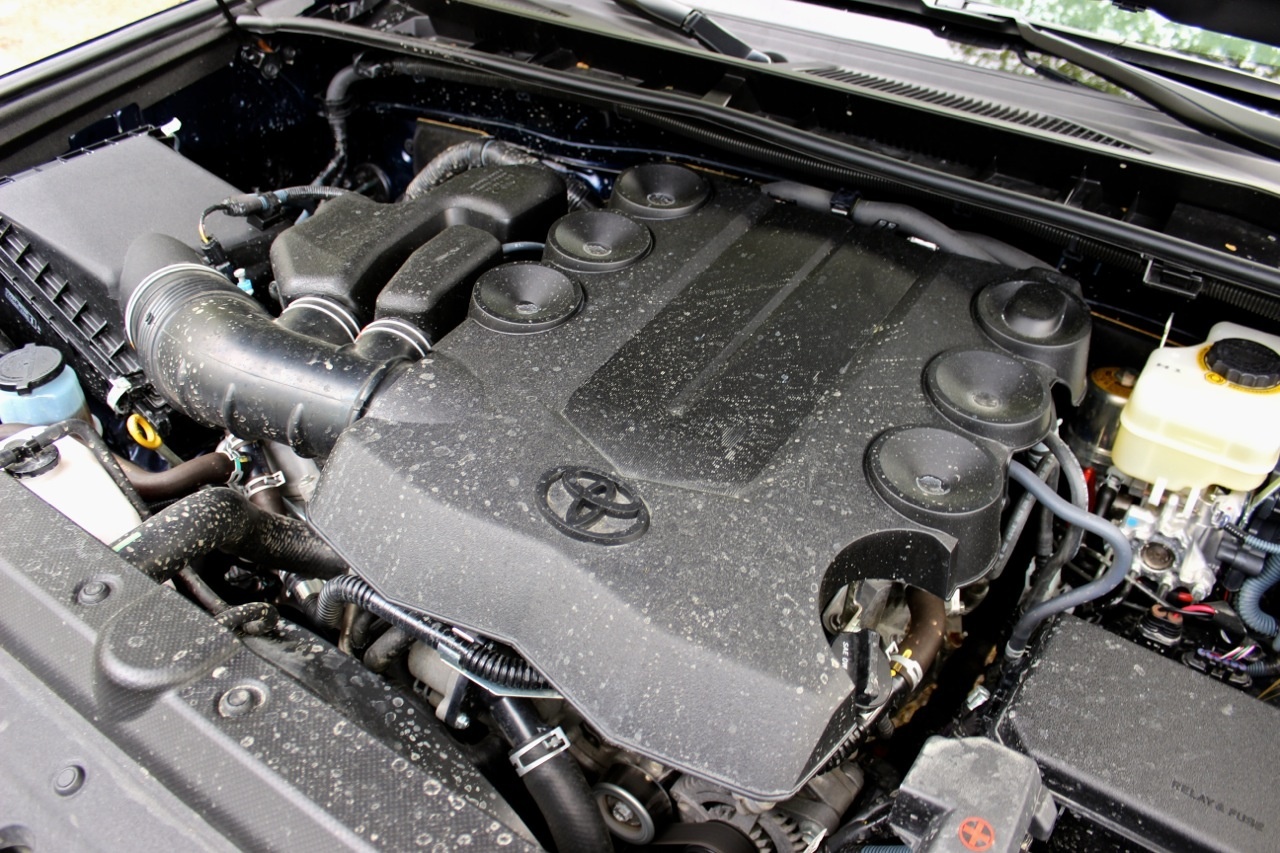 A traditional SUV requires a traditional powertrain, and the 4Runner comes with an engine that is not entirely cutting edge but ideal for this rough-and-tumble SUV. The 4.0-liter V6 has been the 4Runner’s power source since 2010, churning out 270 horsepower and 278 pound-feet of all-important torque.

Power is sent through a 5-speed automatic transmission to the rear wheels or available 4-wheel drive with low range. The SR5 has the option of rear-wheel (RWD) or 4-wheel drive (4WD), while the Trail model predictably comes standard with 4WD. The Limited features full-time 4-wheel drive with Active Traction Control (A-TRAC).

The 4Runner Trail trim puts the emphasis on off-road drivability, with some cost to on-road quality. The squishy suspension that's perfect for rocks and dirt wallows a little on typical streets. Despite this, it's not so soft as to be unsafe. Those who have owned SUVs in the past will feel right at home, as they will be accustomed to the 4Runner's unique handling characteristics.

The Trail trim is also available with the impressive Kinetic Dynamic Suspension System. This innovative option will constantly adjust the front and rear stabilizer bars in off-road driving. If the system feels that a wheel has “dropped off,” it can actually disconnect the stabilizer bars, allowing for more wheel travel. It's an off-roader's dream!

The only real concern is the amount of forward lean under hard braking. It would be interesting to see how the 4Runner would fare with some of the more advanced 2-mode shock systems.

If you do not need all-terrain capability, the Limited has far more road-friendly handling. It leans less in turns and offers a far smoother ride, but you will not be able to ford everywhere the Trail trim can. 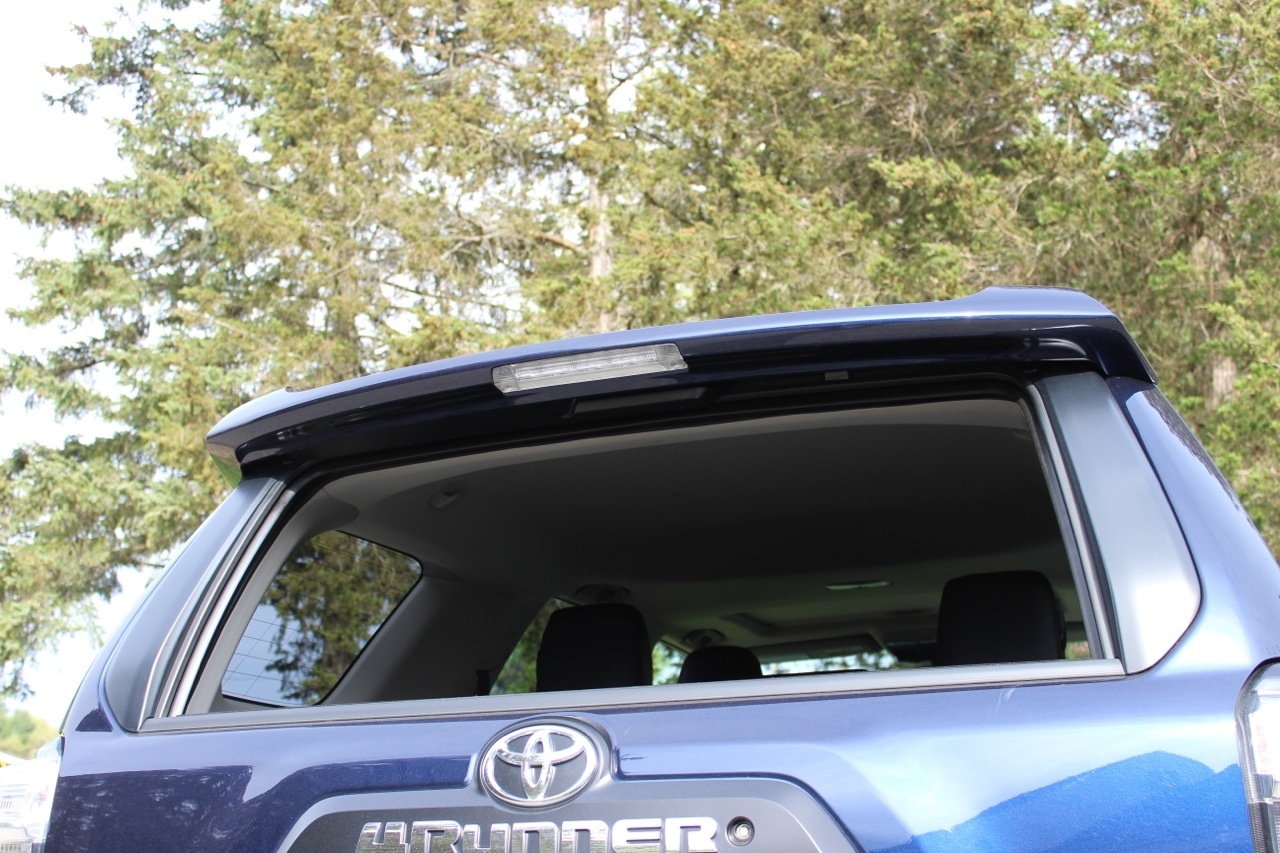 The 4Runner is a veritable Swiss army knife in the form of an SUV. Cupholders, cubbies and storage compartments are plentiful. The 60/40 split-fold rear seats lay flat, allowing for up to 89.7 cubic feet of cargo space (47.2 cubic feet with the rear seatbacks up). Unlike car-based crossovers that have a more rounded construction, the squared-off design of the 4Runner means the space in the cabin is far more usable.

Up front, the seating position is high off the road, and you feel like you are driving a pickup. The spacing of controls from the driver is good, but it's the actual arrangement that is of some concern. The desire to ensure that the 4Runner looks aggressive and futuristic, inside and out, means that controls are not entirely well thought out. Their unorthodox arrangement and aesthetic results in a center console that is not easily usable when trying to operate the climate controls on the road. You have to spend an extra second locating the vent directional toggle or the temperature control. Those extra seconds your eyes spend locating these buttons means they are not on the road, which is inherently unsafe.

Meanwhile, the rest of the vehicle is incredibly useful. The large cubbies built into the doors feature multiple places for a water bottle—or several. The cargo area behind the second row can hold a large amount of camping equipment, luggage, etc. There's a large cubby behind the rear wheel well, which smartly takes advantage of space that would have otherwise been unused. This area also has a wall-style power outlet, which is great for plugging in camping gear that requires power.

Without a doubt, one of my favorite features is the power rear window, which lowers into the lower half of the hatch—a hallmark of many generations of the 4Runner! 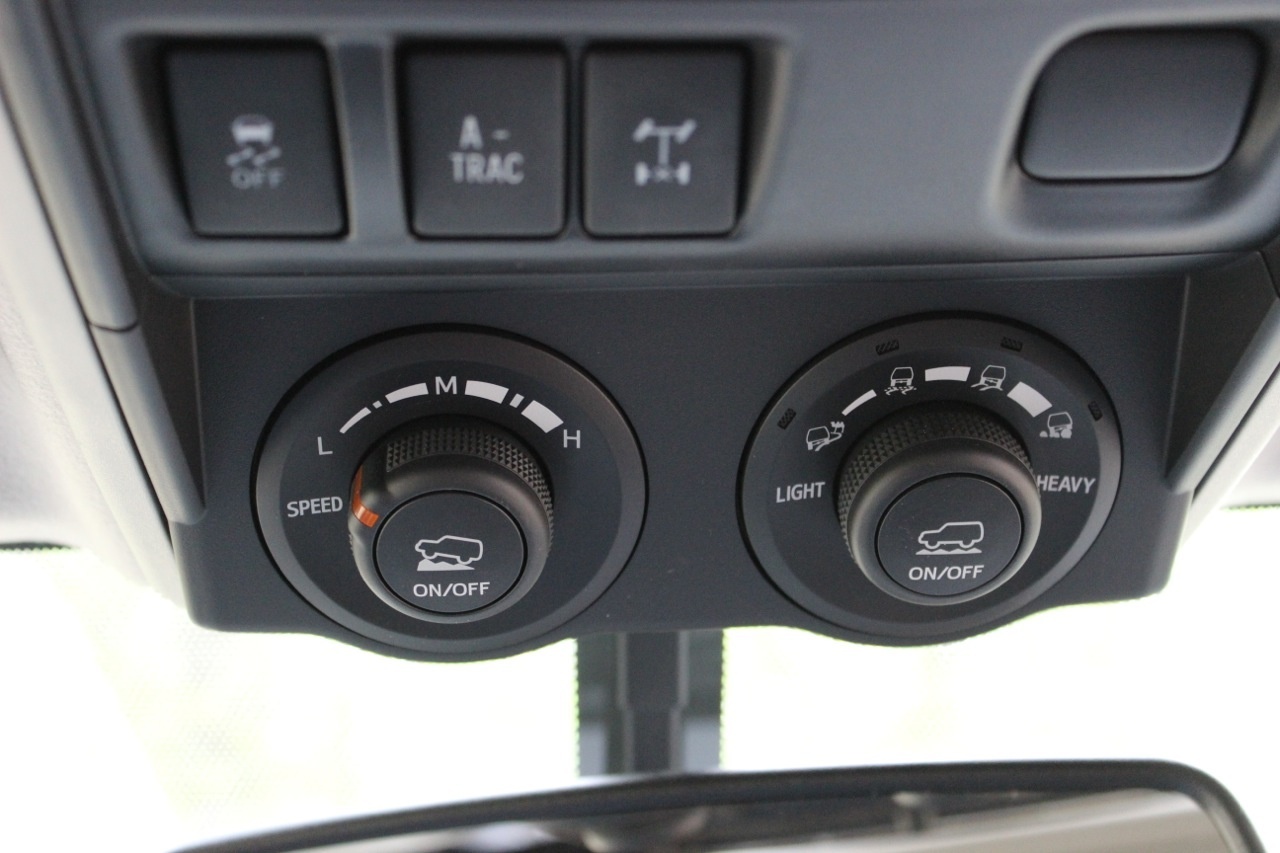 The 4Runner comes standard with Bluetooth hands-free calling, including voice commands, so you can call your friends from the trail and tell them how much fun they're missing.

If you want more than that, you’ll have to dive into the options. A 6.1-inch touchscreen is optional in the Trail trim, but standard if you select the Trail Premium sub-trim. It comes with iPod/aux connectivity, HD radio and an integrated backup camera. What the base Trail does not offer, and for which you’ll have to opt up to the Trail Premium, is the Entune App Suite. This includes BING web searches, Pandora streaming radio and restaurant searches and dinner reservations through OpenTable.

The Trail model also features some serious off-road tech, such as Crawl control, which is effectively cruise control for the trail. The system modulates the brake and throttle so you can focus more on the trail ahead. 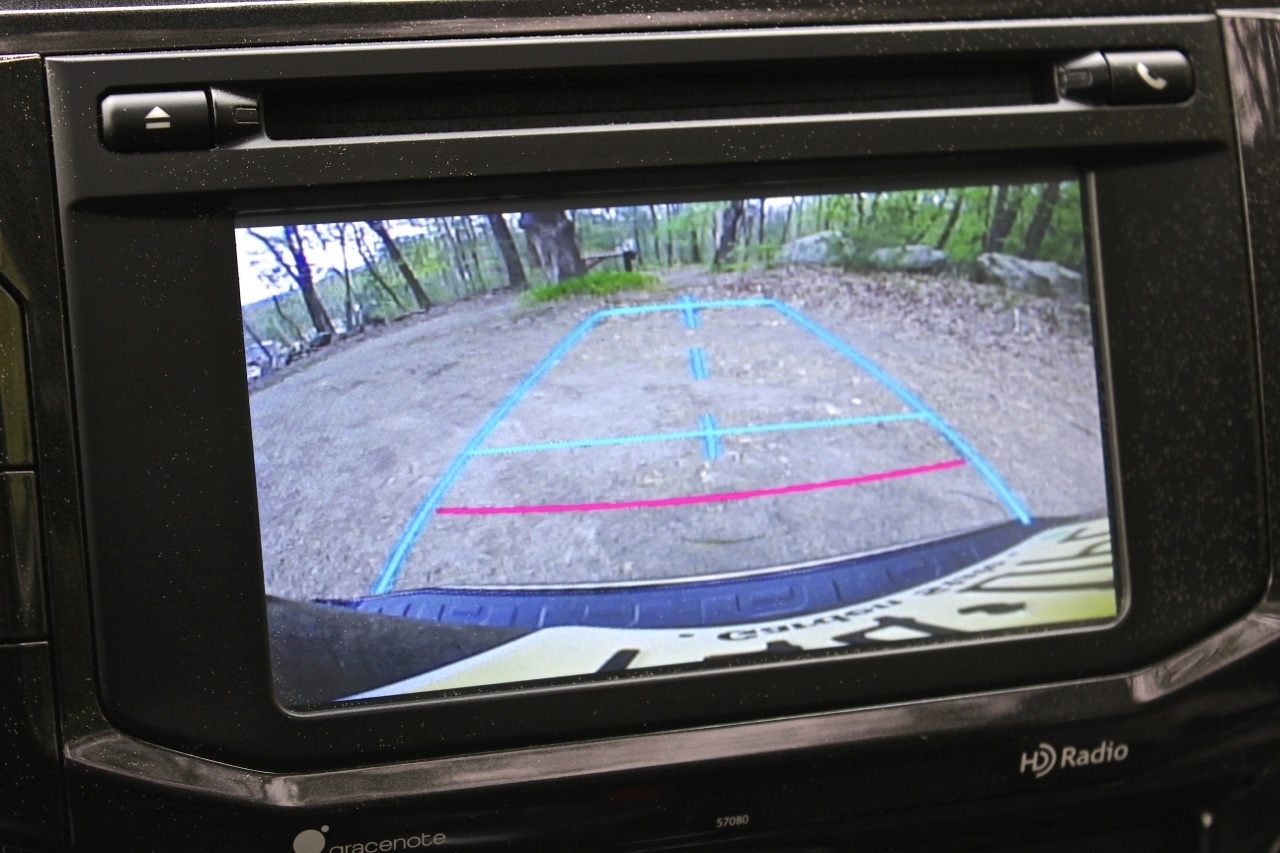 The 4Runner comes standard with Vehicle Stability Control, Traction Control and an antilock braking system, with Brake Assist and Smart Stop Technology. It also features a full bevy of front and side impact airbags, side impact door beams and a tire pressure monitoring system.

If you're not used to driving a traditional, truck-based SUV, the 4Runner may seem a little unsafe to drive, but after some getting used to it, you should feel perfectly fine. These vehicles benefit from rough construction that will withstand a significant impact. The upright construction also means that the 4Runner actually has better visibility than many new other vehicles on the market. 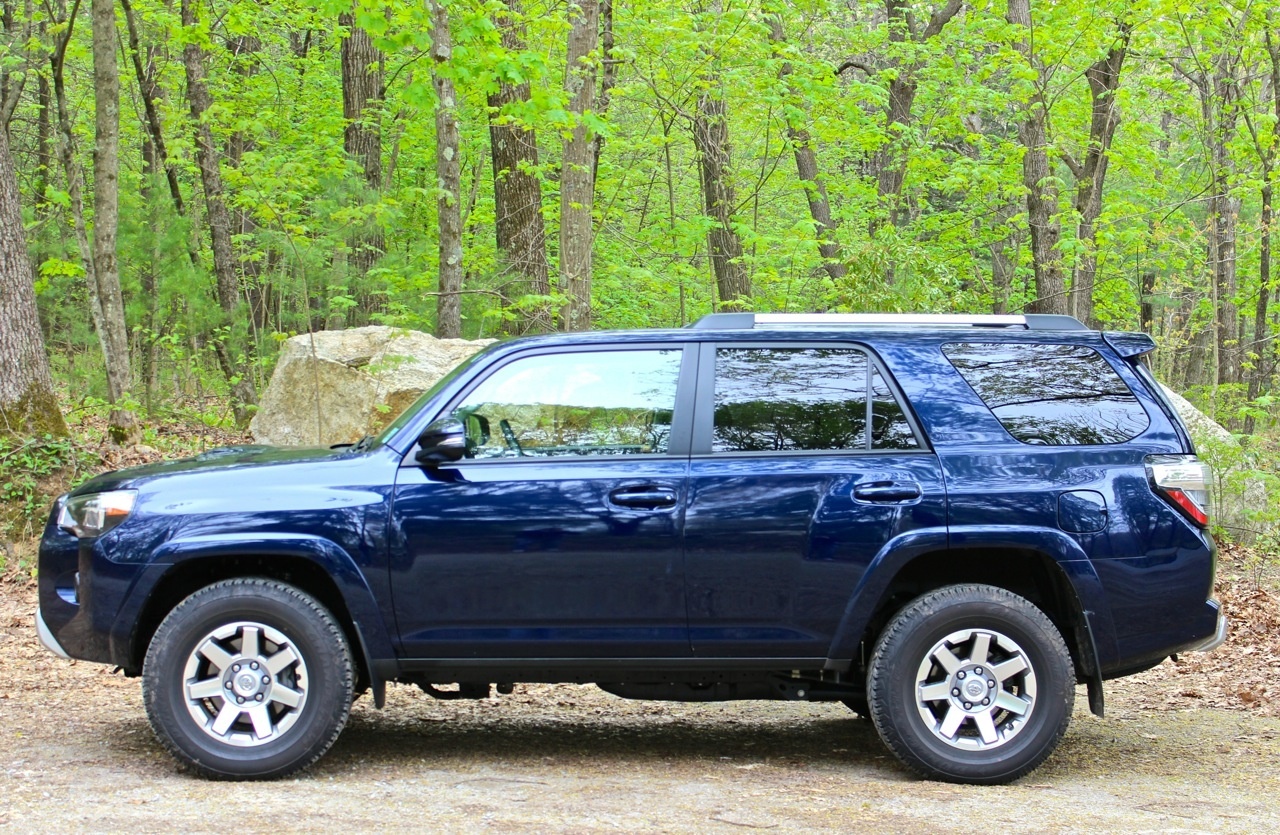 Part of the 4Runner’s legacy is that it tends to hold its resale value as well as a Lexus. Any Toyota retains its value well, but a Toyota that has the additional effect of a loyal following of outdoor enthusiasts? The $40,505 sticker price of our test vehicle may seem steep for a 5-passenger SUV, but it's sure to fetch more coin when you are done with it than a ubiquitous and anonymous crossover.

It is somewhat of an understatement to describe the 4Runner as a “unique” vehicle. It has the capability of a Jeep, the refinement (when properly equipped) of a Lexus and the practicality of a Honda CR-V. It is a best-of-all-worlds scenario, but only for those who have diverse tastes in activities. If you don’t camp, mountain bike, kayak or take the kids to soccer practice, then the 4Runner might not be the vehicle for you. But for those who seek a rugged vehicle that's as good in the mountains as it is on the freeway, the 4Runner is like a lumberjack attempting the waltz—and executing it perfectly.

Users ranked 2014 Toyota 4Runner against other cars which they drove/owned. Each ranking was based on 9 categories. Here is the summary of top rankings.

Have you driven a 2014 Toyota 4Runner?
Rank This Car

The wheel shakes when breaking at speeds over 50 On wet roads, this SUV feels like it spins out of control when making turns What could be the problem?

How Do I Cancel My Listing, Sold Privately

I sold the car, how do I cancel this listing

Why for carfax report show no accidents on a certain vehicle but car gurus says the vehicle has been in an accident?

Radio works fine most of the time, then all of a sudden goes out, but will come on later.