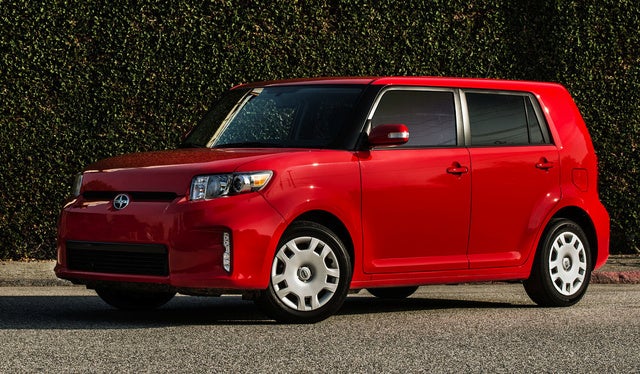 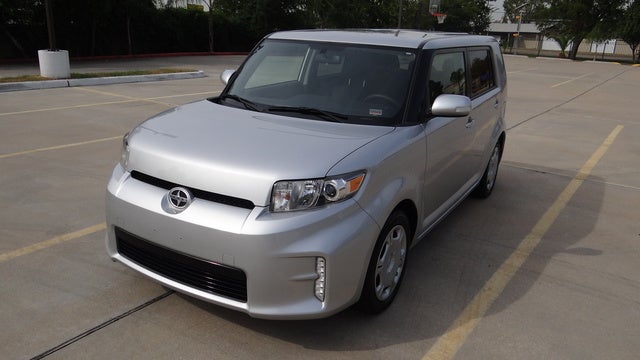 The first of the boxy/funky/quirky wagons to be unleashed on an unsuspecting but ultimately receptive public, Scion’s xB 5-seat people hauler sports few changes for 2014. That doesn’t mean, however, that this refrigerator box on wheels hasn’t improved itself since its debut nearly a decade ago. The sleek-ish, marginally swoopier look of this generation’s xB is the result of Toyota-sponsored Scion’s distancing itself from the now-passé retro-isms of its introductory generation, but many in the automotive biz nevertheless consider a comprehensive reworking overdue.

In any case inside, the 2014 xB will never be mistaken for a Bentley, however, its single Base trim comes with a plethora of passenger room, while cargo area remains some 69.9 cubic feet with the rear seats folded. Additionally, a fold-flat front passenger seatback adds a few more cubes to the toting total, with rear seat room and comfort still described by virtually all reviewers as better than average. Alas, competitors like the Nissan Cube and Kia’s well-wrought Soul, though relative latecomers to the squared-off wagon wave, have garnered the lion's share of the market.

Nevertheless, returning in the 2014 xB is the surprisingly peppy 2.4-liter inline 4-cylinder (I4) powerplant that’s touted to get 158 hp and 162 lb-ft of torque when mated with either the standard 5-speed manual transmission or the available 4-speed shiftable automatic. Unfortunately, despite variable valve timing (VVT), the xB’s mileage numbers aren’t as up-to-snuff at 22 mpg city/28 highway as those of some others in its segment. Furthermore, the standard electric power steering won’t do much for getting a feel for the road, but then this is a family-oriented car, not a track star.

Options again are expected to be a little overwhelming in detail, with TRD (Toyota Racing Division) wheels, brakes and suspension components taking star billing, backed by such available add-ons as a rear spoiler, BeSpoke upgraded audio (new for 2014), satellite and Internet radio, and Aha smartphone apps. Along with the upgraded stereo system comes a hard-drive-based navigation system that plays well with the BeSpoke’s larger color touchscreen display, also improved for this year.

Users ranked 2014 Scion xB against other cars which they drove/owned. Each ranking was based on 9 categories. Here is the summary of top rankings.

How Do You Determine The Value Of A Vehicle?

how do you determine the IMV value of a given model vehicle? for instance I see the same, make/ model vehicle, same year, same options, similar physical condition by pictures etc, but in some cases th...