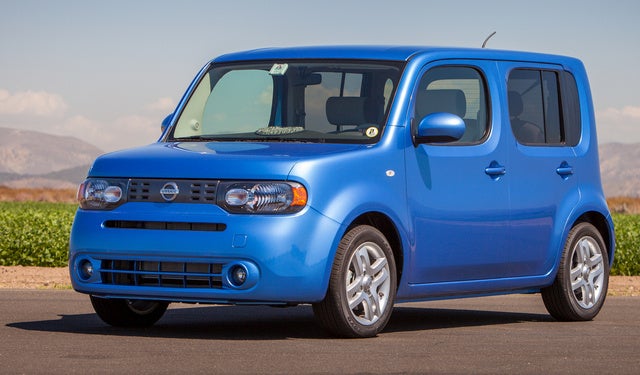 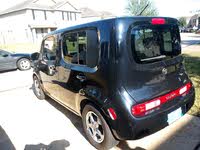 The distinctively different Nissan Cube turned heads when it first appeared in 2009, and it continues to appeal to auto buyers seeking something a little different. Although it's not the most aerodynamic vehicle ever built, the Cube compact wagon offers a roomy, functional cabin with plenty of headroom and cargo space, as well as good maneuverability and a decent list of standard features. For 2014, the Cube receives a new Caspian Sea exterior color as its only update, rolling into the new year essentially unchanged.

The Cube's unique design remains one of its biggest calling cards. The well-named Cube displays a tall, boxy shape with a unique asymmetrical wraparound rear window, which provides good visibility out the right side. Like all the other windows, it has rounded rather than angled corners, providing a bubble-like appearance. Up front, the Cube's snubby nose features widely spaced headlights framing a dark narrow grille, while the short tail with its bar-like taillights completes the look. In another interesting design element, the rear hatch opens from the side, like a refrigerator door, and features a low load-in height, adding to the vehicle's practicality.

For 2014, the Cube comes in 1.8 S and 1.8 SL trim levels. Both trims include power exterior mirrors and privacy glass as standard features, while the SL also gets automatic on/off headlights. An optional SL Preferred Package adds front foglights, as well as a number of interior upgrades.

A 1.8-liter, DOHC 4-cylinder engine provides power for both Cube trims. The engine features variable valve timing for improved efficiency and produces 122 hp and 127 lb-ft of torque. It drives the Cube's front wheels through either a 6-speed manual transmission, which comes standard in the S trim, or a Xtronic continuously variable transmission (CVT), standard in the SL trim and available as an option in the S. In the S, the engine posts fuel economy numbers of 25 mpg city/30 highway with the manual shifter, which rise slightly to 27/31 for the SL with the CVT.

Most owners agree the Cube is fun to drive. Its relatively long wheelbase (99.6 inches) compared to its overall length (156.7 inches) results in short overhangs in the front and rear, making the Cube easy to maneuver, assisted by a tight 33.4-foot curb-to-curb turning radius. In addition, its wide stance helps make up for its lack of aerodynamic design, giving it decent stability and handling. By pushing the wheels out to the 4 corners, Nissan adds another level of stability and surefootedness. Acceleration remains on the slow side, but the CVT delivers smooth shifts, and the Cube feels zippy around town while running daily errands. The S rides on 15-inch steel wheels, while the SL gets 16-inch alloy wheels.

The Cube's interior remains as unique as its exterior. A swooping dashboard, oval air vents and rounded headrests and armrests give the cabin a quirky yet comfortable feel, while the raindrop-inspired interior roof resembles a rippling pond. The Cube's tall, boxy design results in plenty of headroom for even the tallest passengers. Five passengers will fit comfortably inside, with plenty of room in the rear seat, which sits higher than the front seats, providing a good view in all directions. In addition, the rear seat slides and reclines to fit just about any passenger or cargo-configuration need. The large windows provide a very open cabin feel, while numerous storage spaces make it easy for families on the go to carry plenty of gear. With the rear seats folded down, the Cube offers a respectable 58.1 cubic feet of cargo space, although that drops to a tight 11.4 cubic feet with the rear seats up and in place.

The Cube was named a Top Safety Pick for 2013 by the IIHS, which should continue forward to 2014. Although the NHTSA did not safety-rate the 2013 Cube in all areas, it awarded the vehicle 4 out of 5 stars for protecting passengers in a rollover. Standard safety features for the Cube include 6 airbags, along with Vehicle Dynamic Control, traction control and antilock brakes with electronic brakeforce distribution and brake assist.

Beyond the basics, the Cube can be customized with more than 40 accessories, which include an interior lighting system, a shag dash topper, interior trim accents, a rear cargo organizer, unique wheels, vinyl decals and illuminated stainless-steel kickplates. Owners can also choose from three accessory packages, including the Interior Designer, Interior Illumination and Exterior Accent packages, which can help make the Cube even more distinctive.

Alice have had Four Cubes starting in 2009... wish they still made them Would love to have a New one.. the only thing I did NOT like was the 2009 back seat lay back flat-- 2010 they made a slight change that will NOT allow that, since they don't make or import anymore sure would love to find a low mileage 2013 or 2014. This is the most remarkable vehicle for comfort handling and a joy to drive. the rouge , Juke, versa, soul . Sicon s are a BIG JOKE!!! compared to the comfort and handling of the little ugly cube. that's the best care i've ever had

Have you driven a 2014 Nissan Cube?
Rank This Car

What should a 2014 Nissan Cube idle at upon initial starting??

When I Starte My Car It Picks Acceleration Ones And There After It States ...

Have Asked Specific Questions On A Few Cars At Various Dealerships. Receive...

What Is The Little Cigarette Size Thing On The Center Drink Holder Just In ...

2014 Nissan Cube sl....any one know what this is? says PWR Hold to cycle push...has a gear symbol in the center