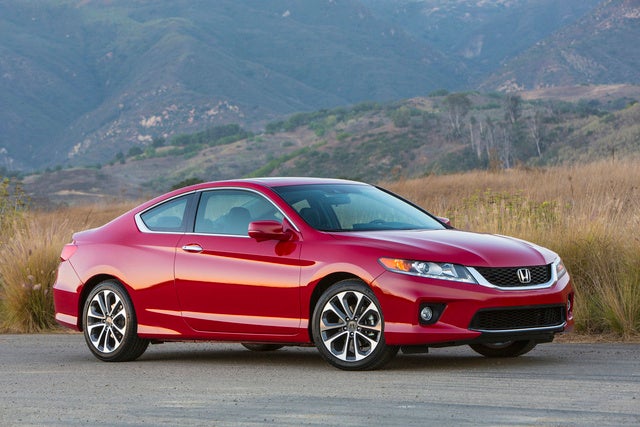 CarGurus has 1,628 nationwide Accord Coupe listings starting at $2,100. 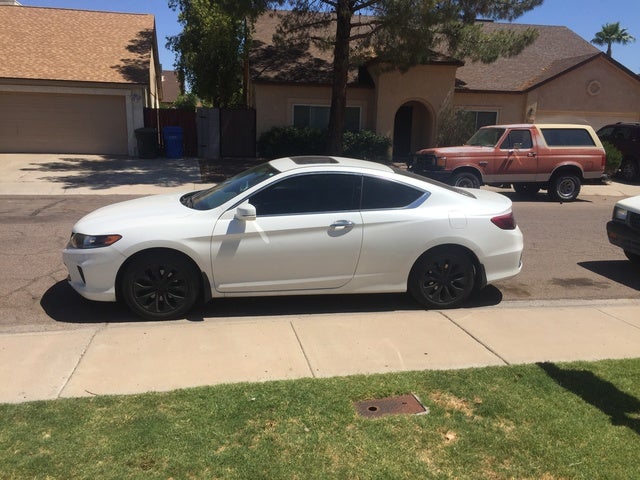 Honda's midsize 2-door follows its sedan brother into 2014 also without a significant change over its 2013 redesign. Although an infotainment upgrade relieves some of its software glitches at debut, drivers still find plenty to complain about in both the Accord's technology and overall execution for this 9th generation, albeit not as much as for the rest of its 4-door'd family. No matter the body style, drivers universally agree that the Accord's build quality hasn't slipped a centimeter, but just sticking to Honda's hallmark responsiveness and reliability doesn't seem to be enough for most real-world drivers, who are starting to demand more function to match the Accord's new form and relatively pricey tag.

Where its sedan brother suffers from intrusive road noise at highway speeds and an unexpectedly rough ride, Coupe owners enjoy a more streamlined body that doesn't seem to protest the open road quite so much, and a firm ride is just another part of your usual sporting package. That said, drivers tend to expect a more thrilling corner than the Coupe provides and generally don't expect the added costs of ownership over traditional sports cars as noted by reviewers here at CarGurus for the 2013. Otherwise the Coupe is relatively roomy, comfortable and more fuel-efficient than its competitors, but makers like Mazda and Hyundai still offer better feature content for the price, and in the case of the new-for-2014 Mazda6 Coupe, more engaging driving dynamics, too.

Offered in LX-S, EX and EX-L trims, the Coupe affords a 6-speed manual to any trim and engine combination, with a notoriously hesitant continuously variable transmission (CVT) standard only for the EX-L otherwise. A 2.4-liter inline 4-cylinder good for 185 hp and 181 lb-ft of torque is available across the board for a lineup-best 27 mpg city/36 highway with that CVT, but a V6 is available to the EX-L with 278 hp and 252 lb-ft of torque and a 21/34 rating with the CVT. Opting for the manual with this V6 is expected to drop economy to 18/28, but it would certainly also drop that zip-to-60 mph time below the CVT's tested 5.6 seconds.

Fun as that setup sounds on paper, and as much as drivers praise the Coupe's overall performance in the real world, power isn't everything. The glitches in the Accord's infotainment systems and an attention hog of a center stack detract from experiencing that performance without at least some annoyance. What's worse, as reported by reviewers here at CarGurus, these issues never seem to stick around long enough for a mechanic to get a finger on them, but always seem to get in the way whenever the least technologically inclined person wants to do something as simple as change the radio station. Next to that, some of the complaints are simply features of the system, such as manual navigation controls being locked out when the Coupe is in motion, requiring the driver to either use voice commands that aren't always understood or come to a complete stop, regardless of whether there's a passenger to handle such things.

What's your take on the 2014 Honda Accord Coupe?

Frank I think that it is a very high quality car with fine interior appointments. The electronics glitches referred to in the article are nonexistent for me. I am, however, a techie. I own the EX-L with a six speed manual. Truly a joy on the highway, it has some torque steer under hard acceleration but that is to be expected of a front wheel drive car. Oversteer in the corners is, again, typical Honda FrontWD. I think the car is a blast to drive in most conditions and should be well appreciated by lovers of manual transmission coupes. As I age, I like the leather and nicer interiors. I am still very much about 'Go" and this car is one to scratch both itches. Hope you like it as well.

pizazza I tested drove the Honda Coupe V6 and found the ride to be rough and bumpy like with lots of road noise entering the cabin. The closing of the doors seemed to be less than solid, the quality of the interior design is dated, the car seems like the same vehicle of years ago. Honda lost me as a potential buyer for 2014.

Tyler I love this car. I have the 2014 LXS withe the 4 cylinder and CVT. People who bitch don't like the sporty ride, and can't afford to pay to play

Users ranked 2014 Honda Accord Coupe against other cars which they drove/owned. Each ranking was based on 9 categories. Here is the summary of top rankings.

Have you driven a 2014 Honda Accord Coupe?
Rank This Car

Cars compared to 2014 Honda Accord Coupe

CarGurus has 1,628 nationwide Accord Coupe listings starting at $2,100.

Can I Ask For Car "wanted'?

not sure yet but low miles etc etc usual stuff.

The original tires on a 2014 Honda Accord Coupe had a 94 load index. Can I mount 93 load index tires?

I've brought my car back to the dealer but have been given no answer except that it's how I drive or I don't do enough highway driving. My car was rated 21- 35 mpg. Help!

2014 Honda Accord Coupe Trims For Sale