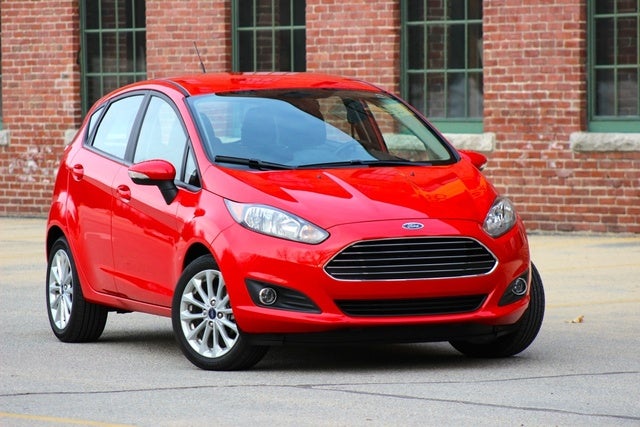 Average user score
4 ⁄ 5 stars
Based on 10 reviews
Review by integrityautoplace — This is cute little car, fuel efficient, safe, and be careful because its fast. Read more
Great Car by sarakabbani0 — I love how flexible the car is, it is very cost effective and does not spend much fuel. excellent handling plus the trunk is big for a small car,. But it is a little bite small at the back. Excellent... Read more
Perfect For A 20 Year Old Boy by Kasper — I love the fact that it is super fun and easy. It's not good for highways tho. but in traffic its more quicker than other cars, because it is very agile and accelerating. I'd recommend this for any yo... Read more

In city and highway driving, the Fiesta is composed, with little body roll. If you know what you are doing with a manual, you can have some serious fun. 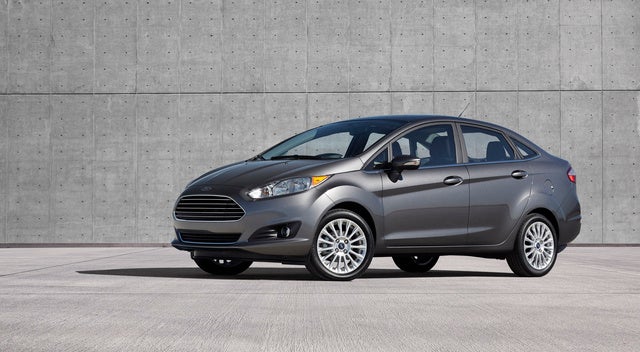 If more subcompacts were like the Ford Fiesta, more buyers might actually want to own city cars. I have not always felt this way about the diminutive Ford runabout, but with its 2014 mid-life refresh, the Fiesta now has standout looks. That's important, because it will draw more people into what the Fiesta has to offer: a well-equipped interior, with artful styling and all-important entertainment technology.

For a lot of folks, a car purchase is aspirational. They buy what they want to be, rather than what they are. That’s why Toyota created the Scion brand—in part to sell to younger buyers, but mostly to sell to older buyers who want to feel young again. The same can be said for MINI’s success. The updated Fiesta has the right look and the right equipment to be a sensible hatch, but also fits younger drivers looking to own a vehicle that makes them feel more mature. 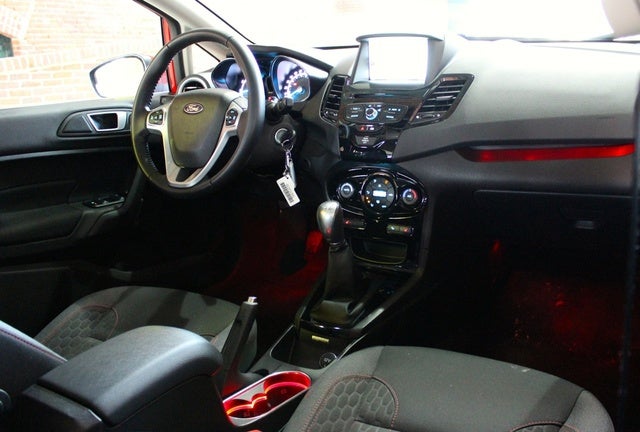 The big changes for the 2014 model year are the updated front and rear ends, about which all we can say is “Thank goodness!” Up until this point the Fiesta had an obviously youthful appearance, which did just fine but rendered the car relatively anonymous. Now, the Fiesta gets a grille and headlights inspired by its big-brother Ford Fusion, and they are quite the upgrade.

The Fiesta seems to have visually grown up, and the large grille paired to the 16-inch aluminum wheels makes for a rather fetching hatch. I’m not nearly as enamored with the appearance of the sedan, where the rear window and decklid are in some sort of design limbo. It’s not quite a sedan, and it’s not quite a hatch, and it’s generally not quite right. Meanwhile, the hatch knows what it is and makes a statement.

The Fiesta benefits from a quirky and fun interior. Our test version featured red accents in the seat stitching and accent lighting that can be switched among 7 colors with the push of a button. I can remember a time when makers would add the interior glow as an option.

The Fiesta sedan starts at $14,100, and the hatch starts at $14,600. This base S trim comes standard with Ford’s Sync multimedia system, an auxiliary audio input jack and a multifunction message center with an LCD information screen. We drove the SE, which starts at $16,050 and adds standard cruise control, a trip computer, the 7-color ambient lighting system and MyKey, which allows parents to put limits on speed and volume for young drivers. The range-topping Titanium trim starts at $18,800 and adds a standard backup camera, reverse-sensing system and push-button start. 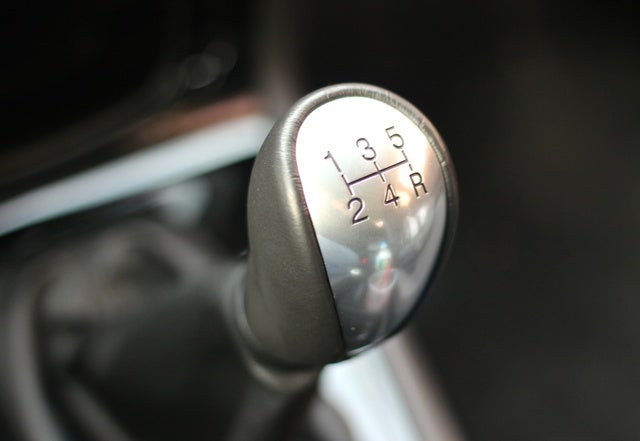 All trims of the Fiesta get Ford’s spritely 1.6-liter inline 4-cylinder engine. It makes 120 horsepower and 112 pound-feet of torque, which may not sound like a lot… because it’s not. Power is all about how you use it, and the key to cars with very little power is finding the best ways to squeeze every inch of acceleration out of them.

For that, we recommend the standard 5-speed manual transmission. Many new manuals are 6-speed, but the 5-speed unit in this vehicle allows the driver to really let each gear “walk out” (let the revs climb before shifting up), thus taking full advantage of the power band.

Peak power is made at 6,000 RPM, and peak torque is delivered at 4,050 RPM. As a result, if you want to get up to highway speeds on an onramp or overtake a vehicle, let those revs climb.

The clutch in the Fiesta is very forgiving, and the gears on the long-throw shifter are easy to find. As a result, this little ride would make for an ideal vehicle to teach someone how to drive with a manual transmission—and a great car to teach someone a bit about performance driving.

In city and highway driving, the Fiesta is composed, with little body roll. If you know what you are doing with a manual, you can have some serious fun. The pedals are close enough for heel-toe shifting, which allows this little car to come to life in any driving situation—with a minimal impact on fuel economy.

The Fiesta with the 5-speed manual is rated by the EPA at 27 mpg city/38 highway. In mixed driving, with a heavy right food, we still managed to average 33.5—that’s 2.5 mpg more than the EPA's combined-mileage estimate.

If you don’t want to row your own gears, a 6-speed automatic transmission is available. That setup is listed at 29 city/39 highway.

A 1.0-liter turbocharged engine is also on the way and will be available for SE trims. It makes 123 hp and can deliver as much as 35 mpg on the highway. 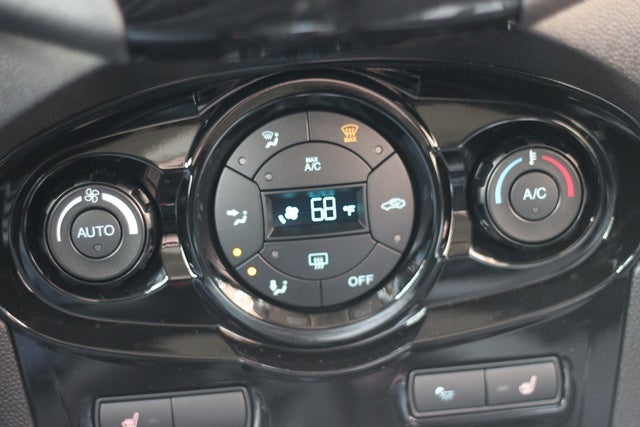 Like other compact hatchbacks, the Fiesta makes good use of its space. Traveling with any adults in the back seat will require a bit of planning, but can be done. Just remember that if you own a manual, and someone wants to sit behind you, you might have to move the seat forward, which could throw some drivers off when going back to the clutch.

Due to the Fiesta's funky dash layout, climate and radio controls are not as intuitive as one might prefer. Our test model was lucky to have the easy-to-use touchscreen, but below it is a mess of buttons on the dash for radio controls. Lower trims without the touchscreen will be reduced to using these toggles. The climate-control buttons are also a little strange to follow, but after several weeks of ownership, they should be second nature.

The Fiesta makes solid use of space, depending on which trim you select. The sedan has only 12.8 cubic feet of space in its trunk. That number increases when the 60/40 split-fold rear seats are put down, but it's awkward space and not able to hold large items. The hatch, on the other hand, has 14.9 cubic feet of space behind the rear seats and 25.4 cubic feet with those seats folded. 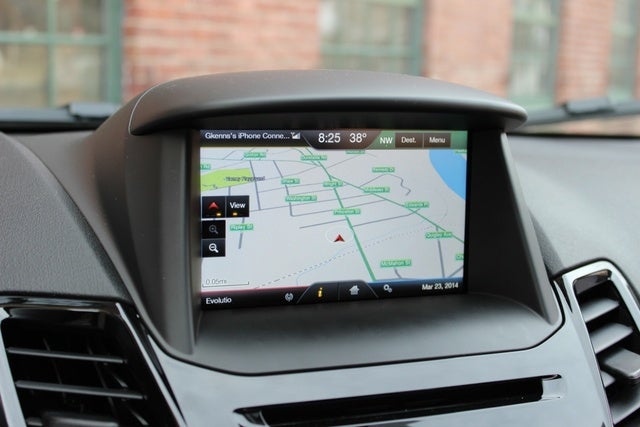 Ford’s Sync technology comes standard in the Fiesta, including MyFordTouch, which is just a fancy name for the touchscreen system. This touchscreen layout and software have gotten a lot of criticism from fellow auto writers, but it seems like by 2014, Ford has managed to work out most of the kinks in the Microsoft-based system…. Most.

One remark from owners was that the buttons and fonts on the touchscreen were too small. The font is now bigger, but the buttons still seem small. When in the main menu mode, which you see above, you need to hit the colored portion in each corner to bring that respective menu up to full screen. The problem is that those buttons are quite thin, and the navigation screen is far away from the driver. In a car with a manual transmission, the driver’s hands have to use the shifter first. Unfortunately, that meant I often pushed the wrong button in haste.

Sync’s software itself was not without its bugs. There were a couple of times when the system had one of its telltale hangups and would freeze for a half-second.

When it comes to interacting with your phone and its mobile media player, Sync earns its keep. Once you’ve paired your device, the phone does everything it’s supposed to, and the voice control is capable of understanding complex commands.

But the real benefit of Ford Sync is its music integration. With many cars, when you play music from your device and turn the car off, it's a process to get the portable music going again. With the Fiesta, the Sync system loads the phone the instant you turn on the car, and the player starts right where you left it. You’d be surprised to learn how uncommon this effectiveness is. 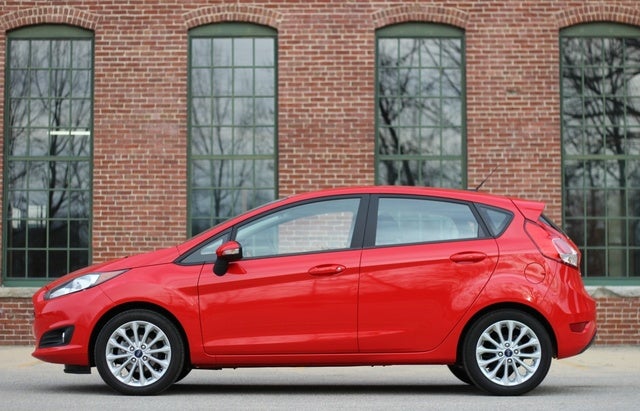 One of the hangups with small cars is safety. Construction methods and engineering have gotten so good that this should no longer be a serious concern for buyers. 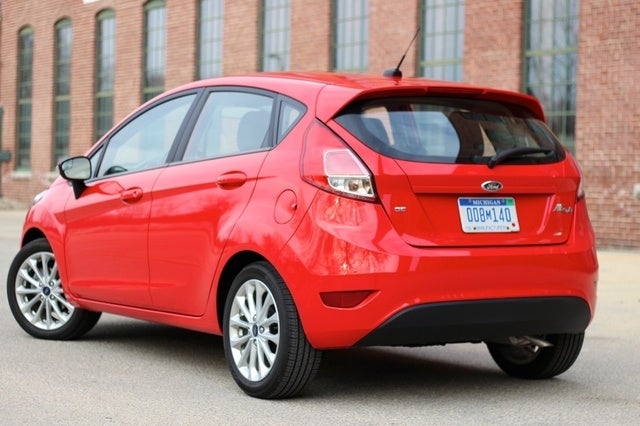 But the Fiesta scores more style points. Both the sedan and hatch versions of the Focus are awkward. But if space and size are your main concerns, the larger Focus would be the way to go.

Size is not everyone’s primary concern with these small cars. Some folks want a nimble, efficient daily driver that makes the commute comfortable because of its high-tech features, not just a bigger back seat. The Fiesta is that car, delivering a lot of goodies for short money, and for the right driver, it's a surprisingly rewarding back-roads handler.

davealanbrown The three cylinder is very innovative. Where is the automatic transmission? Most Americans drive this way.

Users ranked 2014 Ford Fiesta against other cars which they drove/owned. Each ranking was based on 9 categories. Here is the summary of top rankings.

Have you driven a 2014 Ford Fiesta?
Rank This Car

Motor Turns Over Will Not Start

2014 Ford Fiesta non turbo will not start is their a feul reset button in the trunk. The surpertin belt broke. Replace now it want start

The Battery Drains Within 2/3 Days

Battery drain for no obvious reason. When left standing for 2/3 days will not start, the battery has enough charge to open doors electronically but no power to start up. I own a 2016 Ford Focus and ...

My Car Will Not Start The Battery Is Good

How Long Can I Listen To Radio Without Draining The Battery

Hi, I have a 2014 Ford Fiesta 1.0L Ecoboost and whenever I’m listening to the radio without the engine running it operates in “1 hour mode”. Does this mean I can only listen to the radio for one ...

My fiesta has randomly overheated a couple times now. The engine hot light comes on and the AC stops blowing hot air. Every time it has happened we've shut the car off for a while and then everyth...