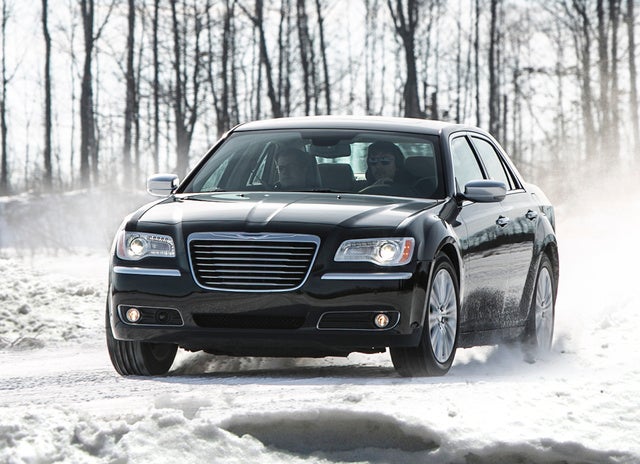 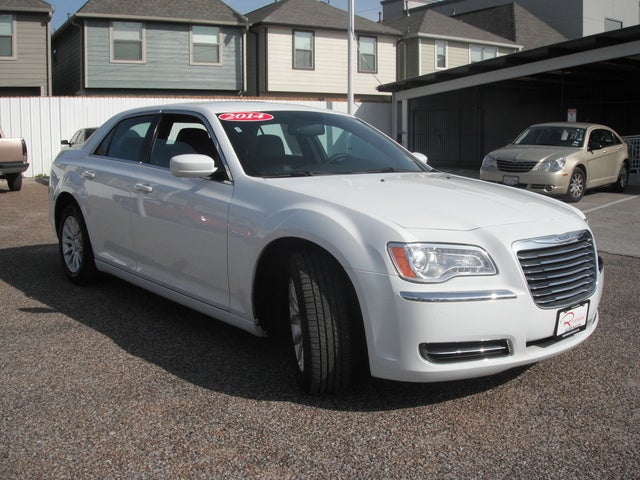 Due to debut its third generation for 2015, this year's Chrysler 300 lineup sees only a few minor value-enhancing changes in the wake of massive driver acclaim. Excepting a few rare technical glitches, drivers have been otherwise hugely pleased with this American titan-in-the-making year after year since this generation debuted for 2011, proving Chrysler can at least make a full-size touring sedan both worth its weight and fully capable of hauling it, too. For 2014, the Chrysler 300 gains not just a leather interior and the V6 standard across the board, but also easier access to optional V8 engine and safety technology.

Where most companies making an entry-level luxury sedan offer it in as few choices as they can muster, the 300 is instead offered in rear-wheel (RWD) or all-wheel drive (AWD) across 5 of its 7 trims (both the top-shelf SRT8 and “bare-bones” SRT8 Core are RWD only), with both a standard V6 and a V8 available to all but the bottom rung of those 5, resulting in some 20 different driving characters. To say Chrysler tried to offer a little something for everyone would probably be an understatement.

And “an understatement” is the theme underpinning every 300, if not at least to its “sleeper” styled SRT8 performance editions that visually vary essentially by the wheels alone. Every line reminiscent of a Bentley's, the 300's gently squared-off shell misses the mark of a bold Ben only so far as perhaps a Maserati wearing a 2-piece linen suit—authoritative in a practical sense, only hinting at what lies beneath a crisply modern skin.

That exterior look isn't expected to change much in the 2015 redesign, but the rest of Chrysler's lineup is starting the move into its futuristic “Lancia” architecture this year as well, so the 300 might yet pick up some (well-placed, hopefully?) curves. The reported bulk of the 300's redesign is focused on technology and other cabin innovations—read: untested technology from a maker not known for clean launches of new tech. That said, there's a first time for everything, and since Chrysler is busy weeding out all of the Mercedes bits from the rest of its lineup, that first time could well be this particular spree of redesigns.

Timeless on the outside and driver-tested through and through, this “outgoing” 2014 Chrysler 300 is no chopped liver, either. Praised mainly for being a complete package under half-a-hundred grand, drivers comment favorably on everything from its capacity for sport-touring double duty, supportive comfort for 5 adults, silken driving dynamics and elegant interior design enhanced by an 8.4-inch touchscreen infotainment system front and center. One driver even said he prefers the 300 to his Jaguar because it starts every time. Amazing, right?

Buying in at the baseline nets the 3.6-liter V6 good for about 7 seconds to 60 mph with 292 hp and 260 lb-ft of torque on tap via an 8-speed automatic transmission and using just 19 mpg city/31 highway for RWD or 18/27 AWD. Features here include all the expected amenities like heated mirrors, keyless entry and ignition, an auto-dimming rear-view, dual-zone automatic climate control, heated front seats, 8-way powered driver's seat and a 6-speaker CD-capable audio setup complete with Bluetooth, iPod, USB, auxiliary jack and satellite radio connectivity.

The 300 S adds more sporting drivetrain bits plus 6 horses to that V6 and the option of a 5.7-liter V8 pushing out 363 hp and 394 lb-ft of torque with a 5-speed shiftable automatic and offering about a second less than the V6 to enjoy the view to 60 mph. Fuel economy predictably plummets to 16/25 for RWD or 15/23 AWD. Moving up to the 300 C instead skips the drivetrain modifications, keeps the option of that V8 but adds a laundry list of luxuries including features like power-adjustable pedals, power tilt-and-telescoping steering wheel, front seat ventilation, memory for driver's settings, heated rear seats, rear-view camera and so on.

The Luxury and Limited only take orders from world-renowned menswear designer John Varvatos for 2014, adding many cosmetic refinements like “platinum chrome” exterior trim and an exclusive leather and hand-sanded wood interior, as well as the more sporting 300 S drivetrain mods. Going all the way to the SRT8 Core gets that 6.4-liter V8 with basics like Brembo brakes, but only the full non-Core SRT8 fetches features like an adjustable sport suspension, parking sensors and the bulk of the 300 C's features to go with its perfect balance of 470 each ponies and torque. It'll get you to 60 mph in 4.7 seconds, but at 14/23.

Users ranked 2014 Chrysler 300 against other cars which they drove/owned. Each ranking was based on 9 categories. Here is the summary of top rankings.

Does anyone out there know how to turn off the Traction Control and the ESC on my 2014 Chrysler 300s? I have tried every which way I can think off or have seen on youtube and nothing seems to wor...

chrysler 300 no start remote does not work, the new remote cannot be programmed

Remote Start doesn't work some times. All other Fob function operates properly. It seems to fail intermittently in extreme cold. If I get in the car and start normally then shut it off, the Remote ...

142 views with 3 answers (last answer about a year ago)