Average user score
4.7 ⁄ 5 stars
Based on 40 reviews
Best Car Of The Year Hands Down by pmpstr861 — Love this car so much, handles great... has great performance and great looks, interior and exterior are all modern and look state of the art and very sporty... hands down the best car i have driven i... Read more
Review by Scout101 — I think the car is beautiful n the only thing id add is a v8 hemi. Im a disabled. Veteran n in on ssd. N my credit isnt good but i have a ram 1tp0 pickup customized to trade in Read more
Review by Michael — a nice sporty look, with very good speed, interior looks and well priced. Read more 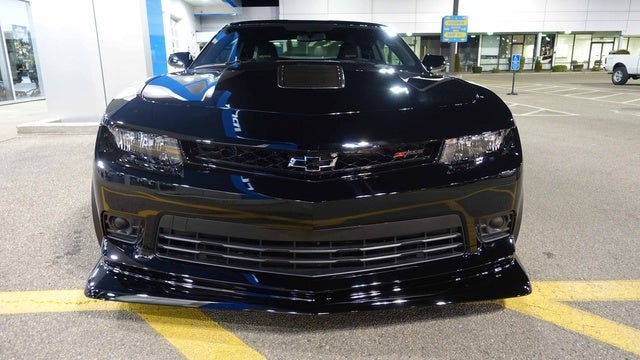 Four years ago, Chevrolet reintroduced the Camaro with a modern look and a V6 engine worthy of muscle cars to go along with the V8 choices that could melt rubber. And there's another major reintroduction this year—the track-ready Z/28 trim has returned as part of the 2014 Chevrolet Camaro lineup.

There was no backslash in the name when the first Z28 came out in 1967, hitting the track as part of the Trans-Am racing series, and the last reincarnation of this speed demon was seen in 2001. The new Z/28 uses the same engine as the Corvette Z06, a naturally aspirated, 7-liter V8 that churns out 500 hp and 470 lb-ft of torque. All that power is pushed to the rear wheels by a 6-speed manual transmission.

To get the most out of that engine, Chevrolet made sure the Z/28 was lighter than last year's top-end performance model, the ZL1, and more aerodynamic. The Z/28 cut weight with Brembo carbon-ceramic brakes, lighter wheels, less sound-deadening material, an uncarpeted trunk, no power seats and by making air-conditioning and a stereo optional. The aerodynamic changes include side fender flares, extended rocker panels, a rear spoiler, an oversized front splitter and an underbody panel. To further increase performance and that track feel, the Z/28 also comes with sticky Pirelli Trofeo tires, a dry-sump oil system, transmission and differential coolers, a flat-bottomed steering wheel and Recaro sport seats with a 5-point harness instead of a seatbelt.

While the addition of the Z/28 will grab most of the headlines for the 2014 Camaro, it isn't the only significant change, as both the front and rear fascias get noteworthy makeovers. The upper portion of the front grille has been compressed and is more angular, and the lower portion has been widened to allow for more cooling air intake, which is expelled through the new hood vent on SS trims. All the lighting on the Camaro Coupes and Convertibles has been streamlined, most notably in the rear with solid rectangular taillights. The decklid and diffuser have also been tweaked to improve aerodynamics.

There are only two interior additions for the 2014 Camaro—those Recaro sport seats are also available in other models, as is a full-color heads-up display. But just last year Chevrolet upgraded the interior materials for the Camaro and added the MyLink touchscreen audio system with an available GPS navigation system. Not to mention the high-performance 1LE option package that came out in 2013 (unique gearing, tires and suspension tuning), as well as the upgraded dampers, anti-roll bars for V8 models and the standard hill-start assist for manual-transmission versions that were all introduced last year.

The Camaro also received perfect 5-out-of-5 scores in 2013 from the National Highway Traffic and Safety Administration in its front, side and rollover crash tests. Those marks, as well as a 5-star overall safety score, should carry over into this year. Notable safety features include front, side and rear head airbags, full side airbags, electronic stability control, traction control and 4-wheel antilock disc brakes.

What's your take on the 2014 Chevrolet Camaro?

Scout101 I really like carGurus n i hope to get that car - but i love using this site you can find any car or truck. But not all cars you like the dealer doesn't call or text you it happen to me 4 times already

Users ranked 2014 Chevrolet Camaro against other cars which they drove/owned. Each ranking was based on 9 categories. Here is the summary of top rankings.

Have you driven a 2014 Chevrolet Camaro?
Rank This Car

Battery Saver Light Indicator Is On?

I had my key in the off position of my 2014 Camaro listing to music before , subsequently I received the batter saver indication; I figured due to my leaving the accessories running when the engin...

Car Won't Start, What Can It Be?

My 2014 camaro that only has 9,000 miles on it will not start, only clicks. Lights work, chimes when key is in the ignition. Battery voltage is good until start is attempted, then drops drastically...

Cracked Frame And Other Issues

Cracked frame, damage to the rear end, numerous other issues. I need someone to call me and make this right. The same day he received the car he ended up at the dealership because it wasn't getting...

My Vehicle Has No Sound. What Is Going On?

My 2014 RS Camaro suddenly has no sound. No blinker click, no seatbelt alarm, no radio and no ability to use bluetooth. The screens all turn on and the touch feature works. Just NO SOUND!