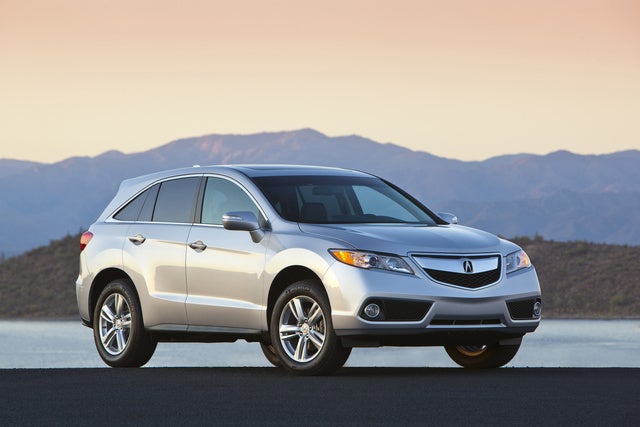 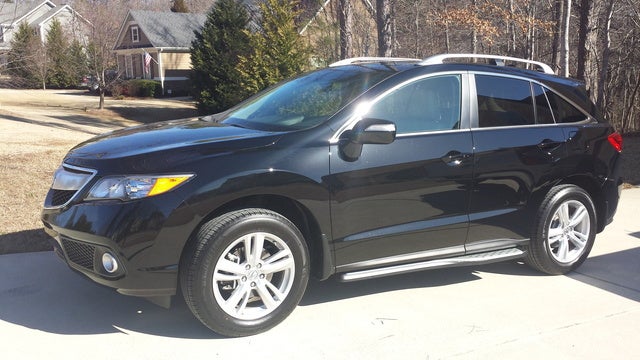 Updated in 2013 and receiving only a new Kona Coffee exterior color for 2014, the Acura RDX upscale crossover SUV offers a good balance of power and efficiency, as well as a smooth ride, a comfortable cabin, plenty of storage space and a strong list of standard features. For its 2013 second-generation makeover, Acura updated the RDX's engine, transmission and available all-wheel drive (AWD) system, as well as its exterior design and chassis to improve aerodynamics and efficiency. Other than the new exterior color, the RDX rolls into 2014 unchanged.

Acura offers the 2014 RDX in Base and Base with Technology Package trim levels, with front-wheel-drive (FWD) in its standard configuration and AWD available as an option. Power for all trims comes from a 3.5-liter V6 engine, which was updated in 2013, getting 33 more hp than the previous year. The V6 now generates 273 hp and and 251 lb-ft of torque. That's good enough to drive the RDX from 0-60 in 6.5 seconds. However, while the updated V6 certainly makes the RDX capable around town and highway friendly, some reviewers say it doesn't have the sporty performance they'd like to see from a luxury SUV.

Acura pairs the engine with a 6-speed automatic transmission, also updated in 2013. The transmission features Sport and manual-shift modes with steering-wheel-mounted paddle shifters. A Variable Cylinder Management system shuts down 2 (opposing) or 3 (in a single bank) cylinders when they're not needed, such as when cruising at highway speeds, to help conserve fuel. Reviewers say these transitions occur seamlessly and unnoticed by the passengers. As a result of this technology, the V6 posts relatively decent fuel economy numbers of 20 mpg city/28 highway for FWD trims and 19/22 for AWDs, a drop of only 1 mpg for the optionally equipped trims. The AWD system, which lost some weight and gained some efficiency during its overhaul in 2013, operates the vehicle in full FWD mode under normal driving conditions, but can distribute torque up to 50/50 front-to-rear when required on slippery road surfaces to ensure optimal grip and stability.

Although it lacks a certain sportiness offered by some competitive vehicles, the RDX delivers a capable, comfortable ride with minimal lean in tight turns. Less firm than the previous generation, the suspension aims more for family-oriented daily driving than spirited performance on the open road. Anti-squat geometry in the rear helps prevent pitching during acceleration. Acura also retuned the brakes in 2013 for better bite and a shorter stopping distance. The variable-assist electronic steering system, also updated in 2013, has a lighter feel than the previous generation and now requires more effort at higher speeds for tighter control. Noise-reduction features and acoustic insulation throughout the chassis and frame help ensure a quiet ride.

Outside, the RDX displays clean, contemporary styling that was smoothed out slightly in the 2013 update. The distinctive double-plenum front grille was toned down, and the wheel arches made a little less prominent, while the tapered roofline gives the SUV a sweptback appearance from the side. Heated exterior mirrors and a tailgate spoiler are among the standard exterior features, along with projector-beam auto on/off headlights, speed-sensing windshield wipers and 18-inch cast-aluminum wheels with Michelin all-season tires. The Technology Package adds such features as HID headlights and front foglights.

Inside the RDX's spacious, upscale cabin, passengers will find plenty of legroom and headroom in both the first and second rows. Seats for all 5 passengers are comfortable and supportive, with leather upholstery in both rows and heated seats in the front. The driver's seat features 10-way power adjustment with memory, while the passenger seat has 4-way power adjustment. The folding rear seatbacks split 60/40 and include a center armrest. With the rear seatbacks up, the RDX offers 26.1 cubic feet of storage space, which expands to 61.3 cubic feet with the rear seatbacks folded down. By moving the front seats all the way forward, owners can expand cargo space even more, to 76.9 cubic feet. Acura notes a rear opening of more than 4 feet wide (48.8 inches) with the tailgate up. Any way you look at it, the RDX can carry lots of bags of groceries, as well as all the gear required by busy families.

The RDX also offers plenty of storage spaces inside the cabin, including a large covered bin in the front center console that can hold up to 23 CD cases, if you still carry those around. If not, there's a USB port, auxiliary audio input jack and one of two power outlets in the center console. The standard audio system remains a 7-speaker, 360-watt unit with a CD/MP3 player, SiriusXM satellite radio and speed-sensitive volume. In addition, the audio system includes a Pandora interface and an SMS text messaging function.

In addition to leather upholstery, other upscale standard features on the RDX include push-button start, a power moonroof, dual-zone automatic climate control and a leather-wrapped multifunction steering wheel with audio, cruise and Bluetooth controls. Base trims also include a 5-inch color display screen, which incorporates a multi-angle rear-view camera, among other features. The optional Technology Package adds a power tailgate, a GPS-linked solar-sensing automatic climate control system and a navigation system with voice recognition, real-time traffic and real-time weather. The package also upgrades the audio system to a 10-speaker, 410-watt Surround Sound unit with a 15GB hard drive.

Six airbags come standard on the RDX, along with such safety features as Vehicle Stability Assist, traction control, daytime running lights and antilock brakes with electronic brakeforce distribution and brake assist. The IIHs named the second-generation RDX a Top Safety Pick, awarding it a top rating of Good for protection passengers in all types of crashes, including frontal, side impact, rear and rollover crashes.

Despite its good fit and finish, ample storage space and extensive list of standard features, owners give the RDX mixed reviews. Some say they're not getting the promised gas mileage, while others report maintenance and build-quality issues, requiring return visits to the dealer. In addition, a number of owners are not impressed by the cabin's level of refinement, noting it doesn't match the cabins of some competitive vehicles. On the plus side, other owners give good marks to the RDX for its performance, strong standard features list and performance, as well as its overall value. Prospective buyers might want to shop around before deciding on the RDX, and take a look at such competitive vehicles as the BMW X3, the Audi Q5, the Infiniti EX and the Cadillac SRX, among others.

Users ranked 2014 Acura RDX against other cars which they drove/owned. Each ranking was based on 9 categories. Here is the summary of top rankings.

Have you driven a 2014 Acura RDX?
Rank This Car

Is It Easier To Remove A Catytic Converter From An Acura Than A Prius?

I recently broke my center arm console latch, and had to go to dealer to purchase another one for $12.00. During the installation I lost the spring and looked high and low in my car and could not f...

I need to view an old listing(5 months old) for a vehicle I purchased. Can you send that to me?

Do I Need The Smoke Check When I Buy

do I need smoke check when I buy