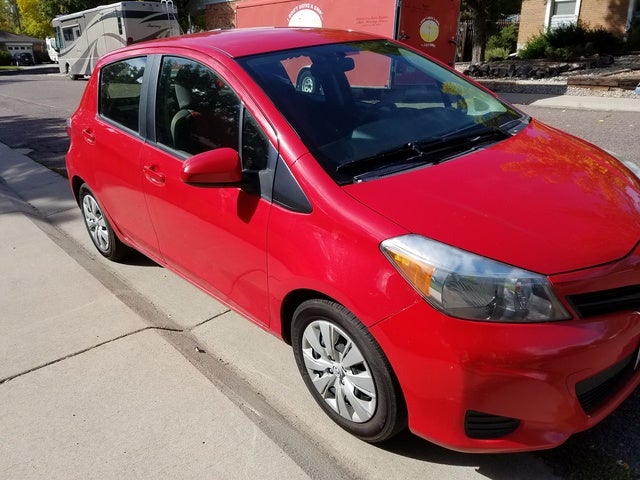 After receiving a full redesign for 2012, the Toyota Yaris liftback gets only a few minor updates for 2013. The Yaris subcompact again comes in entry-level L, mid-level LE and sport-oriented SE trims. Toyota adds a 6-speaker Tech Audio AM/FM audio system with SiriusXM satellite radio and HD radio as a new standard feature on the base Yaris L trim. The audio system also includes Bluetooth, auto sound leveling, a USB port and an audio input jack. In addition, the LE trim now comes equipped with cruise control as a standard feature.

As part of the 2012 update, Toyota gave the Yaris more angular exterior styling and redesigned the interior, moving the instrument cluster back to its common position in front of the steering wheel, rather than off to the driver's right on the center stack. Toyota also stretched the Yaris by 2 inches and decreased the height slightly, giving the vehicle a longer, lower profile, as well as more legroom, headroom and cargo space. In addition, Toyota pushed the wheels out to the four corners, providing better stability and giving the Yaris a more planted look.

Toyota offers the L and LE trims in 3- and 5-door body styles, while the SE comes only in a 5-door configuration. Outside, the 2013 Yaris displays a bold, angular appearance, with a steeply raked windshield, a sloping roof and a distinctive shoulder line that ascends from front to rear. The nose features a V-shaped grille surrounded by wide, multi-reflector halogen headlights. The LE gets power folding exterior mirrors, while the sporty SE receives a number of unique exterior enhancements, including sport front and rear bumpers, a color-keyed grille with sport mesh inserts, smoked headlight trim, integrated foglights and a rear spoiler, as well as an aerodynamic rear underbody spoiler and a chrome exhaust tip.

A 1.5-liter, 4-cylinder DOHC engine, generating 106 hp and 103 lb-ft of torque, continues to power the Yaris. The powerplant delivers decent performance around town, with a broad torque curve that helps ensure a quick jump off the mark as well as plenty of pedal when accelerating. Most owners and reviewers find the Yaris's handling quick and nimble.

In the 3-door L and 5-door SE trims, the engine links to a 5-speed manual transmission, which comes standard, or an available 4-speed electronically controlled automatic transmission with intelligence. In all other trims, the automatic comes standard, and the manual is not available. Some reviewers prefer the smooth-shifting manual, noting that it delivers a more energetic driving experience, but many wish both transmissions came with additional gears. The engine posts good fuel economy numbers of 29/36 mpg with the manual transmission and 30/35 with the automatic, which are average numbers for the class.

All Yaris trims come with electric power-assisted rack-and-pinion steering, which provides good road feel at highway speeds while delivering improved maneuverability at lower speeds. The SE rides on a sport-tuned suspension for a more energetic driving experience. In addition, Toyota adjusts the SE's steering ratio for a quicker, more responsive feel. The SE receives front and rear disc brakes and 16-inch alloy wheels, while the other Yaris trims get disc brakes in the front and rear drums, along with 15-inch steel wheels.

Inside, the Yaris comfortably seats 4 adults, although 3 can squeeze into the back seat if needed for 5-passenger capacity. In addition to the upgraded audio system, the L trim comes equipped with such standard features as air conditioning, power door locks with illuminated entry, a tilt steering wheel and a fold-down rear seatback. Cloth upholstery with 4-way manually adjustable seats in the front also come standard on the L trim. The LE adds power windows, a 6-way adjustable driver's seat, remote keyless entry and a 60/40-split fold-down rear seatback, while the sport-oriented SE also includes sport front seats with additional bolstering, sport instrumentation and a leather-trimmed steering wheel and shift knob.

The additional standard features for 2013 make the Yaris more of a player in its very competitive class, which includes such vehicles as the Honda Fit, the Ford Fiesta, the Mazda2, the Chevy Cruze and the Nissan Versa. Although owner comments are not yet available for the 2013 Yaris, the 2012 version received generally good marks, thanks to its generous cargo space, comfortable seats and good fuel economy. The Yaris handles well, say owners, who call it zippy and agile in the city, with quick starts off the mark. They also repeatedly single out the Yaris's reliability. However, some owners find the ride a little too harsh and note a few shortcomings, such as the lack of a center armrest/console with adequate storage and greater adjustment for the steering wheel. In addition, some owners regret the unavailability of the 4-door Yaris sedan, which disappeared from the lineup with the 2012 update.

Have you driven a 2013 Toyota Yaris?
Rank This Car

rear window in my 2013 toyota yaris has little, white, faint, squares. This just started recently. Would like to know what causes this. BTW, it's a hatchback.

Yesterday while idling in traffic all the lights on the dashboard came on and the steering got really hard. I tried to restart it but that didn't work, but I managed to steer the car a little out ...

Are The Accessories For The 2012 Model Compatible With The 2013 Model?