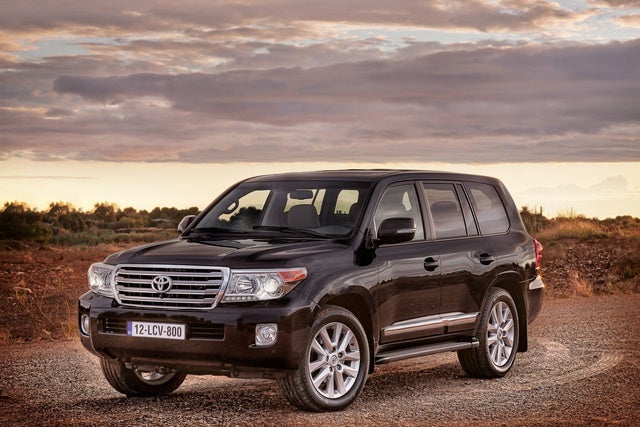 Inside and out, the 2013 Toyota Land Cruiser, which returns after a one-year hiatus, has been upgraded from the previous model. From the ground up—punctuated by new multispoke rims—the Land Cruiser has received a number of welcome enhancements.

Mechanically, the 2013 Toyota Land Cruiser, which is available as a single Base trim and runs on regular gas, remains the same. The 4-wheel-drive Land Cruiser is equipped with a 5.7-liter DOHC 32-valve V8 engine with variable valve timing with intelligence and paired with a 6-speed automatic transmission. As a result, the Land Cruiser still maxes out at 401 lb-ft of torque, making 381 horsepower.

Improved lighting is among the changes made to the exterior of the 2013 Toyota Land Cruiser. New features include updated headlights with HID low beams, redesigned taillights and the addition of LED daytime running lights. Chrome side molding has been added, and the front grille and fascia have received an update as well, along with the exterior mirrors and front and rear fenders, which have been made larger. Additionally, multispoke high-gloss, aluminum alloy wheels have become standard, paired with 18-inch mud and snow steel-belted radial tires.

In addition to the enlarged fenders, other safety features have been added or enhanced on the 2013 Toyota Land Cruiser. Underbody panels, beneath the engine and behind the rear wheels, have been redesigned and strengthened to protect the engine and transmission in the event of a collision or when taking the Land Cruiser off-road. The redesigned underbody panels also reduce drag and improve airflow, helping the Land Cruiser achieve 13 mpg city/18 highway.

The 2013 Land Cruiser, like all Toyotas, comes standard with the company's S.T.A.R. Safety System, which features a 4-wheel, multiterrain, antilock braking system that applies the proper amount of braking force in both street and off-road driving situations. The disc brakes are aided by both electronic brakeforce distribution and brake assist, which assist the driver during emergency braking situations. Same as before, the 2013 Land Cruiser comes standard with 10 standard airbags—driver's and front-passenger dual-stage airbags and knee airbags, front- and middle-row seat-mounted side airbags and three-row side-curtain airbags.

The Land Cruiser, which recently marked its 60th anniversary of production in Japan, remains one of the most powerful large luxury SUVs on the market. With the upgrades to the interior and exterior, it is also one of the most luxurious and safest as well. However, keep in mind that with such splendid appointments comes a heady price. Those on a budget might be well suited to look elsewhere, such as the Dodge Durango or even Toyota’s own Highlander if price is a selling point. If not, the 2013 Toyota Land Cruiser has a lot to offer.

What's your take on the 2013 Toyota Land Cruiser?

Users ranked 2013 Toyota Land Cruiser against other cars which they drove/owned. Each ranking was based on 9 categories. Here is the summary of top rankings.

Have you driven a 2013 Toyota Land Cruiser?
Rank This Car

Is There Anywhere On Your Site That Customers Can Leave Reviews Of Their De...

I would like to leave a review of the seller of my vehicle. It is a positive review of the dealer ProCarConsulting that sold me a Toyota Land Cruiser.

I Over Hauled Land Cruiser 1UR Engine And After Installed Engine No Acceler...