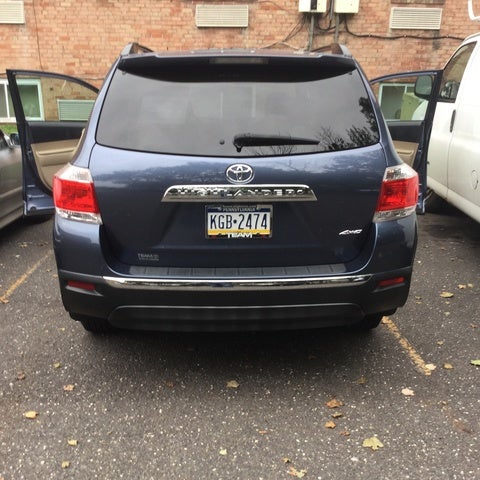 Average user score
3.5 ⁄ 5 stars
Based on 10 reviews
Review by Guru99LTJ2 — 2013 Highlander is a super car. It is the limited. The inside is extremely roomy for front and back passengers. Smooth ride. Super comfortable to drive and ride. Handles the road great. Love it. Mor... Read more
Review by Christopher — Its a good car but the pricing reflects that. The 2013 V6 models can all toe 5000 pounds. Read more
Review by GuruZLMTC — Good value, comfortable ride, easy to read controls and spacious Read more

Due for a 2014 redesign, Toyota adds a new trim level and standard equipment to its 7-passenger Highlander for 2013, just to sweeten the deal before everything changes. Most drivers of the 2012 are pleased, but there is quite a bit of room for improvement, most especially in materials quality, where drivers complain of lacking comfort below the top-shelf Limited and a few other missed details. Fortunately none of the big issues seem to permeate the entire lineup, so a thorough test drive can ensure you get the right Highlander for you.

The new Plus trim sits between the baseline Base and former midlevel SE. The Limited still tops the line, and the Hybrid made a return for 2013, but it is reviewed separately. The new Plus essentially takes the Tech Package out of the box and puts it into a trim, adding a backup camera now standard for all but the Base in 2013, lift-up rear glass window, fog lights, blackened details including the roof rails, easy-clean fabric upholstery and one-touch cargo helpers to the equally well-equipped Base.

Notably featuring 17-inch alloy wheels, rear privacy glass, a sliding and reclining 40/20/40-split folding second row, 50/50-split folding third row, air conditioning with rear controls and a 6-speaker CD sound system with auxiliary connectivity, all Highlanders, even the 2013 Base, are upgraded with a 3.5-inch display offering Bluetooth and USB connectivity. The Limited now features a JBL sound system, automatic second-row climate control and optional leather seats. Some of these tweaks note changes to the seats, but it's hard to tell whether they specifically address driver concerns—if the 2012 SE or Base seemed a bit hard on your derriere before, the 2013 Highlander might be worth a second shot.

That said, drivers of the 2012 warn not to get too excited and jump into the first Highlander you see. Some interior colors tend to cause an uncomfortable amount of light to reflect off the hard plastic dash, for example. Beware if your tested Highlander rattles at all, as this is a sure sign of sloppy manufacturing, which will plague your fuel economy and otherwise highly responsive handling. Beyond that, lack of a rain guard invites inclement weather to settle on the Highlander's seats when the door is opened, driver-accessible storage could be more ample, the GPS doesn't allow programming while in motion, and rear climate controls mean just that—other than on or off, second-row passengers are the only ones who can change a climate setting.

The same 2 engines carry over from 2012 with one difference—the inline 4-cylinder lost its towing option, leaving the V6 holding the flag for 5,000 pounds of maximum towing capacity. The 2.7-liter inline-4 sends a sufficient 187 hp and 186 lb-ft of torque to the front wheels through a 6-speed automatic at the cost of just 20 mpg city/25 highway. The optional 270 hp and 248 lb-ft of torque V6 (standard in the Limited) uses a 5-speed automatic for either 18/24 with front-wheel or optionally 17/22 with all-wheel drive. Drivers say a V6-equipped Highlander is definitely very fun to drive—and no wonder with just 7.5 seconds to 60 mph—with a remarkably smooth character, but do give it a good thorough test-drive before buying.

What's your take on the 2013 Toyota Highlander?

Kevin Hello I've just purchased a 2013 Highlander Plus AWD and immediately noticed that on bumpy payment the back window rattles. It currently has less that 120 miles and am hoping I have not made a bad decision. I've mentioned it to the salesman and was advised to make sure the window was closed properly etc.. Best, Kev

Have you driven a 2013 Toyota Highlander?
Rank This Car

Does Anyone Have Sunroof Leak Problems On A 2013 Toyota Highlander?

I have checked and rechecked my tire pressure, and it's fine. Even tried having the warning light reset when I had my oil changed. But the light stays on - annoying! Anyone else with this problem??

My 2013 Highlander Car Does Not Recognize My Key Fob But Will Start The Car...

My 2013 Highlander car does not recognize my key fob. However, I have not problem locking, unlocking or starting my care with it. The problem is that I lost the extra key fob and they cannot progr...

22 views with 1 answer (last answer about a month ago)

How Do I Upload Pictures From My MacAir?

I have pictures on my laptop, how do I upload them to my ad?

2013 Highhhhhlander 2nd Row Seat Back Will Not Go Back

how do you fix left rear seat that will not pull up?