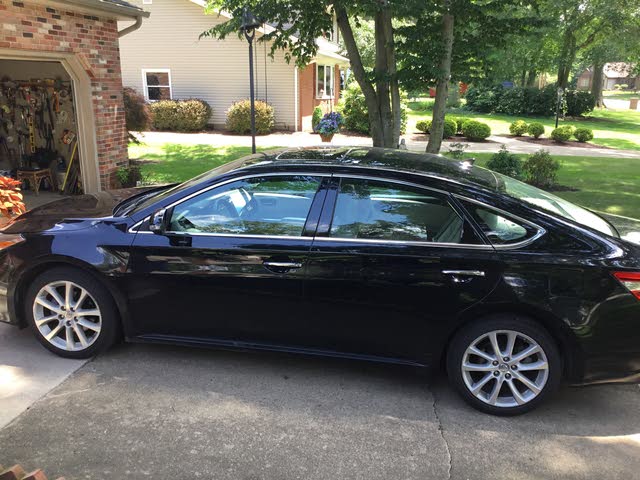 Toyota's full-size 4-door is totally new for 2013, with bold styling and jaw-dropping efficiency. Although the Base model still sports a more typical (and slightly sub-par) 21 mpg city/31 highway, the new Hybrid is capable of traveling up to 25 mph on battery power alone and offers a 680-mile driving range on a single regular-fuel fill-up with 40/39 mpg. Given exactly the same power rating as in 2012 (268 hp and 248 lb-ft of torque or a net 200 hp with the new Hybrid engine), zip-to-60 mph times still slipped to improve fuel efficiency, but they're no worse than 8 seconds. That sets the 2013 Avalon behind its 2012 counterpart but still leaves it competitive, and all of the efficiency changes (other than fuel efficiency) combined just might put the Avalon back on the map for a broader audience—or the styling could backfire and alienate its existing audience while winning no points otherwise for its middling performance.

The Avalon's new skin is an apparent page stolen from Hyundai's book, with a swooping belt line, rakish cabin and decidedly "thin"-streamlined sporting look. The giant front end of every Avalon features a conspicuous chrome-accented grille (something Hyundai didn't draw so much attention to for its Sonata Hybrid) that fetches the most criticism from potential drivers, but time will tell if Toyota is again the first to copy something genuinely original and improve upon it. Every other driver concern seems quite well addressed by Toyota, adding a classy understated dash, 1.6 cubic feet in the trunk to bring it to a full 16 available cubes, supportive seats, Entune, USB and satellite radio connectivity and a rear-view camera all standard across the board for 2013. Basically, if you love the Sonata's styling and upmarket features, you can now get them with Toyota's reliability, driving dynamics and pricey tag.

Toyota's Avalon offering expands beyond the new Hybrid for 2013, too, now including a top-shelf Touring edition beyond the usual Base and Limited. That sounds oddly familiar, doesn't it? In any case, given the lineup expansion, it's still unclear just what will be standard at each level, but highlights of potential features include a navigation system, heated and ventilated front seats, heated rear seats, tri-zone climate control and blind-spot monitors. Speaking of safety, a 10-airbag system is standard for the 2013 Avalon, as opposed to the previous 5 to 7. Even then the Avalon netted a top safety score in all categories, so it should surely do the same in 2013—or at least rate similarly to the latest Camry platform on which the Avalon is built. In that case the government crash tests rated frontal protection a point shy of their top score.

Compared to the 2012's execution, Toyota says the 2013 Avalon interior is more intelligently designed for additional comfort and reduced wind noise. To improve headroom, Toyota compacted the seat position and available sunroof so taller adults can enjoy the front seats just as much as the rear from 2012. The wheelbase is identical across models, but the 2013 version is smaller in every body dimension, so its interior roominess is quite a feat, and weight is down by at least 100 pounds, partly from this streamlining. The list of touch-ups for 2013 just goes on and on, from tire width to suspension tweaks, making it different enough that there's only one true way to know if the 2013 Avalon is right for you. Give it a try and let us know what you think—so far it sounds too good to be true.

Users ranked 2013 Toyota Avalon against other cars which they drove/owned. Each ranking was based on 9 categories. Here is the summary of top rankings.

Have you driven a 2013 Toyota Avalon?
Rank This Car

Add A Picture For Sale?

already have pictures from when I bought my car 9 months ago and want to use them,

I have a 2013 Toyota Avalon 3.5 L with 44,000 miles. What do I need to do a transmission drain and refill on this vehicle? Most of the driving is city driving Arizona.

29 views with no answers yet

Why Haven't I Had One Inquiry About My Car For Sale?

Why haven't I had one inquiry about my car for sale? I though I would have had several people asking about my car by now but there hasn't been one person inquiring. What's up with that. Is this a le...

How do I remove my car from selling on your website?