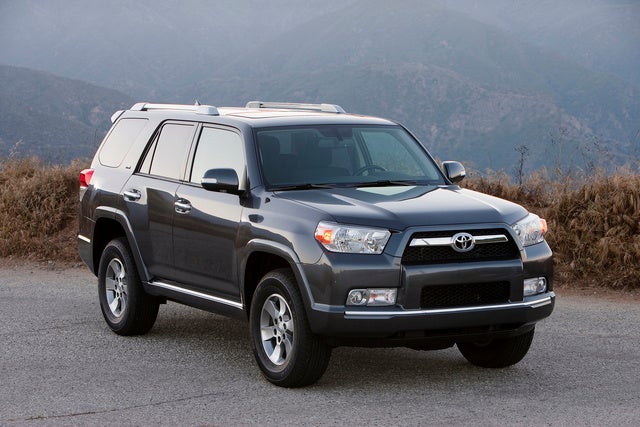 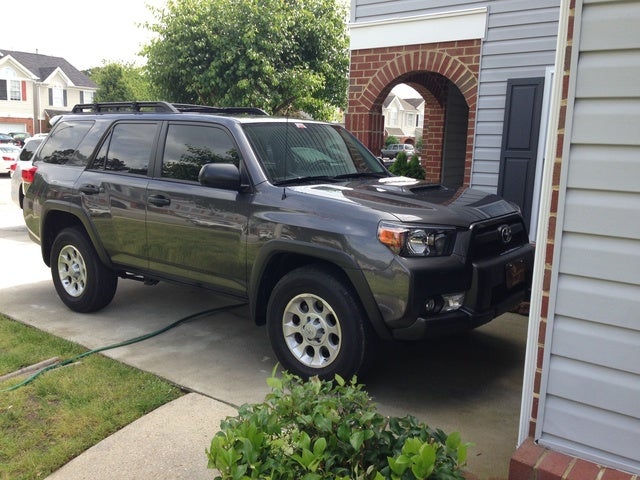 Without a single direct competitor, as Nissan's Pathfinder moves to a crossover platform for 2013, Toyota's 4Runner stands as the last fully capable full-size SUV with rugged body-on-frame construction. And rather than changing a thing, Toyota probably figures it can take the year off to get the redesign just right. Nobody has a solid finger on just what "insignificantly changed" between 2012 and 2013, but rumor has it the differences probably amount to paint colors. Not that anything needed to change—or at least nothing that worked as expected from the get-go. Quirks aside, the 4-wheel-drive (4WD) 4Runner is a consistent 4-star car-like truck with highly admirable off-road prowess.

As for those quirks, in an ironic reminder of the 4Runner's true SUV spirit, its 5-speed automatic transmission doesn't really like paved roads and tends to stutter trying to get off some starting lines. Toyota certainly isn't saying anything about the 4Runner's confusion with paved roads since the 2010 refresh, let alone whether that is adressed for 2013. The rear bumper also reportedly needs replacing so much Toyota can't keep that part in stock, and some drivers comment on the doors' tinny sound and a mystery rattle dampening acceleration in more than a few 4Runners.

Even if the issues present in their 4Runner don't detriment its abilities—like the tinny door sound—several drivers feel it's overpriced. That said, mid-winter Alaskan tundra or mid-summer beaching excursions are no trouble at all for any 4Runner, week in, week out, or day after day. It's just those pesky flat, dry and perfectly paved roads that cause grief for the 4Runner. Given the 4Runner's high standard of technology, you would expect it to cross terrain to pavement at some point, but if you discount the transmission issue and take an interest in the top-shelf Limited because it's touted as the most road-mannered of the bunch, its big tires dampen ride quality, and there's no other option due to its significant drivetrain accommodations specifically for those 20-inchers.

Contrary to Toyota's intentions, the base SR5 with its part-time, dual-range 4WD system or optional rear-wheel drive affords the most car-like ride. The full-time 4WD Limited offers the most features, of course, but no longer holds any road-tamed advantage in the hands of real-world drivers and even its automatic running boards are seen as a detriment, but its center locking differential certainly comes in handy. The off-road-specialized Trail uses the same part-time dual-range system as the SR5 but adds a locking rear differential and selectable terrain-sensitive electronic systems.

All 3 trim levels are powered by the same 4-liter V6 good for 270 hp, 278 lb-ft of torque and a 5,000-pound maximum towing capacity. If that's not indicative enough of its power, surely zip-to-60-mph times between 7.2 and 8.2 seconds will raise an eyebrow or two for this segment. The rear-wheel-drive SR5 gets by on 17 mpg city/23 highway, and surprisingly the 4WD systems are just 1 mpg thirstier on the highway. To be sure, power, utility and technology are high points of the 4Runner, which features things like skid plates, hill-start assist and hill-descent control, heated mirrors and a powered rear window even in the baseline model. Moving up to the Limited will add features like Entune, keyless ignition and entry, heated front seats with driver's power lumbar support and an integrated rear-view camera, just for starters. As mentioned in the 2012's Full Review, a fully loaded 4Runner definitely adds a certain secret-agent appeal to the weekly fishing trip. But if that old-school feel is more to your liking, Toyota also offers the remarkably capable FJ Cruiser.

tbonemccrash I have a 2013 4Runner. It is my second one-had a 2011 trail. This Limited unit sometimes starts vibrating when I accelerate. Sometimes it is slight and sometimes it is severe. Also, the 4Runner doesn't seem to shift right going down a slight decline. It tends to hold back in 4th when it seems to me it should shift to 5th. When I manually shift to 4th and then back to 5th, it shifts on its own to 5th. Anyone recognize any of this as an issue?

Users ranked 2013 Toyota 4Runner against other cars which they drove/owned. Each ranking was based on 9 categories. Here is the summary of top rankings.

Have you driven a 2013 Toyota 4Runner?
Rank This Car

Can 2013 Toyota 4runner Limited 4wd Get A Lift Kit

can 2013 Toyota 4runner limited 4wd get a lift kit installed without harming the vehicle suspension or handling? What is recommended lift height?

I am wondering if my 4Runner keeps track of when the alarm has gone off. I had a neighbor back into me and, believe it or not, her rear tire hanging on the back of her Jeep Wrangler actually stamped...

As I start to accelerate, my 4 runner will shake really bad. As I gain speed or just gun the gas, its stops.

I Have A 2013 4Runner, Can I Install Climate Control From A Limited Version...