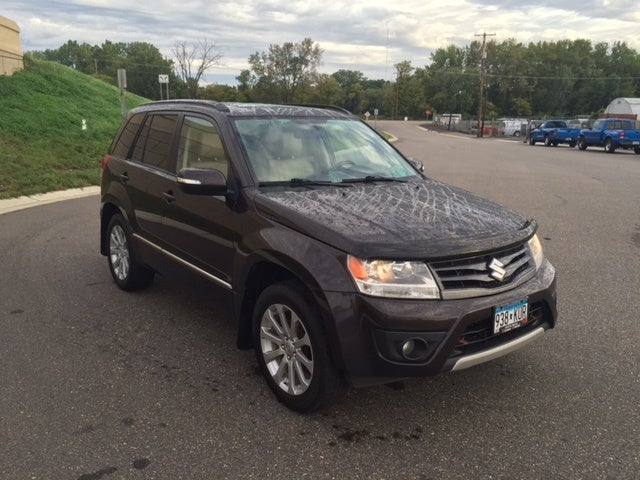 The Grand Vitara may disappoint some in its lack of total renewal for 2013, but the latest news from Suzuki will make those familiar with the brand very happy. The company's athletic 5-passenger SUV gains only a new front grille, front bumper and integrated infotainment system standard across the board, instead of the previously anticipated complete overhaul, but that and a year of rumors Suzuki might leave the U.S. market do not mean the maker is making an exit. No, being now 2 years overdue for a refresh doesn't seem to matter one bit.

Far from it, actually. Suzuki plans to spice up the Grand Vitara for 2015 with a style like the Kizashi 2 and room for as many as 7. Someone out there is dancing. If it isn't you, then either you're single, or you never have had the pleasure of owning a Suzuki. Toyota may have the monopoly on a widely known reputation for reliability, but there's a few good reasons why Suzuki services over 40% of India's equally sizable market. If U.S. drivers are any indication, the Grand Vitara continues to exemplify many of those reasons, most notably and primarily reliability, rugged capability, excellent value and fuel economy that often exceeds advertised numbers. On the downside, drivers say there could be more room in the trunk; magazines say comfort is lacking when it comes to long-distance trips, and curbside loading can be a hassle with the Grand Vitara's passenger-side-hinged rear cargo door.

Otherwise, even long-term owners couldn't be happier despite bold moves in recent years that have tended to tick people off. For instance, 2012 saw the complete elimination of a V6 engine option, and a full-size spare tire became extinct for all but the top-shelf Limited. Even though the sole remaining 2.4-liter inline-4 engine choice, good for 166 hp and 162 lb-ft of torque, sprints to 60 mph in a sub-par 10.2 seconds, some drivers still venture to say the Grand Vitara is fun to drive, albeit distinctly truck-like.

All but the bottom-line Base are available with 4-wheel drive (4WD) that surprisingly only knocks 3 mpg off the highway figure for 19 mpg city/23 highway, while default rear-wheel drive versions get 19/26. The Base gets only a 5-speed manual, while the Premium and Limited are offered only with a 4-speed automatic, though the 4WD Limited also affords low-range gearing. Properly equipped, any Grand Vitara can tow up to 3,000 pounds, but its 28 cubic feet of cargo space before folding down the 60/40-split fold-and-tumble second row to expose all 70 cubes for cargo should handle most anything without needing a trailer. Unless of course you're trailering for an adventure, in which case the Grand Vitara's part-truck part-car construction is quite handy.

The Base comes well-equipped, featuring things like automatic headlights, keyless entry, automatic climate control, full power accessories, a tilt-only steering wheel, integrated Garmin navigation and infotainment system with voice commands and Google search, plus a 4-speaker stereo with CD player and auxiliary audio jack, but it's the only trim left in the cold for a lot of options, namely Bluetooth and the newly available mirror-integrated turn signals and chrome trim for 2013. The Premium adds rear privacy glass and cruise control, or additionally heated mirrors in a 4WD edition, but you will have to ante up for the Limited to get a sunroof, roof rack rails, keyless ignition/entry, leather upholstery and a 7-speaker premium sound system.

What's your take on the 2013 Suzuki Grand Vitara?

Users ranked 2013 Suzuki Grand Vitara against other cars which they drove/owned. Each ranking was based on 9 categories. Here is the summary of top rankings.

Have you driven a 2013 Suzuki Grand Vitara?
Rank This Car