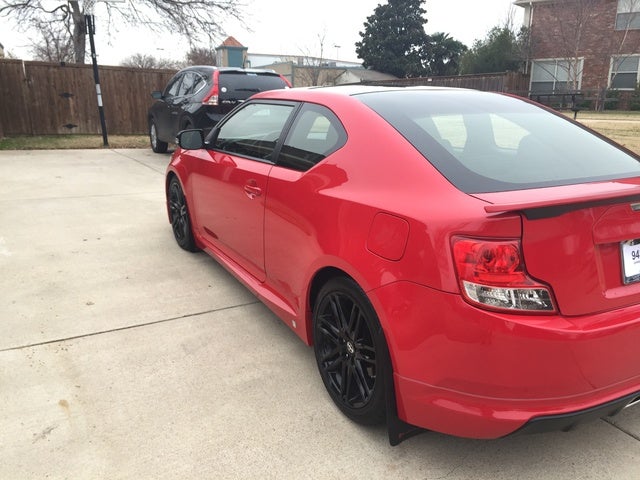 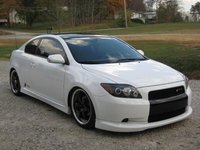 Some compact coupes look small but feel big—the 2013 Scion tC carrying over from 2012 is a case for the opposite point. Leaving behind its bubbly baby-face facade, Scion raked in the roof and cut back on materials quality for the 2011 tC, and these detriments carry into 2013 still pretty much untouched. So, too, do its spirited performance and balanced driving dynamics carry over, with an otherwise pleasing and efficient cabin, albeit expectedly tight given the de-facto sunroof. It's due for a refresh, so look forward to something mechanically new very shortly, or at least a cabin refresh.

The outside of this volume-selling hatch for Scion is a drool-worthy tip of the hat to every dreamy muscle car ever made, from the Corvette to the Mustang, with all of the Celica's mainstream appeal added in for good measure. From the top you see the 'Vette pointed hood, at the side you see hints of the 'Stang raked A-pillar rear, and everywhere else the Celica shines through in all its maneuverable smallness and squared features. A perfect blend of every driving enthusiast's first love, the tC has continued to top Scion's sales charts since the 2011 redesign. Of course, making it all the more enticing are those special kits dealers have in store to customize your new Scion ride.

Inside is still a point of contention for some, but really only for materials sticklers. Sure, the sole engine choice—a 180-hp 2.5-liter four-banger—leaves some wanting a bit more of the pep implied by the cover of the tC, but take another look at that sticker price and re-adjust your perspective. The 2013 tC is a spirited and practical, yet economical, entry-level ticket to sexy retro reliability with roomy seating for 5. Good for 23 mpg city/31 highway with 34 cubic feet for cargo—or ample legroom for 6-foot-friends in the reclining rear seats—the standard 2.5-liter engine sprints this front-wheel-drive machine to 60 mph from a standstill in 7.6 seconds with the 6-speed manual, or 8.3 seconds when coupled with the 6-speed auto-manual.

To be sure, the tC is neither a true sleeper sport nor a sleeper luxe. Hard plastics adorn the majority of the interior, and a few softened touches were added for 2013, but not especially where it counts—namely, the rock-hard armrest. Still the interior is easy on the eyes, if a bit harsh to the touch, as the same sumptuous sense of style carries through the cabin. The smooth and predictable ride is a big win next to its highly practical easy-fold front seats, tilt and telescoping steering wheel, height-adjustable safety restraints for all and convenient compartments in the cargo area. Perhaps if you were to call the tC a sleeper-anything, it would likely be a short crossover ute.

Practical as it is, the 2013 Scion tC is still tech-savvy. Highlights of the standard features list include that previously mentioned sunroof plus cruise control, steering-wheel-mounted audio controls, satellite radio and power windows, locks and mirrors. The basic Pioneer sound system sports iPod and USB connectivity, but an Alpine Premium system is available with a 4.3-inch color touchscreen interface and a variety of inputs as well as subwoofer compatibility.

Users ranked 2013 Scion tC against other cars which they drove/owned. Each ranking was based on 9 categories. Here is the summary of top rankings.

Is a Scion TC a good car and will it hold its value? Curious because I am looking into purchasing one....

123 views with 2 answers (last answer about a year ago)

Car engine turned off while idle. Check engine light and oil light turned on. Battery light also. Turned the car back on no lights were on. No warning lights of any kind.

I like everything about the tC EXCEPT the low profile tire; hate the look. Can smaller wheels and bigger tires be used on the tC?

Can I Use Stainless Steel Rivets Instead Of Plastic Push Pins?

Hello good community! I'm not sure if this is a model thing, but my plastic fender inner panels keep falling. I've had 3 replacements already. The plastic push pins (OEM pins) fail often and I have ...