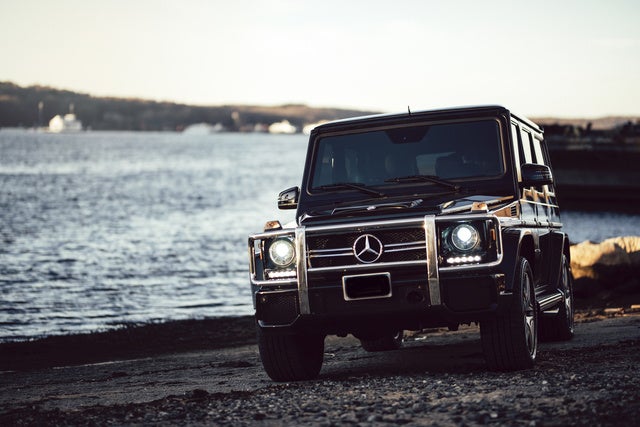 Since its debut in 1979, the Mercedes-Benz G-Class has led the pack in the luxury SUV market. The boxy 4-door’s distinctive silhouette has changed little since inception; its simple design manages to make elegance functional, and it has become the choice of Popes and Ambassadors the world over. For 2013, 2 trims are available: the G550 and the uber-classy G63 AMG.

While little flourishes like daytime running lights and new exterior mirrors have been added, G-Class staples such as a passenger-side grab handle, chrome-accented switches and center-console shifter are retained. The G63 AMG is fitted with a distinctive black-and-chrome grille, new bumpers with larger air intakes and 20-inch rims. The G63 has a standard Eco Start/Stop feature that quietly kills the engine, much like a hybrid, when the vehicle is idle. According to Mercedes, this helps increase fuel efficiency by 13%, but with a 6-figure price tag and low-2-digit mileage, is that really a selling point?

The biggest changes to the Geländewagen are in the cabin. The center stack has been redesigned with an infotainment touchscreen that reminds one of an iPad in both form and function, and the dash now sports a color display and round dials. New wood paneling options add even more luxury to the stylish-but-small interior. It’s still a little difficult to get inside, but once seated, you will be pampered.

Also on tap is an update to the COMAND interface, which includes mbrace2, a series of apps that connects the driver to the vehicle via smartphone; it allows drivers to send driving directions to the onboard navigation system as well as connect to info about weather and local restaurants. Other new tech-on-tap includes a standard blind-spot warning, parking and hill assistance, as well as improved stability control.

The G-Class has retained its position at the top by not messing too much with its looks while quietly retuning its features. It may not be the most nimble vehicle in the stable, but the prestige of owning one makes up for any design flaws.

What's your take on the 2013 Mercedes-Benz G-Class?

Ted In addition to the price, other dealer fees include Pre-Delivery Inspection $979, Destination Charges $995, Document Processing Fees $960, and Reconditioning Fees of $3,495 or less (may vary depending on the vehicle). These charges represent additional costs and profit to the dealer including items such as inspecting, cleaning, and preparing documents related to the sale

Have you driven a 2013 Mercedes-Benz G-Class?
Rank This Car