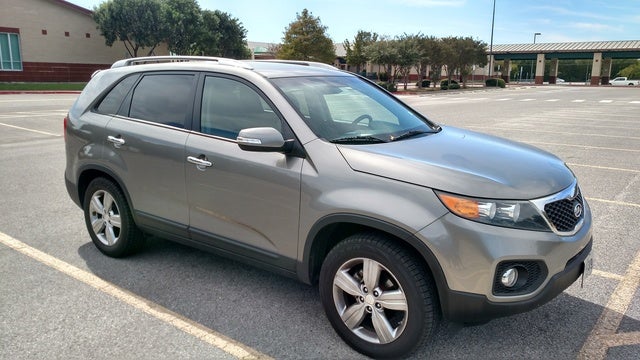 For its second-generation refresh leading up to a 2015 redesign, Kia sweetened the deal on a 2013 Sorento with a few standardized features, new options and a modernized style. This volume-leading American-made midsize crossover may well be on the smaller side of its class, but there's a lot more than hot air inside. Weighing in at no less than 4,000 pounds, the remarkably well-appointed Kia Sorento is known for dropping jaws—and given this 2013 update with body-color and silver accents, it's building a legacy of turning heads, too.

There wasn't much room for improvement given the Sorento's history of converting even luxury buyers into Kia fans, so it looks like the 2013 lineup basically stays pat minus a Base offering. There's still a choice of 3 engines mated to a nearly flawless 6-speed automatic that pushes power to the front wheels (FWD) by default, or all wheels (AWD) optionally, but so far it appears just the LX, EX and SX trims will return for 2013 to make up the baseline, middle and top of the line, respectively.

As such, pricing and features have changed a bit, mostly to lower the starting tag on the SX, but there are as yet no details on how it will be repackaged. However, we do know the V6-equipped LX gets that roomy third row standard, while 7 passengers remain optional for V6-equipped 2013 EX and SX models. Leather seating is now standard in the EX, the Microsoft-powered UVO infotainment system joins the LX's options list, and the SX now visually differentiates itself with a chrome exhaust tip, LED taillights and larger 18-inch alloy wheels.

Aside from those few tweaks, the 2013 Kia Sorento is the very same Sorento so many renters have fallen for already. Although the baseline unmodified 2.4-liter 175-hp 4-cylinder offered in the EX can be anemic at times, there's always the option to snag the tweaked 191-hp and 181-lb-ft/torque version of the same 4-cylinder, or the LX- and SX-default 276-hp and 248 lb-ft V6 good for 3,500 pounds of towing know-how. All that power comes at the cost of 20 mpg city/26 highway, but the 4-cylinder can get as much as 22/32 mpg, manufacturing mishaps aside. (A good few lemons made it past QC for 2012, so make sure you test-drive the one you're taking home at the very least.)

If the now-baseline LX comes equipped like it did for 2012, feature highlights include heated side mirrors with integrated LED turn signals and a second-row armrest. The Convenience package adds fog lights, roof rails, rear parking sensors, heated front seats, a backup camera with rear-view display and the modified 4-banger for FWD models or third-row seating for V6-equipped LX Sorentos.

The 2012 EX notably added keyless ignition/entry, rear parking sensors, rear air-conditioning for V6 models, a leather-wrapped steering wheel and shift knob alongside the voice-activated UVO infotainment system, standard—but the new X Convenience Plus Package available to both the EX and SX adds those leather touches plus an 8-way powered driver's seat, so the standard offering for 2013 is still somewhat in question. The performance-inspired SX came loaded for 2012 with EX options in addition to more aggressive styling, a sport-tuned suspension and metallic interior accents. It's pretty safe to assume whatever the 2013 EX becomes, the SX will be it, loaded and sportier.

Users ranked 2013 Kia Sorento against other cars which they drove/owned. Each ranking was based on 9 categories. Here is the summary of top rankings.

Have you driven a 2013 Kia Sorento?
Rank This Car

I have a 2013 kia sorento recently the ABS, traction control, down hill assist and parking brake light hase come on. I have a scanner and i have tried to figure out the problem with no luck. The AB...

We bought our 2013 Kia Sorento in December 2018 (6 months ago). At the time we bought it, all safety recalls had been completed. This Thursday the engine seized. Long story short we are towing it ...

How To Fix A Brake Light Outage?

My left brake light is out on my 2013 KIA Sorento. The bulbs are good. Could it be a fuse? And if so, what fuse is it? None of the diagrams reference brake lights.

Radiator Fan Remain On After Ignition Off

I had already off ignition but radiator fan is still on how can we stop it.