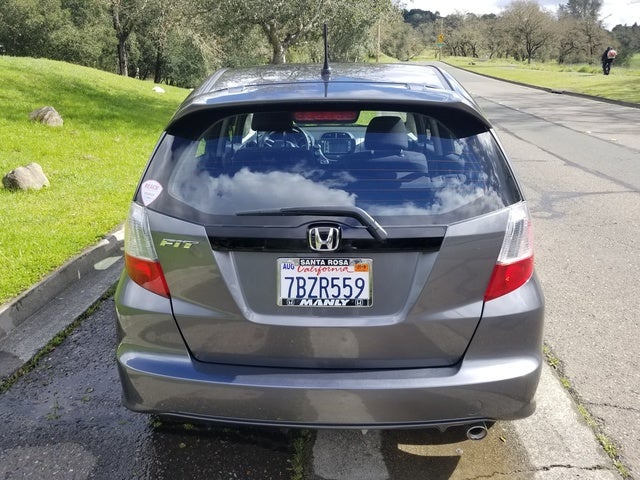 Average user score
4.7 ⁄ 5 stars
Based on 5 reviews
Review by Timothy — Very reliable car. I had purchased a Honda Fit in 2013 and used it for business. I have retired the car at 585,018 miles. Because of its reliability, I have replaced my first 2013 Honda Fit with a ... Read more
Review by Steven — Great deal and overall a very good car. Its small, but still very roomy even for someone as tall as me Read more
A Good Car For A Small Family. by ArbitraryScreenName — It's a Honda so it's reliable. With only 23,000 miles on it I can't comment on durability. The interior is well designed and controls are intuitively obvious. Seats are comfortable and the adjust... Read more

The Honda Fit subcompact rolls into 2013 with a new exterior color option, Midnight Plum Pearl, which replaces the previous year's Orange Burst Metallic color. Other than that, the Fit remains essentially unchanged after receiving a number of interior and exterior updates for 2012. Reflecting the lack of new features for 2013, the Fit's pricing also remains unchanged from the previous year.

But even as the Fit goes on cruise control for the model year, it continues to garner awards and accolades. The 2012 version was named a Top Safety Pick by the IIHS and one of the 10 Best Cars of the year by Car and Driver magazine, while U.S. News & World Report tagged the Fit as the best vehicle in its class (tied with the Ford Fiesta), beating out such competitors as the Hyundai Elantra, the Chevy Cruze, the Toyota Prius and the Mini Cooper. It also won a Subcompact Shootout competition staged by USA Today and MotorWeek.

The Fit continues to offer a number of benefits to buyers on a budget, including its nimble handling, good fuel economy, solid list of standard features and ample cargo space thanks to a fold-down rear Magic Seat. In addition, even though it's a subcompact, the Fit offers such upscale features as steering-wheel-mounted paddle shifters and available navigation.

As in previous years, Honda offers the 5-door Fit at Base and Sport trim levels, with add-ons such as navigation available at the Sport level. In addition, Honda has recently started rolling out limited editions of its new Fit EV electric vehicle in select markets, such as California.

Power for the Honda Fit comes from a 1.5-liter i-VTEC 4-cylinder engine, which generates 117 hp and 106 lb-ft of torque. The engine links to either a 5-speed manual transmission, which comes as standard equipment, or an available 5-speed automatic. The engine delivers plenty of pep off the mark but can sometimes struggle at highway passing speeds or on hills. Fuel economy numbers check in at 27/33 mpg with the manual transmission and 28/35 with the automatic.

Inside, the Honda Fit seats 5 passengers, though space can be tight in the second-row seat for 3 grown adults. With the rear seat up, the Fit offers a versatile 20.6 cubic feet of storage space, which expands to 57.3 cubic feet with the rear seat folded down.

When equipped with the 5-speed automatic transmission, the Sport trim also gets steering-wheel-mounted paddle shifters. In addition, Honda offers its satellite-linked navigation system with voice recognition, Bluetooth, a 6.5-inch color screen and 16GB of flash memory as an optional feature for the Sport trim.

The Sport gets a few exterior enhancements as well, including foglights, side underbody spoilers, a rear roofline spoiler and a chrome exhaust finisher. All Fit trims come equipped with power side mirrors and halogen headlights. The Base trim rides on 15-inch wheels, while the Sport trim gets 16-inch alloy wheels.

Most owners agree that, as a commuter car, the Fit is hard to beat, since it delivers great versatility and functionality as well as value. Its nimble handling and good fuel economy numbers appeal to buyers on a budget who want something a little more exciting than the standard subcompact. In addition, improvements made in 2012 to reduce cabin noise have made a good car even better. On the other hand, some owners find the Fit's acceleration too slow and wish its fuel economy numbers were a little better. Despite a few complaints, however, the Fit gets generally good marks from owners as a capable daily driver.

Users ranked 2013 Honda Fit against other cars which they drove/owned. Each ranking was based on 9 categories. Here is the summary of top rankings.

Have you driven a 2013 Honda Fit?
Rank This Car

I'm so confused... according to my owner's manual, my maintenance minder doesn't mention replacing the water pump on my 2013 Honda Fit. I even looked in the index in the back of the manual, and I c...

When should the timing belt be replace on my 2013 Honda Fit, at a certain mileage?

Hi my car is posted on here for sale. I only have 1 accident but it's saying there are 2 accidents??? Help?