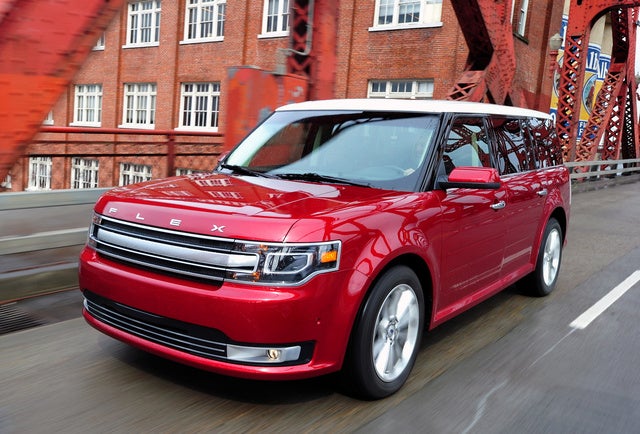 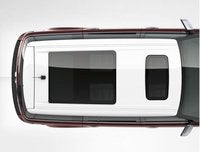 Though still a bit quirky, the 2013 version of the Ford Flex has just a bit less of the edginess it once boasted. Softer corners and a distinctly un-Ford-like nose with a solid chrome band, svelte headlights…and no more Blue Oval, gives this year’s version of the automaker’s well-received 7-passenger crossover a nearly Range Rover-like appearance, while the standard V6 gets 23 more ponies and 7 more lb-ft of torque. The upscale Titanium trim has also been dropped from the lineup, leaving for now the base SE, midlevel SEL and top-shelf Limited trim selections. A bunch of revamped amenities and gizmos are also offered this year, including available MyFord Touch electronics integration, remote keyless entry and ignition, BLIS (Blind Spot Information System), automated parking assist, adaptive cruise control and power-adjustable telescoping tilt-wheel steering. Finally, electric power steering is now standard across the lineup. Of course, all trims are once again available in all-wheel-drive (AWD) versions, with front-wheel drive (FWD) the standard configuration. All trims come with standard three-row seating, and cargo area remains 83.2 cubic feet with the rear seats folded.

As usual, Ford’s large crossover gets some competition from the likes of its Explorer kinfolk, not to mention G.M.’s roomier Acadia, Enclave and Traverse offerings, and from Dodge’s muscular Durango, too. For those who are into gizmos and gadgets, however, the Flex offers more than its share, with some nifty moves and a quiet ride to boot.

The up-powered 3.5-liter variable-valve-timed V6 is delivered with all trims and combines with the standard 6-speed automatic transmission for 285 hp and 255 lb-ft of torque. EPA-estimated mileage is 18 mpg city/25 highway in FWD trims, and 17/23 in AWD variants. The Limited, meantime, can be delivered with an available 3.5-liter turbocharged EcoBoost V6 and 6-speed shiftable automatic transmission that features steering-wheel-mounted paddle shifters. The turbocharged six-banger is available only with AWD, thus mileage drops to 16/23, burning recommended premium unleaded. Adding the available Class III towing package with trailer sway control to either engine choice will top out trailer-towing capacity at around 5,000 pounds, while full-time AWD trims are managed by a mechanical limited-slip center differential.

Rear-seat DVD entertainment is available lineup-wide, as are a roof rack with side rails and a second-row console that comes in handy, but limits seating to 6 passengers. With the SE and SEL eligible for a number of items that are standard for the Limited, look for such available extras as voice-activated GPS, the posh Titanium Package (with 20-inch chrome-clad wheels, MyFord Touch/SYNC interface with touch-screen displayes, upgraded leather and unique cabin trim) and power-adjustable pedals on both the higher trims. The Limited, finally, is additionally eligible for an available refrigerated second-row console and multi-panel Vista Sunroof with power-opening front moonroof, not to mention Adaptive Cruise Control and, for those who find parallel parking a chore, Active Parking Assist.

Owners of the 2012 Flex complain mainly of less-than-perfect brakes, some issues with SYNC voice-directions navigation, a few oddly placed cabin storage areas and cupholders, and a lack of turn-signal-integrated mirrors. On the plus side, most folks are pleased with the oomph from the turbocharged EcoBoost V6 when combined with its well-mannered 6-speed shiftable transmission. Handling, quietness and the plethora of high-tech goodies, gremlins and all, are each found praiseworthy in the 2012 Flex, while it’ll be interesting to see if the new upgrades will relieve some of the previous contentiousness regarding this hefty crossover’s unique look.

Have you driven a 2013 Ford Flex?
Rank This Car

When I turn the air on driver side works perfectly fine but passenger side kicks out warm air. Any suggestions please

I have a 2013 ford flex, can I get smaller rims for this car so I can get 10 ply tires, I live on dirt and rocky roads and keep getting to many flats, Our tires are 4 ply and we can't get a higher p...

Can I Put Diesel Fuel In A Flex Fuel Vehicle?

116 views with 3 answers (last answer about a year ago)

2013 Ford flex.interior lights fail to turn off after keys removed and doors are shut

191 views with 1 answer (last answer about a year ago)