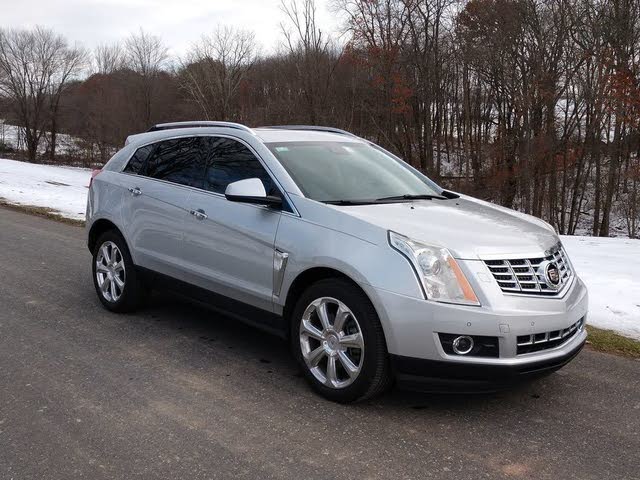 The SRX, Cadillac’s best-selling midsize luxury crossover of 2011, gets a mild exterior refresh for 2013. The front end gets a tiny tweak to the bumper and grille and LEDs dotting the front vents, along with some new interior and exterior colors and re-styled 20-inch wheels. The SRX’s real improvements, however, have been saved for the interior.

Little touches like lustrous wood trim and chrome accents promise to add a new level of elegance. But the real crowd pleaser will be the integration of Cadillac’s CUE system on a large, 8-inch screen. With proximity-sensing technology and “haptic feedback” (the tactile satisfaction of feeling an actual click,) users can easily navigate amongst a variety of functions. These include climate, smartphone and audio controls. Behind the screen is a new hidden storage compartment, which also contains a USB port.

The center stack controls have been cleaned up and simplified to four: On/Off, Volume Up, Volume Down and Home. Up to 10 (!?!) Bluetooth devices will be able to connect to CUE. HD radio will be standard, as well as additional USB ports and a 12-volt power outlet.

The SRX will be available in Base, Luxury, Performance and Premium trims, with AWD available for all levels except Base. Although specifics have yet to be released, the trim levels are expected to be in line with last year and will likely contain features represented by their respective titles.

A new 308-hp direct-injected 3.6-liter V6 with 265 lb-ft of torque (which can also be found in the CTS and Chevrolet Camaro) will be the only engine available for the SRX in the U.S. This is good news, as many complained the previous engines didn’t quite deliver enough power. The previous SRX’s 6-speed automatic transmission will be standard. The same 17 mpg city/24 highway is estimated, with 1 mpg less across the board for AWD versions.

The new technology boost also extends to safety features, with the SRX now offering Driver Awareness and Driver Assist packages. These utilize not just cameras, but also radar and sonar, to offer the most accurate tools to prevent accidents. The SRX will automatically put on the brakes, for example, if a crash is anticipated. Blind zone and rear cross-traffic alerts are standard, as well as antilock brakes and front- and side-curtain airbags.

Cadillac is attempting to recapture its glory days with its new lineup, and the SRX helps lead the charge by keeping its looks the same, but revamping its heart and guts. After all, beauty is more than skin deep.

Users ranked 2013 Cadillac SRX against other cars which they drove/owned. Each ranking was based on 9 categories. Here is the summary of top rankings.

Have you driven a 2013 Cadillac SRX?
Rank This Car

This light came on while unsuccessfully trying to reprogram fobs

I placed a new battery in my key fob 2013 Cadillac SRX because it was appearing to be losing power. Now I Cannot get car to start or get the fob to lock or unlock the car. Got our second key fob ...

I want to buy a car from an individual on car gurus and he has a balance, can i purchase thru you and pay off his balance so he can transfer ownership to me thank you. title held my GM financial rick...

Accidentally left my 2013 SRX Key Fob in a pair of jeans pocket and it went three the washing machine. I can start the car by putting the fob in the center console transmitter pocket but the remot...

Intermittent No Electrical Power And Battery Not Dead

491 views with 2 answers (last answer about a year ago)