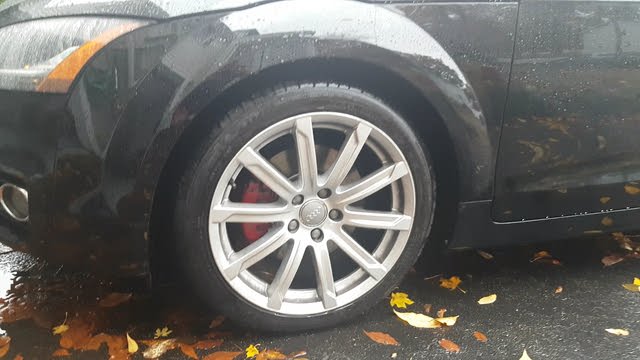 Nothing new this year for Audi's TT, still reeling from the introduction of the monstrous TT RS in 2012. Built like a Golf and looking like a Beetle, the TT has had a strange history in its short lifespan. It was plagued by handling mishaps in the beginning and criticized for being an overpriced Rabbit, but it’s still found a following in the automotive world. Now one year since the debut of the TT RS, Audi hopes its little sport-inspired offering will finally settle down into acceptance before they revamp it again.

Not many surprises here, as the recipe has been a familiar one for more than a few years. Base 2.0T trims come in 4-seat hatchback and roadster flavors, both powered by a 211-hp, turbocharged 4-cylinder engine. You’ll have to wait until 4,300 rpm to enjoy the full power of those ponies, but 258 lb-ft of torque is the more applicable—and more often ignored—figure, and it’s available at just 1,600 rpm. You can also have the TTS, which will get you a substantial boost of 54 hp, but they don’t arrive until 6,000 rpm. Torque figures remain the same at 258 lb-ft, but they are a tad tardy here, not making an appearance until nearly 1,000 rpm later than in the base 2.0T: 2,500 rpm.

That accounts for many of the complaints around the TT, as the fun factor is missed a bit with the “upgraded” TTS. Mostly you’ll feel the pang of that old enemy turbo lag, a characteristic that’s fast disappearing on even budget turbo offerings. It's an added insult from a supposedly luxury make like Audi.

It’s doubly a shame, as the TTS comes with a sport suspension and a new Haldex all-wheel-drive (AWD) system as opposed to the standard Audi Quattro AWD system that’s standard on the base TT. Thankfully the suspension is at least available as a standalone option.

Either trim comes with a 6-speed DSG automated manual transmission that has been lauded for its smoothness in operation and will return 22 mpg city/31 highway regardless of engine tune.

If you’re still not satisfied with the available power profiles and don’t mind giving up the drop-top option, the TT RS offers a wholly different situation by way of a completely new drivetrain. Here, a 2.5-liter inline 5-cylinder engine is turbocharged for 360 hp and 343 lb-ft of torque. Audi fans of old will remember the 5-cylinder mill from the legendary Quattro rally cars, and engineering fans will appreciate the added smoothness 5 pistons provide over 4.

Regardless of your intellectual or historical leanings, everyone should appreciate the 6-speed manual transmission of the TT RS, not to mention its stout power, performance suspension, Haldex AWD system, upgraded brakes and titanium exhaust. And this is ignoring its 4.1-second 0-60 time, as well as a respectable mileage rating of 18/25. But none of this can be seen from the outside, and if you’re going to drop the extra dough on the RS edition of your favorite little sport coupe, you want people to know it before you leave them at the line. With that in mind the RS is fitted with unique wheels and a big rear spoiler that helps keep the rear planted on the way to its 174-mph top speed.

Here in North America we have to make due with the coupe version of the TT RS alone, while the European market enjoys a convertible version as well, in addition to the option of the 7-speed, S-tronic, dual-clutch tranny. They also get an upgraded version of this upgraded version—the TT RS Plus, which sports 355 hp amongst other upgrades. It’s a bitter pill to choke down, but since the TT is scheduled for a redesign in 2014, you’ll only have to suffer briefly. Of course, that’s also a good reason to wait a year before indulging those desires for a sporty little German vehicle.

Hi there Hoping someone can help. I just bought a 2013 Audi TT TDI Quattro, put the key in and everything lights up and when you turn to on nothing. We put jump leads on it from the points under t...

Where Do I Get Donut Tire?

My Donut tire of Audi 2013 A-4 Quattro is warn out. Need replacement used tire.Or, need regular wheel and tire to use as a spare tire.